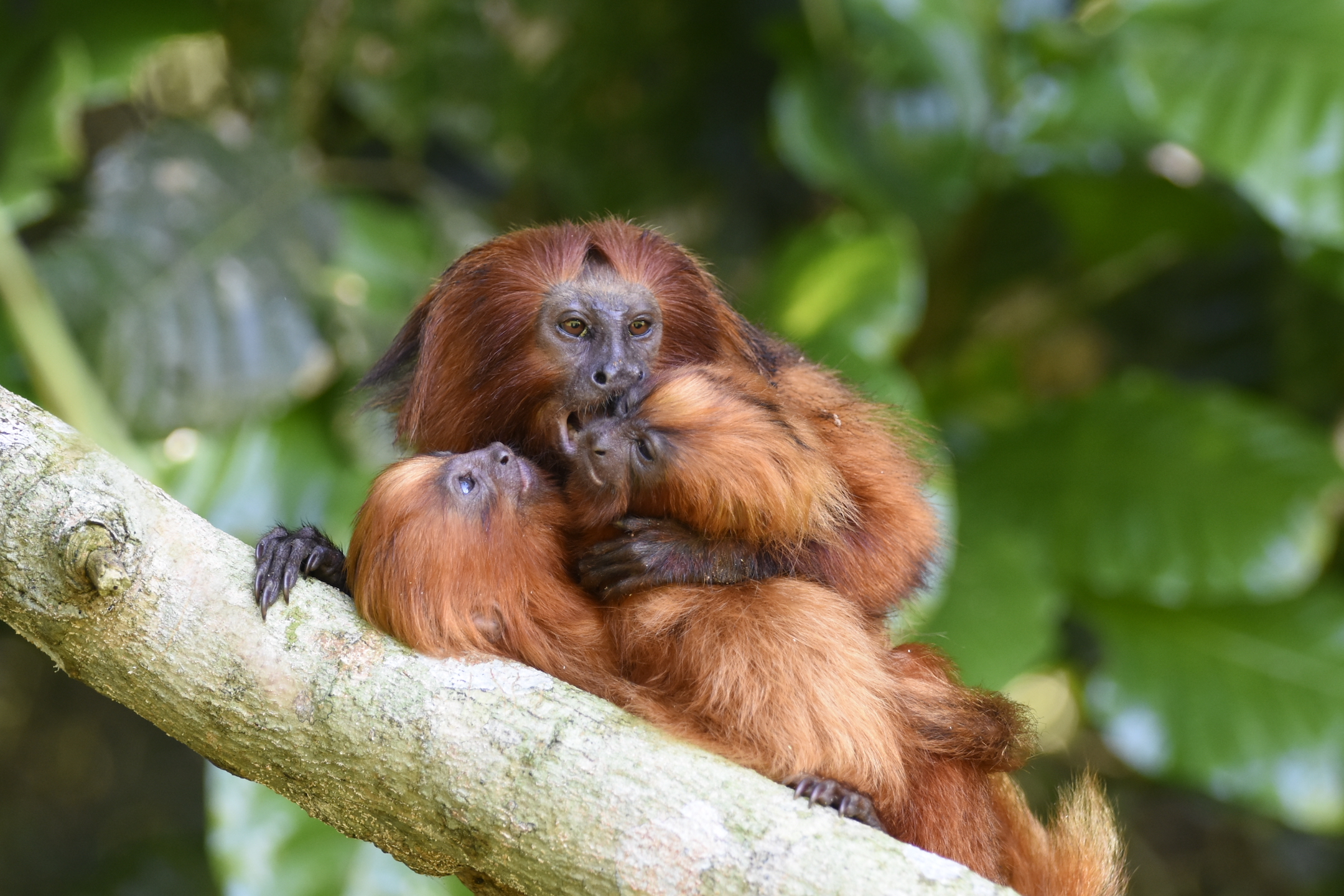 Experts at two of Brazil’s leading wildlife conservation bodies are on high alert following a spate of seizures of hyacinth macaws and golden lion tamarins from alleged traffickers in recent years.

The illegal wildlife trade was what drove the hyacinth macaw (Anodorhynchus hyacinthinus), the world’s biggest flying parrot species, and the golden lion tamarin (Leontopithecus rosalia), a spectacularly colored monkey, to the brink of extinction in the 1980s. Since then, the respective efforts of the Instituto Arara Azul and the Associação Mico-Leão-Dourado (AMLD) have served to reverse those trends.

Though the trafficking problem never fully went away for these animals, it was greatly reduced by the work of these NGOs to educate the government and communities in the regions where the species live. The institutions managed to bring together a number of other organizations to protect the two species, which have become symbols of Brazil’s biodiversity.

The hyacinth macaw was removed from Brazil’s red list of threatened species in 2014. Since then, an increase in seizures of birds and eggs from traffickers have caused alarm, says Neiva Guedes, president of the Instituto Arara Azul. “Punishment is stiffer for trafficking animals at risk for extinction. Those who work with hyacinth macaws are specialized groups with few people involved. Removing the species from the list made these traffickers’ lives easier,” Guedes says.

She questions the message being sent to the public and government agencies when a species is removed from the threatened list. “Being taken off the list isn’t an incentive for trafficking, but we begin to turn a blind eye because of the rationale that if there is an increase in the number of blue macaws, there isn’t as much need for monitoring agencies and the public to work at protecting them,” Guedes says.

The hyacinth macaw was added to the Ministry of the Environment’s red list twice, in 1989 and in 2003, and is currently classified as vulnerable on the IUCN Red List. Under CITES, the global wildlife trade convention, it falls in Appendix I, meaning its international trade is strictly prohibited for commercial purposes.

Guedes says that shortly after the release in 2014 of the current national red list, from which the hyacinth macaw was dropped, police seized an adult female and two eggs in the municipality of Bela Vista, on the border with Paraguay. The bird ended up dying and the eggs failed to hatch because they weren’t handled properly on the way to the Campo Grande Wildlife Rehabilitation Center (CRAS).

Another case that stands out for Guedes was on Oct. 20, 2017, when a 25-year-old Chinese woman was detained at the airport in Taipei, Taiwan, with 49 hyacinth macaw eggs hidden in a carry-on bag with a heater; the eggs were found to have live embryos in them. The woman had arrived from Paraguay, where she said she had an uncle. The man was later found to be one of the main traffickers of macaws, parrots, toucans and even raptors from South America to China.

The route via Paraguay

Following the Taiwan seizure, investigations were carried out to try and identify how Chinese bird traffickers were stealing and transporting Brazilian birds via Paraguay. Authorities found that Bela Vista in Mato Grosso do Sul state, which lies just across the border from the Paraguayan city of Bella Vista Norte, was the point of transfer for eggs and animals leaving the country. The urban areas of the two municipalities are separated by the Apa River and connected by a bridge.

On Sept. 25, two Paraguayans were arrested in Bela Vista by the Military Police and found to be carrying an adult female macaw inside a bag. The couple, who live in Bella Vista Norte and were driving a car without license plates, said they had captured the bird on a farm on the Brazilian side of the border. The macaw was later released after being examined.

Guedes says she is concerned not only with the increase in trafficking but especially with the fact that traffickers appear to be targeting adult females. The illegal trade used to focus on eggs and chicks because they’re easier to transport. “Now they are taking everything. Removing a female of reproductive age means that many generations of the species will be lost,” Guedes says. “Females begin to reproduce at seven or eight years of age and will do so for about 28 years. The impact is much greater than with the theft of eggs.”

“Also they are Paraguayans, and one doesn’t need to cross the border to Brazil to traffic this species because they have them in Paraguay as well,” he added.

Mongabay sought comment from the Federal Police and IBAMA, the federal environmental protection agency, but did not receive any response.

Dedicated to the conservation of hyacinth macaws since 1989, Guedes has reason for concern regarding the trafficking of the birds. Before the 1980s, more than 10,000 of the birds were believed to have been taken from the wild and sold on the black market, mostly overseas. This plundering and the clearing of the birds’ habitat for plantations, cattle pasture and urban areas, together with hunting for their feathers for handicrafts by Indigenous people, resulted in the species, originally found across all of Brazil, losing much of its population.

In 1987, it was estimated there were between 2,500 and 3,000 hyacinth macaws living wild in the Brazilian Pantanal and more in neighboring regions of Paraguay and Bolivia, as well as scattered populations in the Brazilian states of Pará, Maranhão, Bahia, Piauí, Tocantins, Goiás and Minas Gerais. By the start of the 1990s, the population in the Pantanal had plummeted to 1,500. To make the situation worse, these birds hatch in small numbers, meaning the natural population growth was being outstripped by the pace at which they were being poached from the wild.

Intensive conservation efforts in the Pantanal, still home to the largest hyacinth macaw population, have helped boost the bird’s numbers there to an estimated 6,500 wild individuals. But despite the increasing numbers, Guedes says the removal of the species from the threatened list was a “play on the part of the government” that surprised her.

“The Brazilian list was getting too long and they needed to reevaluate as to which species could be taken off, so they released the new list as good news that some species had been removed,” she says.

With the red list due for another update, Guedes says the hyacinth macaw should once again be listed. She points to a recent surge in deforestation, climate change and this year’s wildfires as having a profound impact on the birds, compounding the threat from trafficking.

A symbol of the Atlantic Rainforest

Like the hyacinth macaw, the golden lion tamarin almost went extinct in the past century. In the 1960s, the wild population was estimated at just 200 individuals. The destruction of the Atlantic Rainforest in the state of Rio de Janeiro and the export of the monkey for the pet trade and for zoos were identified as the main causes of their diminishing numbers.

Luis Paulo Ferraz is the executive secretary of the Associação Mico-Leão-Dourado, or Golden Lion Tamarin Conservation Association. He says international cooperation among conservationists and zoologists to release captive-bred tamarins into the wild beginning in 1984 was fundamental in reducing trafficking of the species. “Management of the species in captivity, including the sharing of animals between zoos, also helped reduce the prices of the animals and cut the trafficking business,” he says.

Following decades of intensive work, including releases and stricter monitoring, the illegal trade faded as a leading concern of conservationists working with golden lion tamarins. Today, the association’s focus is to rehabilitate the species’ habitat: there are an estimated 2,500 tamarins in the wild, and the goal is to increase its habitat to 25,000 hectares (62,000 acres) of protected and connected forests.

Ferraz says it’s still too soon to know what’s driving the current increase in trafficking of tamarins. “The recent cases worried us that the process could begin again, especially because of increased poverty and crime, economic crisis and weakened environmental and monitoring agencies. This administration’s policy has not contributed to the protection of natural resources,” he says.

Unlike in the past, when golden lion tamarins were mostly smuggled abroad, recent seizures indicate that the present trade is concentrated inside Brazil.

On July 25, 2017, the São Paulo State Environmental Military Police found 19 small primates, including two golden lion tamarins, at a home in the municipality of Embu das Artes. They arrested a woman and obtained a list of potential buyers and sellers, along with a microchip device and false financial receipts. Also in 2017, authorities found a pair of golden lion tamarins for sale at a pet shop in Maringá, in Paraná state. The species is included in the current national red list and is also on CITES Appendix I.

Trafficking and hunting on the Rio de Janeiro coast

Deforestation and encroachment by land grabbers in parts of Golden Lion Tamarin Municipal Nature Park in Cabo Frio municipality, Rio de Janeiro, has proved dangerous for the primates living there. According to City Hall, “four adult tamarins have been found dead in the last six months, all of them carrying signs of mistreatment, and one killed by a bullet. The animals were killed with the intention of eliminating controls on the area and thereby making it easier to subdivide and sell the land.”

In the midst of this conflict between the government and invaders, there have also been reports of tamarins being captured for trafficking. On Aug. 15 this year, city authorities were tipped off by an anonymous report that two animals were being held inside a house near the park, and that they would be taken for sale at the well-known market in the town of Duque de Caxias, one of the region’s most notorious wildlife trafficking hubs. City officials and Military Police officers went to the location and found the monkeys. One died during the seizure. Authorities arrested two men and also seized 50 birds.

On Sept. 17, a raid on an illegal zoo in Cataringa municipality, Minas Gerais state, by the Public Prosecutor’s Office resulted in the seizure of 116 animals, including three golden lion tamarins. A fourth animal fled and was recovered in October.

The Federal Police say they have no investigations underway into trafficking of golden lion tamarins. IBAMA has not made a statement on the matter. The Rio de Janeiro Military Police says it has made no seizures of these animals in the past two years.

“It’s not a situation that proves there is a new wave of trafficking underway, but these different occurrences are concerning, especially with the current social, economic and political hardships currently going on in Brazil,” Ferraz says. “They aren’t isolated incidents.”

This article by Dimas Marques/Fauna News was first published on Mongabay.com on 11 December 2020. Lead image by Andreia Martins/AMLD.

Traffickers and poachers should be poached into extinction