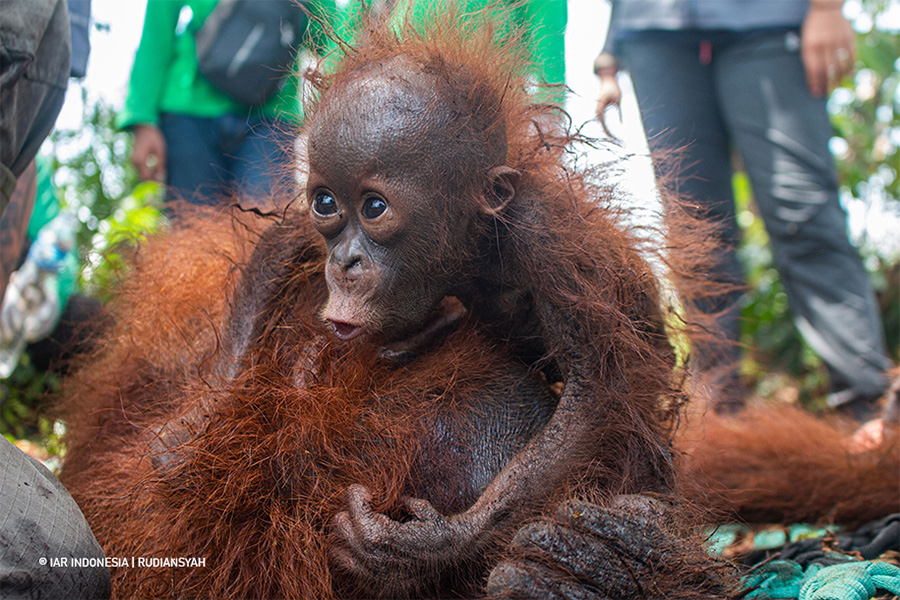 PONTIANAK, Indonesia — As the forests of Indonesian Borneo burned during fires last year, a female orangutan was forced to leave her burning home. When she was rescued from a small farm, experts found signs of recent pregnancy and wounds on her body.

The orangutan, later named Epen by her rescuers, was found foraging at a farm by locals in late November 2019 in Ketapang district, West Kalimantan, a province in Indonesian Borneo. Official figures show the district recorded thehighest number of hotspots, indicating forest fires, in 2019. Bornean orangutans (Pongo pygmaeus) were among the wildlife that wound up in small farms as they fled the burning forests — set ablaze mostly to clear the land for large plantations.

When she was captured, Epen appeared to be lactating, which led experts to believe she might have recently given birth. If there was a baby, however, they never found it.

Veterinarians also retrieved air gun pellets from Epen’s back and legs. After spending months in animal rehabilitation, Epen was released back into a protected forest in Ketapang earlier this year.

Epen is one of the many orangutans that experts from the NGO International Animal Rescue (IAR) Indonesia and local conservation authorities had to capture and relocate to another habitat.

The wildlife group noted an increase in reported cases of human-orangutan conflict between September and December 2019, a trend consistent with the rise in wildfires across the province that had started a month earlier.

“The natural habitat is gone because of forest fires, while it’s damaged because of land-use change for plantation, mining, and agriculture,” said Karmele L. Sanchez, the director of IAR Indonesia.

Habitat loss and poaching have driven the Bornean orangutan to the brink of extinction. In Indonesian Borneo, nearly 80% of the remaining population of this great ape survives outside conservation areas, often in small groups separated from each other in increasingly fragmented patches of forest. Local farmers consider them pests for raiding their crops, and often shoot and kill those that they encounter.

“We hope people realize that when there’s no forest, it’s not only orangutans that suffer, but humans also” Karmele said. “Having a home that’s safe from disruptions and has enough food supply is a solution to reduce human-orangutan conflict.”

Authorities and experts have urged locals to report to officials when they encounter an orangutan, to reduce potential harm toward both animal and human. Rescued orangutans are assessed by wildlife experts and veterinarians before they are released back into a new habitat.

Ketapang has a number of protected forests that experts say are suitable new homes for the orangutans. These forests have plenty of food sources and a low enough orangutan population density is not too high.

Translocating orangutans to a more protected habitat gives them a second chance at life, experts say. Conservationists at IAR Indonesia say they hope for an end to the annual forest fires, so that the orangutans never have to leave their homes and be rescued in the first place.

“Translocation is just a temporary solution, [but] it won’t resolve the core issue,” said Argitoe Ranting, a field manager at IAR Indonesia. “The real problem is with land-use change and forest degradation.”