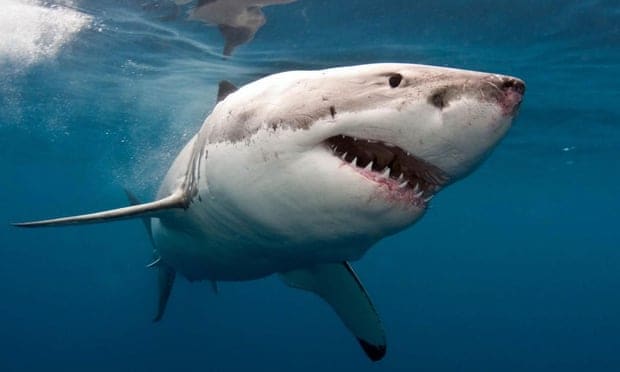 Surfers at a beach in Sonoma county, California, used a surfboard strap as a tourniquet to save a man whose right leg was bitten by a great white shark.

Eric Steinley was attacked as he surfed about 50 yards from shore at Salmon Creek beach last Sunday, but managed to alert others in the water.

The 38-year-old said he managed to punch the shark in the face to force it to release him, then was helped ashore by a stranger who used his board strap to tie the tourniquet.

Other surfers added a second tourniquet before using a longboard as a stretcher and taking Steinley to a helicopter pick-up point. He was flown to Santa Rosa Memorial hospital, where doctors performed two surgeries to save his leg.

Unprovoked shark attacks remain rare. In January, Florida University’s International Shark Attack file reported that 2020 was the deadliest year worldwide since 2013, with 10 fatalities from unprovoked incidents. But the number of attacks overall had fallen.

The university has recorded five fatalities through great white shark attacks in California since the start of the century, the most recent a 26-year-old surfer near Santa Cruz in May 2020.

According to a recent study, more than a third of all shark and ray species now face extinction, thanks to drastic overfishing.

Steinley described the attack from hospital, in an interview with the Santa Rosa Press Democrat.

“The feeling was very heavy, like swimming with a bag of bricks on you,” he said of the moment when the shark bit his leg and pulled him under.

“I was in a lot of pain and still thinking, you know, ‘I’m either going to lose my leg or I’m gonna die,’” Steinley told ABC. “It was like a clamp right around my leg. And we went underwater together in slow motion.”

He said he punched the shark’s face when he realized it was a great white, and was surprised when it relaxed its jaws, letting him swim free.

“It was a measly punch compared to how big this creature was,” he said.

The nearby surfer, Jared Davis, said he spotted the shark’s tail fin and Steinley disappearing under water and tried to help.

Doctors told Steinley the shark severed a nerve and he might not recover full use of his leg.

“I still want to be part of the [surfing] lifestyle,” Steinley said. “I’m just so thankful, still in disbelief that I’m alive because of it.”

This article by Richard Luscombe was first published by The Guardian on 11 October 2021. Lead Image: A great white shark. ‘It was a measly punch compared to how big this creature was,’ said Steinley. Photograph: ScreenWest/PR IMAGE.