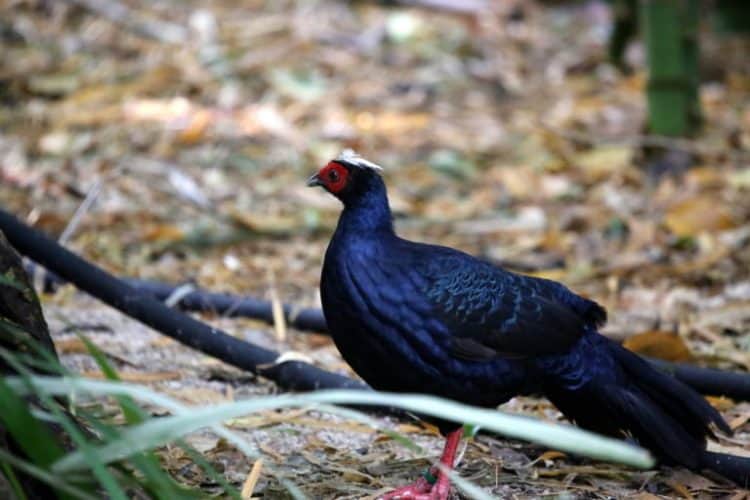 HO CHI MINH CITY — Camera traps placed in a remote nature reserve in central Vietnam recently captured images of rare muntjac deer, in addition to a number of other endangered species, raising hopes for the state of biodiversity there.

The sightings took place in Phong Dien Nature Reserve in Thua Thien-Hue province, a rugged part of the Truong Son Mountains (known internationally as the Annamites) near Vietnam’s border with Laos.

Local media reported that 110 cameras had been placed by the reserve’s management board and staff from the conservation NGO Viet Nature in an effort to capture the extremely rare Edwards’s pheasant (Lophura edwardsi).

While the precise muntjac species has not been officially announced yet, experts at the Saola Foundation for Annamite Mountains Conservation say they could be the Roosevelt’s muntjac (Muntiacus rooseveltorum).

Whatever the species, the fact that they were spotted on camera at all is promising.

“Camera traps are actually a very inefficient way of detecting species that are at very low densities,” said Lorrain Scotson, CEO ex officio of the Saola Foundation. “You set up a camera on a tree and you have to rely not only on the animal walking past, but on the batteries not dying, the camera not being flooded, the picture not being blurry; there are so many ways a camera trap can fail, and only one way it can succeed. So if an animal is being detected on a camera trap, it’s the tip of the iceberg — it means that the population is at a high enough density to be captured, so it’s very encouraging.”

Viet Nature could not be reached for comment prior to publication.

The sightings of the muntjacs and other wildlife further emphasize the importance of this nature reserve to biodiversity in central Vietnam and neighboring parts of Laos.

“Phong Dien remains a priority area for investment in the Central Annamites landscape since it still maintains populations of a range of endemic and threatened species, as well as being important for landscape forest connectivity,” said Ben Rawson, conservation and program development director at WWF-Vietnam. “In intensive camera trapping conducted in 2018, several species which were not detected from other sites were detected in Phong Dien, suggesting that additional investment in the site would be valuable, the vagaries of detection notwithstanding.”

The reserve was initially created in response to the 1996 rediscovery of the Edwards’s pheasant, which had been considered possibly extinct up to that point. However, no further live specimens have been seen since then, and the only more recent record was a 2018 photo of a dead female Edwards’s pheasant in A Luoi district, which includes part of the reserve.

Overall, 38 mammal species, 204 bird species, 35 reptile and amphibian species, and 755 plant species have been described in the reserve, many of which face a high risk of extinction, according to USAID. The Owston’s civet and Annamite striped rabbit are only found in these mountains, and their presence gives added significance to Phong Dien.

Given the lack of confirmed reports of Edwards’s pheasants since 1996, the species is not included in this list.

As with any protected area in Vietnam, persistent threats remain both to forest health and biodiversity.

“Wildlife surveys conducted by WWF in 2018 showed that hunting using snares was still a major threat, as it is in most protected areas in the region,” Rawson said. “This threat has resulted in depleted populations of terrestrial wildlife that is susceptible to this kind of hunting.”

Habitat fragmentation is a concern as well, especially in river valleys, he added.

USAID notes that hydropower development, which is common in Vietnam’s mountainous regions, is a sustained threat to conservation as well: “Clearance of habitats, infrastructure development and hunting and wildlife consumption conducted by construction teams all contribute to impact the site’s values.”

The camera trap sightings are likely to spur increased attention from conservation groups and Phong Dien’s management team in an effort to confirm the presence of these species and ensure their protection.

“I bring attention to the Annamites, which are really like the unknown Amazon rainforest of Southeast Asia,” she said. “Very few people have heard of it. So pictures are extremely useful for awareness-raising, and if someone sees an Annamite striped rabbit on the BBC, that will stick with them.”

This article by Michael Tatarski was first published on Mongabay.com on 24 June 2021. Lead Image: The critically endangered Edward’s pheasant is endemic to the tropical rainforests of Vietnam. Image by cuatrok77 via Flickr (CC BY-SA 2.0).