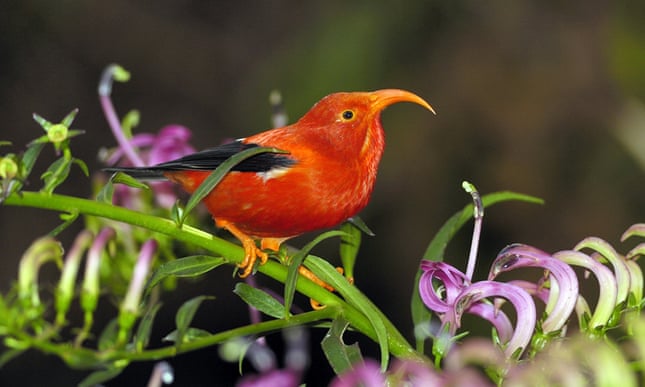 Before the first Polynesian settlers arrived roughly 1,500 years ago, the Hawaiian Islands were ruled from the sky. Not a single land-dwelling reptile or mammal called the archipelago home – just winged insects, one variety of bat, and a truly vast array of birds.

While Hawaii is still flush with life today, many of those birds are now gone – roughly 67% of all endemic Hawaiian birds have been wiped from existence since humans first arrived on the islands. Although habitat loss – and more recently, climate change – have played a role in that decline, one especially persistent threat to these native birds has been predatory invasive species, which were introduced – inadvertently or otherwise – to the islands by humans. For example: feral rats stowed away on canoes used by early Polynesian settlers.

To protect Hawaii’s native birds from these and other four-legged predators, conservationists at the Kīlauea Point national wildlife refuge on the island of Kauai are trying something new: building a sprawling wall around the birds’ nesting ground.

In 2014, the wildlife refuge unveiled a state-of-the-art, predator-proof fence; standing two meters tall and spanning 624 meters (2,050ft) across, it creates a physical barrier that blocks invasive predators from accessing nesting seabirds and their young. The fence is capped with a rolled hood to stop attempts of climbing over, and an underground extension of its base wards off predators who can burrow and dig. The fence – with its very fine mesh – can prevent anything “larger than a one-day-old mouse” from getting through, according to the US Fish and Wildlife Service.

In addition to non-native invasive species – like feral cats, dogs, rats and pigs – Hawaii’s rare native birds also face the looming threat of climate change, according to Jen Waipa, a local employee of the Fish and Wildlife Service. To that effect, the fence is also composed of marine-grade stainless steel to withstand natural disasters.

The fence – the second of its kind in Hawaii – was installed at the behest of the Nihoku ecosystem restoration project, which is dedicated to preserving the archipelago’s coastal ecosystems and establishing safe breeding grounds for Hawaiian seabirds.

While the barrier is designed to protect the seabirds from bodily harm, the wildlife refuge ultimately wants the birds to thrive – which necessitates a large number of ongoing side projects. One is habitat restoration – just as predatory mammals are catastrophic to Hawaii’s birds, invasive plants have crowded the islands, choking out native flora that can be used as a food source for Kauai’s birds. Each year, the Nihoku project transforms one acre of the wilderness refuge, uprooting all introduced vegetation and replacing it with native species. Volunteers also build artificial burrows, which provide the birds with reliable shelter.

The Nihoku project is also working to attract animals to Kīlauea Point. Seabird calls are broadcast from a large speaker to attract the attention of adult birds, while volunteers search for hatchlings.

The gradual loss of biodiversity across Hawaii has painted a bleak picture, but Kīlauea Point serves as a beacon of hope for the archipelago’s future.

“We have six protected seabird species that are believed to breed annually, including one threatened species. In addition, we have the largest breeding population, approximately 160 pairs, of threatened nēnē [an endemic goose] in the state,” states Waipa. “Although breeding is unconfirmed, several breeding behaviors have [also] been documented for black-footed albatross, great frigate bird, Bulwer’s petrel, Kermadec petrel, and the endangered Hawaiian petrel.”

In the coming years, the Fish and Wildlife Service aims to double the number of breeding species at Kīlauea Point; the service highlights the success of Hawaii’s Lehua Island in the north-west as cause for optimism.

And while many of the unique species that once called Hawaii home are now extinct, Kīlauea Point serves as another source of hope. Human settlers and colonizers may have started some of the troubles facing the islands’ endemic birds – but careful conservation and creative thinking could now help protect what’s left of them for future generations.

This article was first published by The Guardian on 28 August 2020. Lead Image: The Hawaiian honeycreeper. Roughly two-thirds of endemic Hawaiian birds have been wiped out since humans arrived in the islands roughly 1,500 years ago. Photograph: Jim Denny/AP.