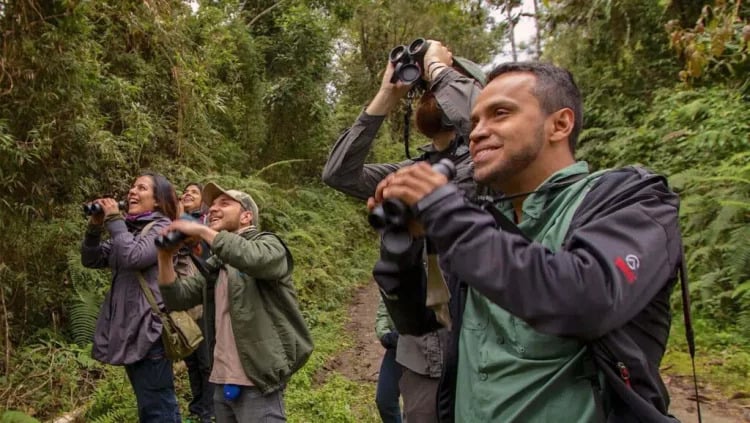 We all know that spending time in nature is enjoyable, but now there’s increasing evidence that wildlife – and birds in particular – have a profound positive impact on our mental wellbeing. We delve into the latest discoveries from the fields of biology, economics and psychology.

Over the past 18 months, everyone I know turned to nature in some way to cope with the pandemic. My friend went to the lake every day to feed the geese. My parents put up a bird feeders in the garden and watched the avian antics from inside the house. I liked to go and see the kestrels soaring overhead at my local nature reserve. Through the various worries, tragedies and restrictions that we endured, nature provided us with much-needed solace and diversion.

Birding is undoubtedly a pleasant experience – joyful, picturesque, some might even say restorative – but as anyone who has ever suffered anxiety or depression knows, pleasant things are not necessarily enough to alleviate long-term mood disorders. So can birds and nature really benefit our mental health?

There’s increasing scientific evidence that they can – especially for people living in built-up areas. A 2017 study published in BioScience measured different nature characteristics in urban neighbourhoods, and found that vegetation cover and afternoon bird abundance were positively associated with a lower prevalence of depression, anxiety, and stress. The findings were so clear that researchers could actually put a number on the minimum amount of vegetation cover needed to reduce each mental health issue: 20% for depression, 30% for anxiety, and 20% for stress.

Zooming in on birds, a 2020 study published in Ecological Economics put a literal price on bird biodiversity. The study used information from the 2012 European Quality of Life Survey to compare the satisfaction levels of more than 26,000 adults with the diversity of birds found around their homes, towns and cities. The results showed a clear correlation between happiness and the number of bird species. In fact, birds were found to be just as important for human wellbeing as financial security. According to their calculations, being near 14 additional bird species provided as much satisfaction as earning an extra $150 a month.

There’s no way of knowing whether it was the birds themselves that caused this phenomenal effect, or just their species richness, which tends to be higher around natural features such as forests, rivers and lakes. However, there are numerous arguments in birds’ favour. Birds are some of the most visible (and audible) members of the animal world, and are much more likely to make their presence known to us in our everyday lives, reminding us that there’s more to life than urban drudgery.

There’s even evidence that birdsong can boost our attention span and helps us recover from stress. A 2013 study published in the Journal of Environmental Psychology interviewed twenty participants and found that birdsong was the type of natural sound they most often associated with stress recovery and attention restoration. Interviewees recounted that birdsong reminded them of relaxing natural landscapes as a whole, and was also pleasant and melodious to listen to in itself.

It may seem strange to present the beauty and inspiration of nature in such a scientific – some might say soulless – way. How can you put a price on the swoosh of turtle-dove’s wing, or write a prescription for a dose of dawn chorus? But the truth is that such statistics are more important now than ever. The United Nations estimates that 54% of the world’s population lives in urban areas, and that proportion is rising all the time. More and more of us are living our lives separate from nature – but thanks to studies like these, planners have concrete evidence that green spaces really do matter.

Not only this, but the march of human development is gathering pace, in the face of environmental collapse. Showing governments and businesses that prioritising the environment has measurable economic and health benefits will help them make decisions that could save the planet.

On a more individual note, it’s also a reminder to ourselves that being around nature isn’t a frivolous pastime or unimportant hobby. It’s something that could vastly improve our health and wellbeing. So take that hike you were planning, visit your local nature reserve, or even just go on a lunchtime walk in your nearby park. If you need an excuse, 8-10 October this year is Global Bird Weekend, where birders across the world will be venturing out to record every bird they see in their area. Join us in observing the wonders of the migration season, in the knowledge that it’ll do you the world of good.