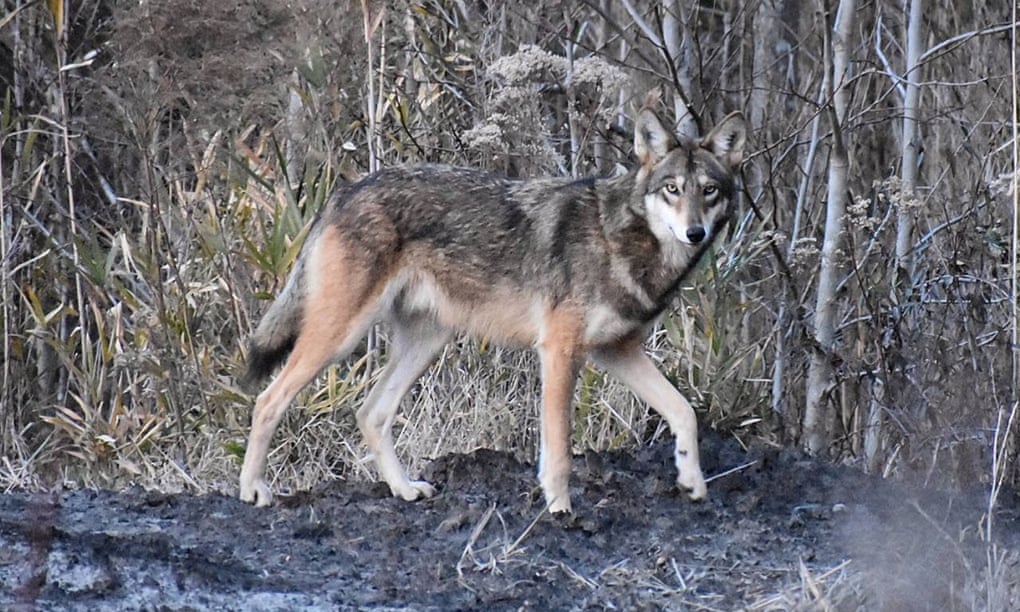 There are perhaps no more than 10 red wolves left in the wild, and they are all in just one place: North Carolina.

It is an astonishing statistic for a species once hailed as undergoing the most successful reintroduction programme in the US, providing the blueprint for Yellowstone national park’s much-lauded grey wolf rewilding project.

“The [red wolf] programme has almost entirely crumbled since I’ve been working here,” says Heather Clarkson, who works with the environmental charity Defenders of Wildlife. “It took about 20 years to get the programme to a strong place, that’s the really sad part. Because now it’s crashed. Disappointed barely scratches the surface.”

In January, following legal action by conservation groups including Defenders of Wildlife, the district court for the eastern district of North Carolina ruled that the US Fish and Wildlife Service (USFWS), which had cancelled the red wolf reintroduction programme, must resume the release of wolves into the wild. This month the USFWS presented a new plan to the judge and he has given the groups that launched the lawsuit two weeks to lodge any objections.

Start of the rewilding scheme

The plan to boost the number of red wolves in the wild began in 1973, when the USFWS set out to capture as many of the remaining wolves as possible to establish a captive-breeding programme.

In 1980, the red wolf was declared extinct in the wild. Seven years later the first reintroduction was made at the 60,000-hectare (152,000-acre) Alligator River national wildlife refuge in North Carolina. A breeding pair was released, and captive-bred pups were later fostered by the pack.

At its peak, in 2011, there were as many as 130 red wolves back roaming the marshes, swamps and coastal prairies. Their recovery was the first time in the US that a large carnivore had been declared extinct in the wild and then successfully reintroduced.

But by the time Clarkson started work on the project in 2016, they were already looking at “some pretty terrible numbers”. There were fewer than 60 left in the wild.

“I remember being a small child in elementary school and learning about the red wolf, and learning that we are the only place in the whole world that has these wolves,” says Clarkson, who was born in North Carolina. “Fast forward 20-odd years and I’m applying for a job that’s a last-ditch effort to save the species. It’s surreal. And heartbreaking.”

Although there has been debate about whether they are a separate species, a sub-species or a hybrid, most scientists now regard the red wolf as a distinct species. They are smaller than their grey counterparts, closer in size to coyotes and primarily prey on smaller mammals such as racoons, rodents and rabbits. They are the world’s most endangered wolf species, although until the early 1900s they were common throughout the eastern and south central US, ranging from New York state to Louisiana and as far west as parts of Texas.

They have suffered from the degradation of their habitat due to increasing urban development – which fragmented their breeding and hunting grounds – and hybridisation with coyotes. But the biggest threat today is conflict with landowners, which has led to them being hunted and shot.

Despite the species being safeguarded under the Endangered Species Act, it is not illegal to kill a wolf if the animal is attacking you, your livestock or your pets. Under the act, red wolves can be killed when a “take” is authorised by the USFWS, and after efforts by the agency to capture the animal have been abandoned. Over the years, the USFWS has issued a number of lethal take permits to landowners.

Tim Gestwicki is chief executive of the North Carolina Wildlife Federation, a conservation charity that promotes coexistence between landowners and wildlife. The NCWF introduced Prey for the Pack, a programme to support red wolves on private land, and has signed several contracts with landowners who wish to help the species recover.

“The whole issue goes back to the ability of private landowners to manage their property,” Gestwicki says. “And that means one thing only: coyote management. The ability to shoot coyotes is what landowners want, but they’ve been banned from doing so because they’re difficult to tell apart from wolves.”

Coyotes are “everywhere”, says Gestwicki, who believes there is a future for the red wolf “as long as private landowner concerns are met”.

Although the permission to kill a “problem wolf” was a factor in their decline, more critical was that in 2015 the USFWS declared it would no longer release wolves into the wild or continue its sterilisation of coyotes to protect the red wolf genome. Following the decision, the population plummeted. In 2019 and 2020, for the first time in 31 years, no red wolf pups were born in the wild.

“To go six years without releasing more wolves,” says Clarkson, “means losing even two wolves in a year is devastating. The USFWS has stopped the most basic forms of management.”

Conservation groups eventually took the USFWS to court. “The agency’s bar on captive releases would effectively doom the red wolf to extinction in the wild,” says Sierra Weaver, a lawyer for the Southern Environmental Law Center (SELC). The SELC, along with Defenders of Wildlife and the Animal Welfare Institute, sued the federal agency last November, alleging its new policies of stopping coyote sterilisation and ending the release of captive wolf pups into the wild – which appeared to run counter to red wolf conservation – were illegal.

In its ruling on 22 January, the district court said the USFWS must resume the release of wolves into the wild as well as the coyote sterilisation programme and submit a plan to reinstate the programme.

The court found it was “likely” that the USFWS had violated the Endangered Species Act, and banned the agency from issuing any more permits to kill wolves. The court added that the failure to release additional wolves “will all but certainly result in the extinction of the red wolf”.

The USFWS has since released its plan, saying that it is resuming the release of red wolves into the wild. Conservation groups will now consider the details of the plan before making their response.

The decision is welcome news to North Carolina zoo. The number of red wolves in captivity is increasing, with more pups born every spring. Until 2015, the USFWS had released captive-born wolf pups, pairing them up with wild foster families, and the technique had proved a success.

“I was disappointed when the USFWS stopped the pup fostering programme but understand the reasoning behind the decision. At the time there was a review of the entire recovery programme,” says Chris Lasher, animal management supervisor at the zoo.

North Carolina zoo got its first red wolf in 1995. It was the first facility to foster pups born under human care in a wild den, and has bred 40 pups, two of which were sent to the now-closed recovery location at Great Smoky Mountains national park. Of the 247 red wolves in captivity in the US, North Carolina zoo has 25, making it the second-largest breeding facility for red wolves in the world.

“By adding pups of around two weeks old to a wild litter, we are able to increase the genetic health of the wild population in a manner that has the least amount of mortality possible,” says Lasher. “We have had 100% acceptance of the fostered pups by the wild mother wolf.”

Clarkson remains hopeful that the red wolf can be saved and even thrive. “The Endangered Species Act is a legal obligation,” she says. “This is what USFWS is here for. There are dedicated people in USFWS, so I’m hopeful.”

This article was first published by The Guardian on 10 March 2021. Lead Image: A red wolf at Alligator River national wildlife refuge. In 1980 they were declared extinct in the wild. Photograph: Robert Orndrish/USFWS.