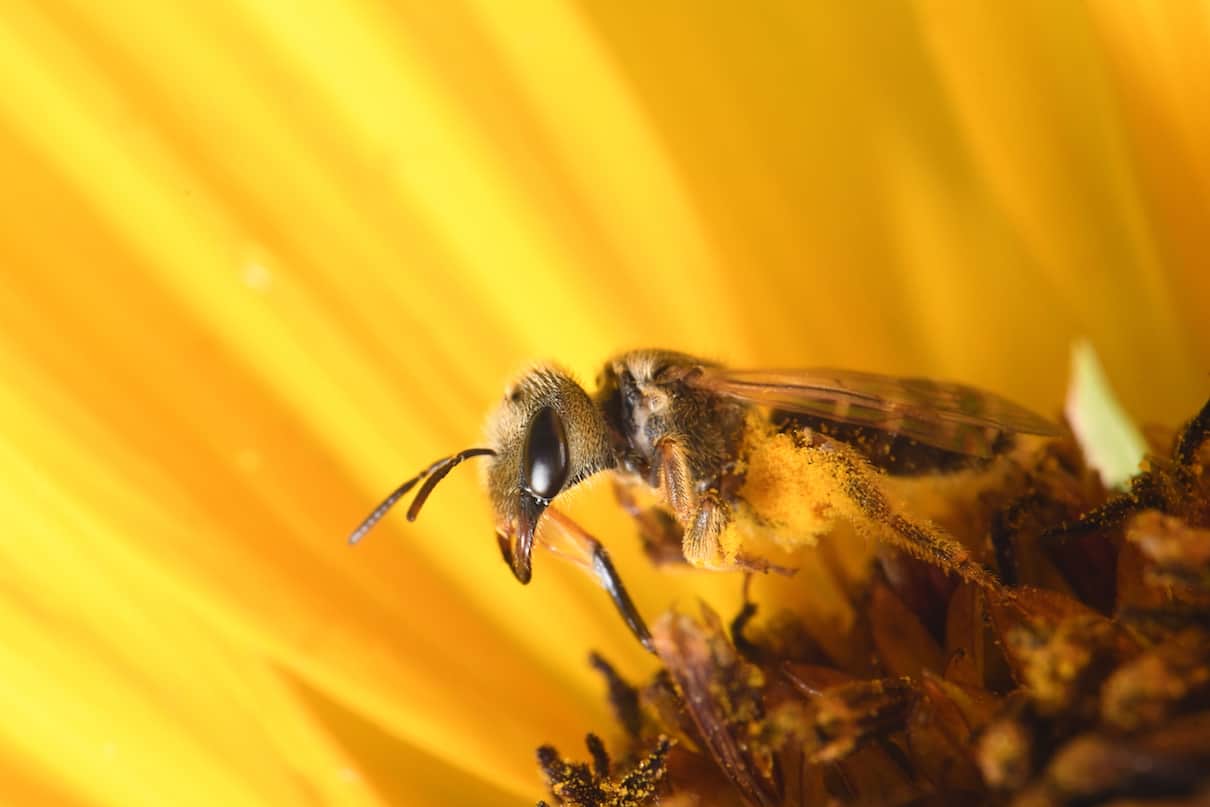 My name is Krystle Hickman. I’m a photographer, community scientist and public speaker based in Los Angeles, California. My photography revolves around three things: bees, the plants they visit and their ecosystems. As a community scientist I note behavior, times, dates and weather when out photographing bees and their flowers. Over many years, my notations have made it easy to notice changes in the ecosystems that involve bees and flowers.

As a result of my time and experience, I am disheartened when I see famous people, including Angelina Jolie, expounding the virtues of honey bees in magazines and on social media. While her heart may be in the right place, and while her activism and humanitarian efforts in other places have helped many people, she is misinformed when it comes to pollinators and what they need. Putting the focus on domestic honey bees shifts the spotlight away from native pollinators and contributes to the massive amounts of misinformation surrounding these imperiled creatures.

I too have fallen victim to misinformation about bees. It was a quote, posted on Facebook, attributed to Albert Einstein, that started my crusade to save the bees. “If the bee disappears from the surface of the Earth, man would have no more than four years left to live.” I was stunned: how could a creature we so commonly see, that is so important to the environment and human survival be going extinct? Countless people in the comments were talking about beekeeping, saving dandelions and doing their part. It was so inspiring! I spent hours watching beekeeping documentaries, reading online posts from beekeepers and I decided to get involved through my budding hobby as a macro photographer.

Beekeepers were more than happy to let me photograph their hives and tell me about the art of beekeeping. As I worked to get as many colorful photos of them as possible, I noticed that honey bees seemed to visit everything blooming. After about a year of photographing honey bees and building up my portfolio I visited a wildlife reserve to test out a new camera. On that day I photographed something new; bee-like, but not honey bee-like. I was surprised to find that my beekeeper friends didn’t know what kind of bee it was. After some digging, I stumbled across a native bee group on Facebook. “What on Earth are native bees?” I asked myself. Also, why was one of their requirements to join, “No posts about honey bees?” Well… weird but okay, “Request to Join.”

I soon learned that this was a group run by entomologists and melittologists; people who study insects and native bees, respectively. Very quickly the bee I found was identified as a native mining bee; called an Andrena. I learned that there are over one hundred species of Andrena in North America, that come in a rainbow of colors and visit early spring flowers when temperatures are often too cold for honey bees. I learned, too, that there are around 4,000 different kinds of native bees in the U.S. And native, meaning they had evolved in this country, where they are adapted to the special habitats and the unique flowers that occur therein. Through this group I also learned that honey bees aren’t native. I learned that the honey bees I had been so eager to ‘save’ didn’t need saving, but that many of North America’s unpretentious and unassuming native pollinators do.

How could I have wasted so much time on a false cause? I was horrified to think of all the times I had repeated and spread misinformation about honey bees, completely unaware of the real issue. This realization led to me completely reevaluate everything I had done.

Deciding to start over, I went out to photograph native bees. But for months I made attempts and failed. I had absolutely no idea why. I visited the same urban gardens I had photographed before, but these native bees remained elusive.

Everything changed when John Latsko, horticulturalist of The Crescent Farm, posted a picture on The Los Angeles County Arboretum’s Facebook page. His picture featured multiple native bees he saw that day. Visiting Crescent Farms for myself, I found five species in one afternoon. Here, in the heart of LA, I found jewel-colored sweat bees, fluffy bees with eyes as blue as Angeline Jolie’s, thin-waisted beauties with jawlines sharp enough to make models envious, and bees so unabashedly colored they would fit in at the Met Gala.

These bees energetically flitted from flower to flower drinking nectar and collecting pollen. The reason as to why so many native bees were present became very obvious. The Crescent Farm is a one-acre garden full of native plants. Native plants attract native bees. The urban gardens I had previously visited were full of non-native plants, many of which are invasive species. If you want to find native bees, look for native plants. Eventually partnering with the garden, I’ve photographed thirty-six species of native bees there.

Native plants also thrive in the habitats to which they are adapted, which includes the native bees that have co-evolved with them. Together, native bees and their native plants form a beautiful web of interactions, each benefitting from the presence of a community of the others. A community that includes butterflies, moths, bats, flies and so much more. What’s more, it is a community that has been

interwoven over thousands or even millions of years, as plants and their pollinators adjust to the same changes in climate and habitat. As an example, consider Perdita minima, the smallest bee in North America, no bigger than a freckle, and the exclusive visitor of the minuscule flowers of leafy spurge in the hot deserts of the southwest. Save the native bees, therefore, also means save the native plants.

In contrast, honey bees were imported to the U.S. from Europe. Through their own hard work, and easy relationship with humans, they have made their way around the world, providing wax and sweet honey wherever they are taken. Just as cows, chickens, pigs and sheep were brought by early colonizers, so too were honey bees. Time would be better spent devoted to native bees, as we do for native birds. There are no long-term relationships between European honey bees and native plants. Their population doesn’t decline with the decline of native plants, like native bees. Which means “saving” the honey bees does not lead to saving the native plants or ultimately native ecosystems.

In native ecosystems, when floral resources are scarce, honey bees outcompete native bees for resources. They disrupt natural ecological connections between native bees and native flowers. As if that weren’t enough, like bikers at an unmasked Sturgis rally, they take viruses from their densely populated hives to all the flowers in the vicinity, where native bees then contract new diseases. It is very likely that honey bees are negatively impacting our native bee populations in permanent ways.

You may be thinking honey bees are still beneficial to us because they’re used in farming. What about the environmental impact large farming has on ecosystems? Large scale farming destabilizes and destroys ecosystems; not just through toxins and massive waste. In 2020 The Sacramento County Superior Court ruled in the favor of almond farmers that California lacks the authority to list bees as endangered species. There are currently four endangered bumble bees and many other threatened native bees in California. Elaine Trevino, president and CEO of the Almond Alliance of California, one of the plaintiffs said, “If these bees were listed as endangered, it would be devastating for the industry I represent.” Farmers in the Almond Alliance of California use honey bees for pollination.

Is it possible to farm alongside a native ecosystem without the use of honey bees? Yes. There are many smaller farms currently doing this and achieving seed and fruit set on par with that achieved by honey bees. Bee Friendly Farm, a five-acre farm in Willow Creek, CA, is a great example. This farm grows pears, apples, nectarines, peaches, strawberries, melons, cucumbers, zucchini, squash and so much more.

They farm alongside the native landscape which allows pollination of their crops to happen naturally. So far, they’ve observed over 30 native bee genera, and even more species, on the farm.

Can we save the bees? Absolutely. But we must begin with the important question: ‘which bees need saving’? To many people “Save the Bees” equals “Save the Honey Bees.” The wording needs to change. For comparison’s sake, saying we need to save the bees, meaning honey bees, is like saying we need to save birds from extinction and the first bird we start with is a chicken. There are many birds that need saving from extinction, but not the chicken.

With all of that said, where did this quote come from? “If the bee disappears from the surface of the Earth, man would have no more than four years left to live.” There is no record of Einstein ever having said this. Doing a quick Google search, you’ll find that that this quote first appeared in the 1990s. Which was quite a while after Einstein had passed away.

We need to recognize that honey bees do not need saving. Let’s educate ourselves about the beautiful bees that live around us. Applaud the famous person who decides to take up native bees as their cause on social media. Take time to preserve native ecosystems and save a space for native plants in our yards, free of pesticides and herbicides. Recognize the value of using our own back yards to support diverse pollinators. Understand that just as individual bee species are important, so are our individual decisions. If we don’t act as responsible individuals to make a change now, the opportunity to change later may never come.

This article by Krystle Hickman was first published by Mongabay.com on 7 October 2021. Krystle Hickman is an artist, photographer, community scientist and public speaker based in Los Angeles. Lead Image: Female Halictus ligatus or ‘sweat bee’ on a dwarf sunflower. Image courtesy of Krystle Hickman.