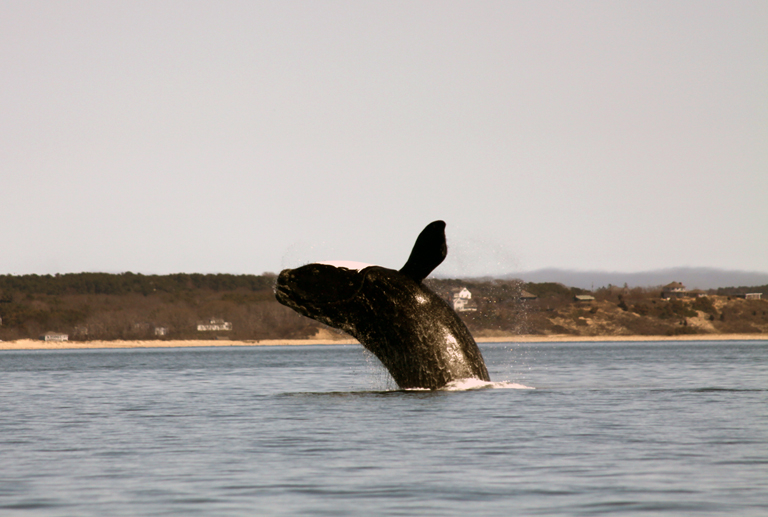 Scientists say that behavioral changes observed in North Atlantic right whales should be considered a “canary in the coal mine” scenario.

A team of researchers with the Center for Conservation Bioacoustics at the Cornell Lab of Ornithology and Syracuse University recently published the results of a six-year study that focused on the North Atlantic right whales (Eubalaena glacialis) in Massachusetts Bay, which, together with Cape Cod Bay, comprises one of seven areas in the Gulf of Maine that the whales use during seasonal congregations.

The study was conducted between July 2007 and April 2013, which the researchers characterize in the study as “a time of both rapid ocean warming throughout the Gulf of Maine and apparent changes in right whale migratory dynamics.” The team used an automated detection algorithm to determine the presence of right whale “up‐calls” in 47,000 hours of recordings made with 19 bioacoustic recording devices deployed across 4,000 square kilometers (about 1,544 square miles) of Massachusetts Bay.

In each year of the study, the researchers found the number of up-calls peaked in late winter and early spring as expected, since that is when the whales congregate to feed in Cape Cod Bay, and the whales must pass through Massachusetts Bay to get there. In fact, the number of whales present during this peak season increased every year of the study except for 2009-2010, “when acoustic presence was unusually low,” according to the study. But the researchers also detected an increased presence of right whales during parts of what should be their off‐season, from late summer to early fall.

“The mean percent of hours in which up‐calls were detected increased every year, both during the peak season (from 38% in 2008 to 70% in 2012), and during the summer–fall season (from 2% in 2007 to 13% in 2012),” the researchers write in the study. The increased use of Massachusetts Bay likely reflects “broadscale changes in habitat use in other areas within the species range,” the researchers add, hence the “canary in the coal mine” comparison.

“The change in right whale presence in Massachusetts Bay over the six years of the study is striking,” lead author Russ Charif, senior bioacoustician at the Center for Conservation Bioacoustics, said in a statement. “It’s likely linked to rapid changes in conditions along the Atlantic Coast, especially in the Gulf of Maine, which is warming faster than 99% of the rest of the world’s ocean surface.”

Right whales were found to be present in Massachusetts Bay year-round, to varying degrees, which could have serious implications for efforts to conserve the species.

The whales’ presence in Massachusetts Bay increased even as the species’ numbers continue to decline. Entanglement in fishing gear and being struck by ships are the biggest threats to the right whales, but the cumulative effects of changing water temperatures, ocean noise pollution, and other stressors are contributing to their decline. The North Atlantic right whale is listed as Endangered on the IUCN Red List. According to the latest estimates, there are only about 400 left.

“There are seasonal conservation measures that kick in based on our historical understanding of where and when right whales are most often congregating, including Massachusetts Bay,” study co-author Aaron Rice, principal ecologist at the Center for Conservation Bioacoustics, said in a statement. “But the old patterns have changed and whales are showing up in areas where there are no protections in place to reduce the likelihood of ship strikes or fishing-gear entanglements.”

Charif noted that more research is needed to determine how best to protect the endangered species. “Our study data end in 2013 and conditions may have changed even more since then,” he said. “We need to do more of these long-term studies if we’re to have any hope of understanding how right whale habitat is changing because of human activities and before it’s too late for the species to survive.”

This article by Mike Gaworecki was first published on Mongabay.com on 6 December 2019.