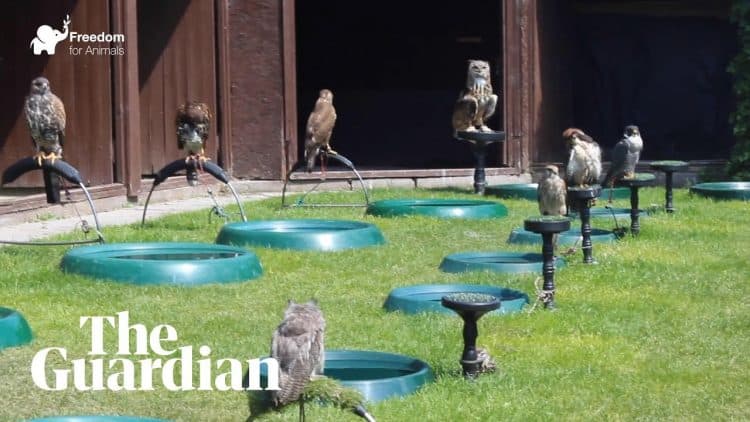 Zoos around the country are routinely only allowing birds of prey to fly for a few minutes a day and keeping them in cages smaller than their wingspans, an investigation has found.

A report by the anti-captivity charity Freedom for Animals, seen by the Guardian, details wild birds such as owls and falcons being tied to the ground on short leashes for long periods.

Government guidance on tethering applies only to owls and vultures. Some of the birds can be seen continually attempting to fly away before being pulled back down by their tether and chewing at their leg straps in footage recorded by animal welfare campaigners at bird of prey zoos.

The charity’s campaigns officer, Maddy Taylor, said: “Birds of prey used in falconry and held in zoos are still wild animals. They still have all their natural instincts and needs as those animals in the wild.

“This includes being able to perform natural behaviours, arguably the most fundamental to them being flight.

“Historically, there has been very little scrutiny of this industry and we feel that with the rising awareness around animal captivity, the time has come for this to be taken seriously.”

Freedom for Animals is calling for the government to review the industry and ban the “vastly cruel” practice of tethering for all birds of prey.

There are about 95 bird of prey zoos in the UK which house a minimum of 4,252 birds from 170 species. These include owls, falcons, vultures, buzzards and eagles.

Though birds were housed in aviaries, in three-quarters of all zoos they were also tethered – often on lawns where the public could view them.

Campaigners also witnessed owls being tied down at several zoos – despite government guidelines stating they should never be tethered. They claimed some birds were tied down for most of the day and night.

While most zoos offer some form of flying display, during the investigation birds were flown for an average of 11 minutes, meaning some were tied down for most of the day.

Emma Milne, a vet and author, said denying birds flight “and the chance to escape stressful situations and the choices that come with that is unacceptable on welfare grounds”.

She added: “Simply put, birds do not belong in cages and this practice should be stopped.”

Concerns were also raised by campaigners over “manning”, the common training practice of depriving birds of food until they respond to humans.

“The practices of tethering and manning are outdated traditions within the bird of prey industry, practices which we believe do not meet modern animal welfare standards,” said Taylor.

According to the report, a third of zoos also did not meet size standards for bird cages, with some birds living in such cramped conditions that they could not stretch out their wings.

Under government guidance on modern zoo practice, aviary sizes “must reflect the flying capabilities of the species” and birds should “enjoy relative freedom of movement”.

Local authority figures obtained under freedom of information requests by the charity revealed 40% of the zoos visited did not hold a licence and were therefore not subject to inspections from the Department for Environment, Food and Rural Affairs (Defra).

Of the zoos that did hold a licence under the Zoo Licensing Act 1981, an analysis of Defra inspection reports by the charity revealed several were overdue inspections.

Taylor said the lack of regulation meant birds were left vulnerable. “How then can the law be upheld and more importantly the animals protected? The same species of bird in different establishments are receiving vastly different levels of monitoring of their welfare,” she added.

Many aviaries were also found without clean drinking water, breaching animal welfare laws and guidelines. Guidance states that “every effort should be made” by zoos to ensure animals have access to water and are kept in a suitably hygienic environment.

An RSPCA spokesperson said: “Birds should have the opportunity to fly when they choose and they should always have access to water and shelter, both from the weather and the public.

“Birds of prey should not be handled by the public, a view which is supported by the Hawk Board, and zoo standards clearly state that no bird should be permanently tethered. Many zoos have free-flight aviaries for displaying birds, or are moving towards this method for housing birds of prey.”

A Defra spokesperson said: “All captive birds are protected by law. It’s an offence to cause unnecessary suffering to a bird of prey and all zoos must provide a suitable environment for them to live in.

“Where there is evidence that a bird of prey is being kept inappropriately in a zoo, it should be reported to the local authority which can investigate and, if necessary, initiate enforcement action.”

This article was first published by The Guardian on 28 June 2019.