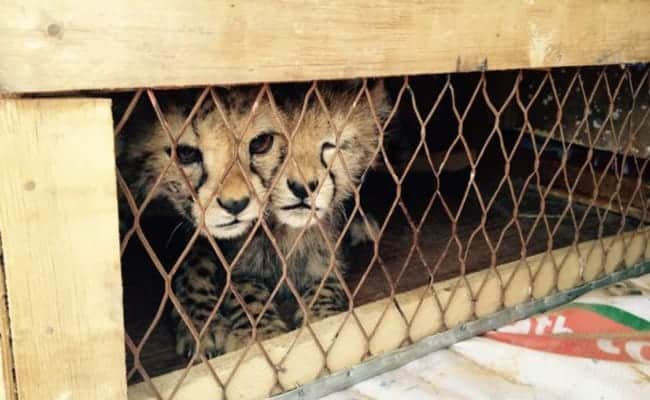 Conservationists are applauding officials for taking swift action to rescue 10 young cheetahs from the illegal wildlife trade, who would’ve otherwise been destined to end up as pets.

In all, 9 cubs and one adolescent were confiscated by the Somaliland Ministry of Environment and Rural Development (MoERD) with assistance from the Cheetah Conservation Fund (CCF).

The three youngest cubs were in worrying condition, and now CCF and its partner, the International Fund for Animal Welfare (IFAW), are working to provide them with the care they desperately need.

“CCF needed critical supplies if the cubs were to survive and IFAW was pleased to offer immediate assistance. Wild cheetah populations are in dire trouble, largely due to demand for cubs as exotic pets. The cruelty of live animal trade is shocking and we are doing all we can to save these cubs,” said Gail A’Brunzo, IFAW’s Wildlife Rescue Manager.

Unfortunately, cheetahs are seen as status symbols and even though the United Arab Emirates (UAE) banned keeping them as pets earlier this year, the illegal trade is still clearly a problem.

CCF reported that on the same day in a separate incident near the border of Ethiopia three older cheetahs escaped from a wildlife trafficker. Two of them were captured, but a search is still underway for the third.

According to IFAW and CCF, an estimated 300 cheetahs are smuggled to the Arabian Peninsula every year, and the trade isn’t just causing serious problems for individuals who are doomed to lives as pets, it’s threatening the survival of cheetahs in the wild.

In December, conservationists started pushing to have their status changed from Vulnerable to Endangered on the IUCN Red List of Threatened Species over concerns that despite being the fastest land animal on earth, they won’t be able to outrun extinction without more protection.

They’re believed to have lost 91 percent of their historic range, and continue to face threats ranging from more habitat loss and fragmentation and conflicts with humans to a loss of prey and being hit by vehicles. In addition to the demand for live cheetahs, the illegal trade is also being driven by the demand for their skin and parts.

“With a total population of just over 7,000 cheetahs remaining in the wild, the taking of even one cub is a threat to species’ survival. This is particularly concerning as trafficked cubs are usually removed from their mothers at very young ages ― less than 3 months ― which means that they have not had enough time to learn skills necessary to survive in the wild and will in most cases require life-long care,” said Dr. Laurie Marker, CCF’s Founder and Executive Director.

That will sadly be the case for these cubs, but their rescuers are working to secure the best possible outcome for them. Unfortunately, it’s going to take a lot of extra work because under current laws they can’t be transported across the border to sanctuaries in other countries. CCF and IFAW are now negotiating options for their long-term care.

Hopefully they will ultimately be able to live out their days in a sanctuary, but their case is a sad reminder about how the illegal wildlife trade and the demand for exotic pets is hurting cheetahs and other species.

For more on how to help, visit the International Fund for Animal Welfare and the Cheetah Conservation Fund.

This needs to stop