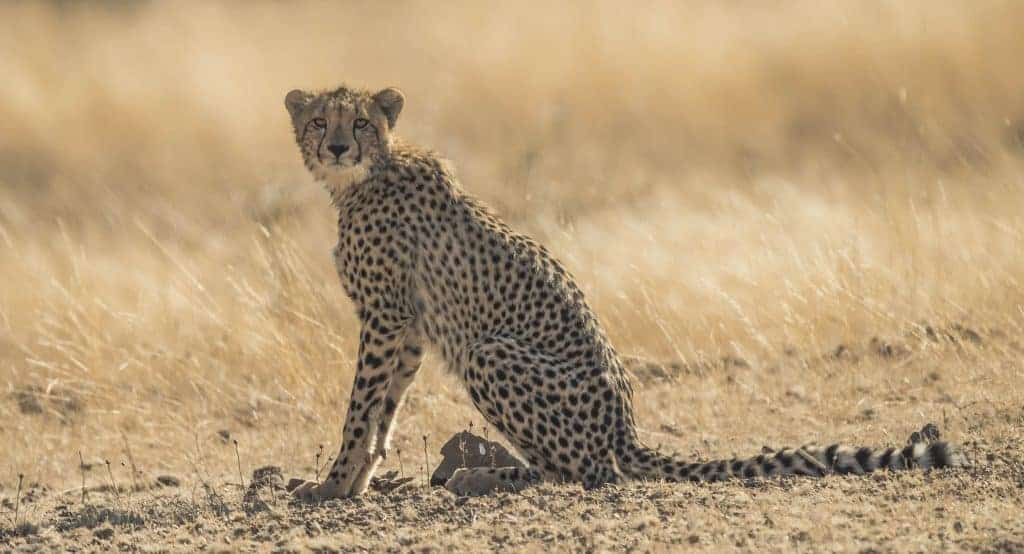 This is my second post from our trip to Mashatu in mid-August, where the cheetah seem to be thriving. There are now two cheetah females each with three cubs and a coalition of three adult males.

This is no mean achievement in an environment where there is powerful competition from lions, hyaenas and leopards.

Mashatu has numerous hills which the cheetahs use to look down on the plains for opportunities and threats.

These speedsters operate mainly in the day when larger predators such as lions and hyaenas are resting.

From the lookout under a Shepherd’s tree, three sub-adult cubs followed their mother towards a croton grove where the cheetah mum must have seen potential prey. The cubs followed from a distance and one cub paused, while following its mother, just to see what we were doing.

“The wise learn many things from their enemies.”

This cheetah family emerged from a croton grove and were smelling scats on the way out. The smells must have given them important information as this individual lingered sometime decoding the aromatic data.

These lightweight predators are furtive in their movement when they are uncertain. They are always looking around them to check that no threat will catch them unawares.

The female and her cubs were very wary as they backed away from the croton grove. Something triggered their caution. We could not see what it was. Perhaps the cheetah mother caught sight of a leopard or lion and backed out.

Cheetahs continually look behind themselves to make sure nothing is sneaking up behind them. They have the speed out outrun any threat if they just get enough warning of imminent danger.

In or out of the sun, a cheetah’s speed starts with aerodynamics. Its slender body, small head, flattened rib cage and long, thin legs minimise air resistance. Its lightweight frame (typically only weighs about 125 pounds or 57 kg), gives it a high power to weight ratio.

This young Cheetah was relaxing in the shade. The colour of the light cast on these cheetahs depended on the direction of the sun when in shade.

A mother and one of her sub-adult cubs lying in the shade facing different directions for security reasons. The youngster was not bored just tired.

A cheetah mother with two of her three youngsters. The third was further ahead, out of the frame. It is no mean feat to raise three young cheetahs in this tough predator-filled environment.By 18 months of age, the mother leaves the cubs. Then, they usually a form sibling group, staying together for another six months. At about two years, the female siblings leave the group and the young males remain together for life.

“When one tugs at a single thing in nature, he finds it attached to the rest of the world.”

The next image shows behaviour I have never seen before and would have never believed if I had not seen it for myself. A flock of guineafowl followed these cheetah making an almighty racket. They actually pursued them, making it clear to every living being around that there were predators in front of them.

The guineafowl must have followed this cheetah family for nearly half a kilometre before abandoning their mobbing. I have never seen guineafowl do this before. The more I get to see guineafowl the more complex I find their behaviour. It is clear that predators do not get it all their own way. Tree squirrels, Vervet monkeys, baboons, starlings and guineafowl are always ready to sound their alarm calls signalling the whereabouts of a predator.

These young cheetahs seemed to be spooked by many of the sounds around them. Presumably knowledge built on past experience. They became even more wary once the wind started to gust. The swirling air disturbed their senses making it difficult for them to locate the direction of sounds and scents.

When cheetahs rest there is always one on guard keeping 360 degree surveillance. When there is an unusual sound the others quickly sit up and take notice.

Photographs are normally taken of cheetahs side on but you do not get a sense of how lean and thin they actually are from a side view. It is incredible to think that this wild creature can accelerate to speed of 60 miles per hour in three seconds. Equally impressive is that they can twist and swerve at these speeds to catch their prey. The power to rapidly accelerate—not just speed alone—is the key to the cheetah’s hunting success, according to Alan Wilson, a professor of locomotive biomechanics at the Royal Veterinary College at the University of London.“Capturing prey seems to come down to maneuvering,” he said. “It’s all the zigzagging, ducking and diving.The way cheetahs pivot and turn while sprinting was amazing. A cheetah can bank at a 50-degree angle in a high-speed turn, while a motorcycle can do maybe 45 degrees” (Source: Seth BorensteinThe Associated Press).The cheetah’s long tail acts like a rudder during the high speed chase and works as a counterbalance enabling it to zig zag, making quick turns at amazing speeds.

The black tear marks from the eye to the mouth reduce reflection in bright sunlight and improve vision. This is necessary as these lightweight speedsters hunt in daylight hours when they have less competition from lions, leopards and hyaenas. Supposedly cheetahs’ night vision is no better than a humans but they do hunt at night when necessary.

“At some point in life, the world’s beauty becomes enough.”

A pensive youngster. A privilege to look at them but we have no idea of their context and what they have been through to survive to this point.

“In all things of nature there is something of the marvelous.”

This is typically how you will first see a cheetah in Mashatu. A family looking out from under the shade of a Shepherd’s tree.Solitary females are particularly vulnerable, with young to feed and defend. Males, on the other hand, are more sociable and often form coalitions of between two and five animals that stay together for life. The coalition gives them the power to defend typical territories of up to 160 square kilometres. Solitary females roam further.

It is not difficult to understand why these amazing, highly specialised predators thrive in Mashatu. There are big open spaces, plenty of small enough prey and enough room for them to use their competitive advantage, their incredible speed when hunting. In a chase, the number of breathing movements accelerates from 16 per minute to 156. But the cheetah cannot run more than about 800 metres or it may overheat. The cheetah cannot expel the accumulated heat rapidly enough and easily overheats.

Cheetahs are specialized hunters and do not have the braun to compete with other larger feline carnivores but they have worked out a way to thrive. Like other large carnivores, cheetahs face habitat loss driven by conversion of wilderness areas into managed land dedicated to agriculture or livestock and people who kill them as they see them as a threat to their livestock, even though cheetahs rarely kill domesticated animals.

“I see a world in the future in which we understand that all life is related to us and we treat that life with great humility and respect.”

Today there are just 7,100 cheetahs left in the wild, according to the new study reported in the Proceedings of the National Academy of Sciences. Their numbers have fallen from an estimated 14,000 cheetahs in 1975, when researchers made the last comprehensive count of the animals across the African continent. The cheetah has been driven out of 91 percent of its historic range.

These cats once roamed nearly all of Africa and much of Asia, but their population is now confined predominantly to six African countries: Angola, Namibia, Zimbabwe, Botswana, South Africa, and Mozambique. The species is already almost extinct in Asia, with fewer than 50 individuals remaining in one isolated pocket of Iran.

Based on these results, the study authors are calling for the cheetah’s status to be changed from “vulnerable” to “endangered” on the IUCN Red List. (Source: NationalGeographic.com).

“I am in competition with no one. I run my own race. I have no desire to play the game of being better than anyone, in my way, in any shape or form. I just aim to be better than before. That is me , I’m free.”

Explore, seek to understand, marvel at its inter-connectedness and let its be.