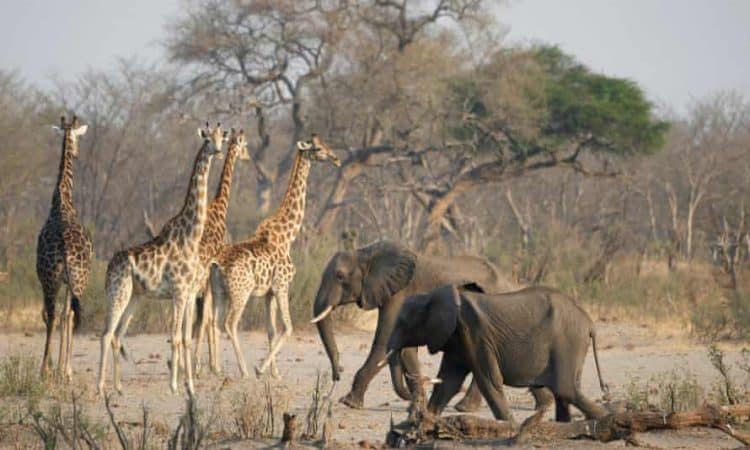 Zhongxin Coal Mining Group and Afrochine Smelting have received permission from the government to begin environmental impact assessments for drilling, land clearance, road building and geological surveys at two proposed sites inside the park, which is home to almost 10% of Africa’s remaining wild elephants.

If this leads to a new mine, conservationists warn it will shrink and disturb the habitat of many rare species including black rhino, pangolin and painted dogs, and devastate safari tourism, which is a vital source of income for local people.

Hwange, which is the size of Belgium, boasts the largest diversity of mammals among the world’s national parks.

“This is one of the greatest game parks in the world and the mines would be in one of the most pristine areas of the park. The last black rhino population in Hwange Park lives there, so do 10,000 elephants and 3,000 buffalo,” said Trevor Lane, who has worked for the Bhejane Trust in Hwange for more than a decade.

“If it goes ahead it will be an end to the park. It would kill the tourist industry which is worth hundreds of millions of dollars.”

He expressed hope that the project would be shelved but warned of protests if it moved forward. “I’m cautious at this early stage. Let’s see what the government says. But a lot of people are ready to take action if it goes ahead. There would be a huge campaign against it.”

The proposed coal exploration would involve geochemical and geophysical prospecting and construction of mobile camps along the road to Sinamatella Camp in Deka Safari Area, according to documents seen by the Guardian.

SustiGlobal, the consultancy that is conducting the environmental impact assessment, said the ministry of mines had approved an initial prospectus for exploring inside the perimeter of the park, which is normally forbidden.

“We passed the prospectus stage,” said Oliver Mutasa, the chief environmental consultant of SustiGlobal. “We are now conducting an environmental impact assessment and receiving comment from various stakeholders. After that, we will wait for permission from the ministry before drilling.”

Local media say the mining concessions have been personally granted by the country’s president, Emmerson Mnangagwa, who has previously expressed strong support for coal. This year, he visited the construction site of a thermal power plant in Hwange, which was scheduled to open in October.

Conservationists say surveyors have begun taking samples, which should not be allowed before the environmental assessment. A month ago, the rhino monitoring team of the Bhejane Trust said it came across a Chinese team drilling for coal without prior consultation with the area manager.

There are several open-cast mines outside the park, and a similar method of extraction could be used inside the perimeter where coal deposits are said to be close to the surface.

Mutasa said such speculation was premature: “The proposals are only for exploration. “The boreholes will tell us where the mineral is and determine what kind of mine and what quantities.”

Safari operators and conservation groups warn that any type of mine would harm the environment.

Stephen Long of Bhejane Trust, which works with Zimbabwe’s National Parks and Wildlife Management Authority in conservation of the Hwange area, said mines would bring noise and pollution.

“There is already a lot of Chinese investment in coal in Hwange area outside the park, much of it grossly polluting. Air quality in parts of Hwange must be as bad as most big cities, probably worse, and it is hard not to feel that the Chinese have already polluted their own country and are now exporting their pollution to poor countries such as ours. Zimbabweans are unlikely to see much benefit from the mines,” he said.

“When the rest of the world is getting out of coal and recognising the climate emergency, why is Zimbabwe expanding its use of the stuff and planning, according to the president, [to use it] for decades ahead?”

Residents of Lukosi village in Hwange reportedly filed a petition this year complaining of air and water pollution by other mining companies along Nekabandama Road and upstream of the Deka River.

This article was first published by The Guardian on 3 September 2020. Lead Image: Elephants and giraffes walk near a watering hole in Hwange national park in Zimbabwe. Photograph: Philimon Bulawayo/Reuters.