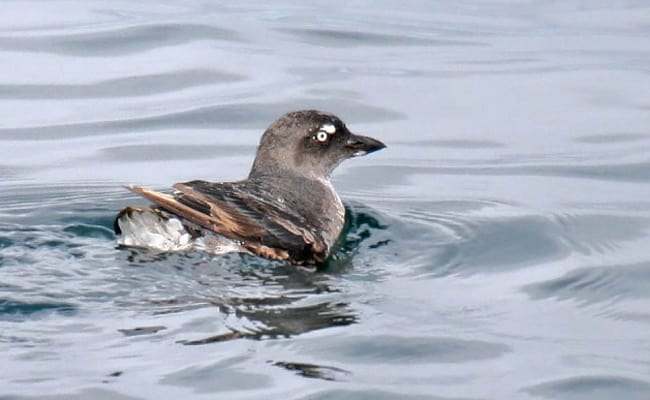 In 2014 scientists and beachgoers began finding west coast shores littered with thousands of small bodies. Their tragic discoveries would turn into what would become one of the largest seabird die-offs recorded yet, and now scientists have linked the cause to climate change.

The birds who were washing up were Cassin’s Auklets, a portly little seabird who can be found from Mexico to Alaska.

Scientists, along with an army of citizen scientists began recording dates and locations of the birds they found, and that information, along with data on temperatures and food, has not provided an answer to what killed them.

According to scientists, who just published their findings in the journal Geophysical Research Letters, the cause was starvation, and it led to the deaths of somewhere between 250,000 and 500,000 Cassin’s auklets between 2014 and 2015.

“This paper is super important for the scientific community because it nails the causality of a major die-off, which is rare,” said the study’s lead authorJulia Parrish, professor in the University of Washington’s (UW) School of Aquatic and Fishery Sciences and executive director of the Coastal Observation and Seabird Survey Team (COASST), one of the citizen science groups that counted the carcasses.

These birds are diving birds who feed mainly on zooplankton, or krill and copepods, but they were far less abundant during that time period. It’s believed that an enormous mass of warm water, which became known as “the blob,” pushed this food source too far away for the birds to get to. Instead, less nutritious food moved in, but it wasn’t enough to help them survive.

According to the study’s authors, this is the first time a direct link between marine heatwaves linked to climate change and marine bird mortality events has been documented.

“A lot of the evidence points to there being a very tangible link in the warming of the Pacific to changes in ecosystem structure that ultimately led to seabird starvation,” said lead author Timothy Jones, a UW postdoctoral researcher in aquatic and fishery sciences.

More concerning is that scientists are looking at this event as a small one, and fear worse is to come.

“This was a unique opportunity to have a window into the future,” Parrish added. “We are getting a sense of what the largescale ecosystem — the entire North Pacific up into the Bering and Chukchi seas — might look like in the future, and where we will have winners and losers and how we might see change. In that sense, it was a tremendous natural experiment.”

While this die-off is a tragic reminder of how fragile even large populations of wild animals really are, hopefully it will also be another wakeup call for us to do more to mitigate climate change.