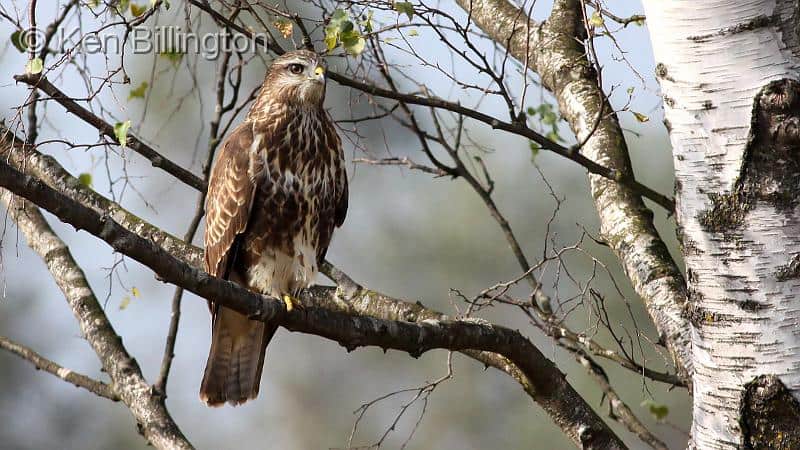 A 45 year old man, has been ordered to carry out 100 hours of community service after admitting to poisoning four buzzards. Today at Lanark Sheriff Court, David Alexander Whitefield was sentenced for killing the protected birds of prey whilst working as a gamekeeper at the Culter Allers Estate in South Lanarkshire in 2009.

On passing sentence, Sheriff Nicola Stewart said the punishment was a direct alternative to a custodial sentence and that poisoning is a serious offence.

During an earlier hearing, Whitefield claimed he was under pressure from his superiors to reduce the buzzard population “as he saw fit”, although he had not been specifically told to kill them or engage in illegal activity.

RSPB Scotland was first alerted to the estate in April 2009, when a member of the public reported finding two sick birds and a dead crow on a track near Coulter.

Tests by Scottish Government laboratories revealed the crow had been poisoned with a banned substance known as Alphachloralose.

Six months later, following similar reports, RSPB staff, accompanied by the Scottish SPCA, recovered a freshly dead buzzard lying on the remains of a rabbit, both tested positive for Alphachlorose.

Finally, on 11th November 2009, the Scottish SPCA led a multi-agency search of the estate, involving police, the National Wildlife Crime Unit, the Scottish Government and RSPB Scotland. During the operation, they discovered a large quantity of high concentration Alphachloralose poison in buildings used by Whitefield. Deadly fumigants, including the banned chemical Sodium Cyanide, were also found in unlocked outbuildings.

A search of a nearby small wood led to the recovery of a further two decomposing buzzards and a third freshly-dead bird hanging in a tree. All three were later confirmed to have been poisoned.

Speaking following today’s sentencing Bob Elliott, Head of Investigations at RSPB Scotland said: “We are pleased that Mr Whitefield’s actions have been viewed as a serious crime by the courts. We would like to commend Scottish SPCA for their hard work in ensuring this case resulted in a conviction. Today’s sentence is a reminder that the illegal practise of poisoning protected birds of prey will not be tolerated. With the introduction of vicarious liability at the start of this year, it is imperative that landowners are now clear with gamekeepers that this intolerable activity has no place in today’s society, or they too could also find themselves facing serious criminal charges before the courts.”

The conviction is Whitefield’s second for wildlife offences. On 1st October 2008 at Lanark Sheriff Court, Whitefield pleaded guilty to trapping a buzzard for at least 48 hours, and failing to meet its needs whilst it was in the trap. This was the first conviction involving a wild bird under the Animal Health and Welfare (Scotland) Act 2008. He was fined £300.

This post was written by the Royal Society for the Protection of Birds (RSPB), a registered charity: England and Wales no. 207076, Scotland no. SC037654