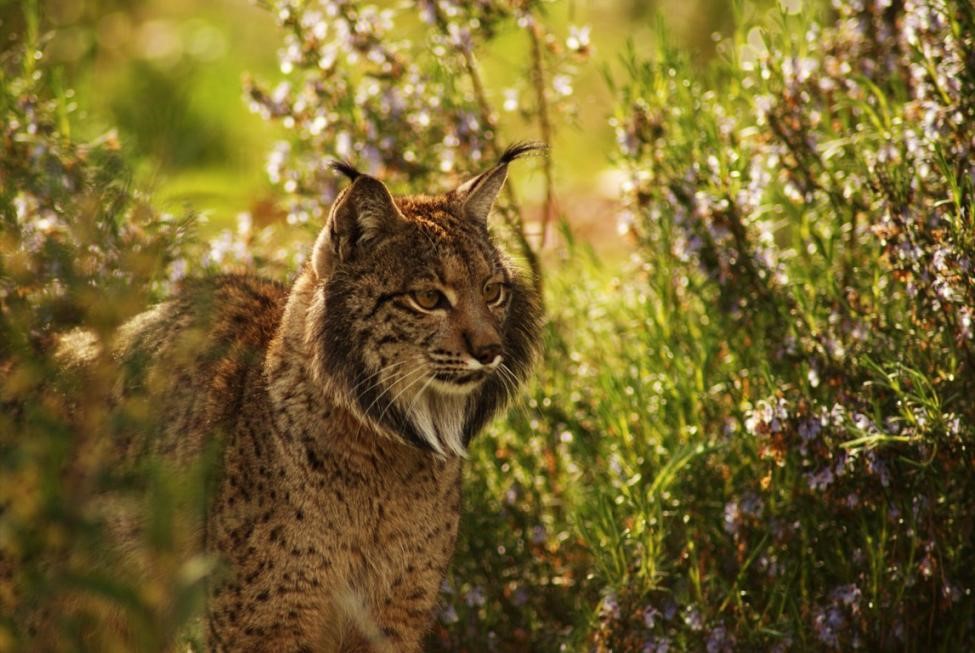 It’s midday in summer, the mercury climbing above 40° Celsius (104° Fahrenheit), and nature guide Nuno Roxo is leading us on a hike in Guadiana Valley National Park in Portugal. The high grass and herbs, battered by the strong sun, have not seen any rain for several months. We continue down a narrow trail, used by wildlife such as boars and deer. Rabbits bolt off into the bushes.

The scenario looks promising for the return of the region’s top predator, for which rabbits are the favorite prey: the Iberian lynx. Nuno says that in his many years of guiding, he’s only caught a glimpse of the elusive cats once, quickly whizzing by. The best chance to see them, he says, is by the sheep pens, where the lynx lie in ambush — but not for the sheep.

“The lynx catch the foxes that come to kill the sheep, so the landowners appreciate having lynx on their property,” Nuno says.

It wasn’t always so. Half a century ago, the Iberian Peninsula, comprising Spain and Portugal, was home to thousands of Iberian lynx (Lynx pardinus). The species is about half the size of the more common Eurasian lynx (Lynx lynx) found in cooler climates further north, but shared the same bad reputation for preying on livestock. That made it a favorite target of farmers, who saw it as vermin, as well as hunters who sought out its pelt and meat, or mounted it as a trophy.

It took until the early 1970s before the Iberian lynx was legally protected. But the decline continued, driven by habitat fragmentation, road kill, and loss of prey species, particularly the European rabbit (Oryctolagus cuniculus), which accounts for about 75% of the Iberian lynx’s diet. By the start of the new millennium, lynx populations had hit a dramatic low: in 2002, only 94 Iberian lynx still roamed Spain, and in Portugal the species was declared locally extinct. The species was considered the world’s most endangered cat, next to the Amur leopard (Panthera pardus orientalis), and was on track to becoming the first cat species to die out since the saber-toothed tiger 12,000 years ago.

Since that low, however, the cat has bounced back. In Spain, the government, scientists and environmental organizations have worked on reintroducing the lynx from animals raised at captive-breeding facilities. They have also worked with their peers across the border in Portugal, and in 2016, the first captive-bred lynx were released in Portugal’s southeastern Alentejo region, near the Spanish border. To date, 47 lynx have been released in Portugal.

There are now an estimated 1,000 Iberian lynx on the peninsula, with about 154 in Portugal’s Guadiana Valley. The remarkable comeback has seen the species’ conservation status improve on the IUCN Red List from critically endangered to endangered.

There’s no one silver bullet that can be credited with saving the Iberian lynx from extinction. Instead, the solution has been a combination of tried and tested conservation methods and innovative approaches, carried out across jurisdictions and helped by growing public awareness of the importance of conserving biodiversity.

Among the top threats to the species was the loss and fragmentation of habitat. Between 1960 and 1990, an estimated 80% of lynx range succumbed to degradation and habitat loss. Roads were a key part of this problem, obstructing the genetic exchange between different individuals and resulting in deaths from vehicle collisions. In Spain, building wildlife tunnels beneath busy highways has helped address the problem, and Portugal plans on emulating this solution. Creating wildlife corridors between the two countries is also tackling the genetic bottleneck, giving the animals back a natural range that transcends the concept of national borders.

“We are trying to increase their territory,” says João Alves, principal adviser to the government-run Institute for Nature Conservation and Forests, or ICNF by its Portuguese acronym.

He tells Mongabay he’s pleased by the results and hopes that extended corridors will see the lynx population grow further, although there’s still some way to go to securing enough range. Each lynx needs a territory of about 10 square kilometers (4 square miles), but the total area of current lynx territory in Portugal covers 500 km2 (193 mi2), which means more land must be secured.

“The lynx need habitat to live in,” says Olga Martins, regional director at the ICNF office in the city of Mértola in Alentejo.

A large proportion of potential lynx territory is privately owned, where landowners see more profit in cultivating olive groves and vineyards, turning the landscape into monocultures — barren land from a conservation perspective. To prevent this loss of viable habitat, the ICNF encouraging landowners to return to more traditional agroforestry systems called montados: a mosaic landscape characterized by low-density tree cover combined with agricultural or pastoral activities.

Another solution is rewilding. In Portugal, and elsewhere in Europe, environmental organizations such as Rewilding Europe are buying up land from farmers and other landowners with the express purpose of restoring the biodiversity. A key part of making such a solution work, especially for predatory species such as lynx and wolves, is to get the locals on board. This seems to be working in Alentejo, conservationists say. Landowners and hunters, previously hostile to the presence of lynx on their land, have changed their minds. Livestock farmers, in particular, have found that the lynx don’t attack domestic animals, despite their age-old reputation on this point.

The disappearance of the European rabbit from much of its historical range, due to epidemics of myxomatosis and rabbit hemorrhagic disease, was another of the factors that drove the decline of the Iberian lynx. Myxomatosis, a viral disease from South America, was intentionally introduced into France in the 1950s to control populations of wild rabbit, which were considered vermin by farmers. The virus then spread southwest through the Iberian Peninsula, decimating the rabbit populations there, and with them, the lynx.

As part of the lynx reintroduction program, conservationists are also trying to boost the rabbit population. In Alentejo, these efforts are sold as a win-win all around: for the residents, rabbit has long been a cherished game animal and part of the traditional cuisine. Many landowners have now built artificial tunnels for the rabbits in the extremely compact soil, and provide guided tours to visitors keen to spot lynx — even if the odds of sighting this elusive cat are slim.

There are currently four captive-breeding centers for the Iberian lynx: three in Spain and one in Portugal. The selection of animals for breeding and for release is determined by the Iberian Lynx Captive Breeding Committee, or CCCLI by its Spanish acronym. It brings together technical and scientific representatives from Spain and Portugal, who decide which animals will be released and where, to maximize the genetic diversity of the wild populations.

“If we have a total of 750 females on the Iberian Peninsula, it will be a viable number,” Alves says.

The outlook appears promising: Fifty kittens were born in the spring of 2020 in Guadiana Valley National Park, more than the number of captive-bred lynx released in Portugal in the past five years.

Addressing the range of threats to the Iberian lynx and devising solutions for each one has been key to pulling the species back from the brink, says Rike Bolam, a conservation scientist at Newcastle University in the U.K.

Bolam is the lead author of a study published last year that showed how conservation actions prevented the extinctions of seven to 16 mammal and 21 to 32 bird species since 1993. Among these is the Iberian lynx. (1993 was chosen as the baseline because that was the year the U.N. Convention on Biological Diversity came into force, ushering in a wave of zoo-based conservation programs, formal legal protections, and reintroduction efforts.)

“The Iberian lynx suffers from a wide range of threats, and I think it has been really important that not just one or two of them were addressed, but a whole range of them,” Bolam tells Mongabay. “The lack of prey has been addressed by habitat management, lack of den sites is addressed by providing artificial sites.”

Bolam adds that road accidents are decreasing as a result of traffic-slowing measures, and illegal hunting is also fading thanks to awareness-raising with the public and monitoring for illegal traps.

“In addition to addressing the direct threats, there have been translocations and reintroductions into other areas to boost the population,” she says.

That last measure will prove important for sustaining the Iberian lynx in the wild against another growing threat: climate change.

Climate projections show regions in the south of the Iberian Peninsula where the lynx currently occurs may no longer be suitable for the species. The current reintroduction program, which is expanding the lynx’s range to the north, could improve its resilience to climate change.

“[I]t may help the species to spread to northern parts,” Bolam says, “mainly by reintroducing the species to other areas, as there is a lack of habitat corridor.”

She says the battery of conservation solutions that saved the Iberian lynx can be applied to other species on the brink. Many species face common problems, she notes: habitat loss through agriculture, and direct threats through logging, hunting and fishing.

“There are now models that show we can limit these drivers whilst still feeding everyone,” Bolam says. “But it will require changes in consumption practices, such as stopping food waste and eating less meat, as well as limiting climate change.”

This article by Johan Augustin was first published on Mongabay.com on 12 March 2021. Lead Image of an Iberian lynx by www.lynxexsitu.es via Wikimedia Commons (CC BY 3.0 ES).

Support ‘Fighting for Wildlife’ by donating as little as $1 – It only takes a minute. If you can, please consider supporting our efforts with a regular amount each month. Thank you.