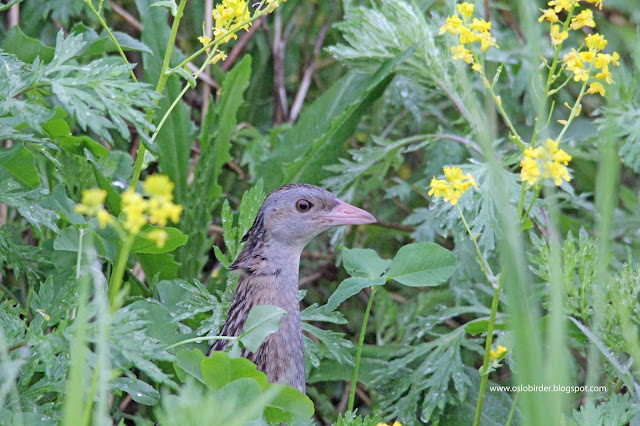 When I awoke to rain and low cloud this morning the only thing I thought about was how silly I had been to hang washing out to dry overnight. I have clearly moved on from migration modus and into breeding bird modus. If I had still my migration antenna up I may have chosen to go out to Årnestangen (which has been kind to me this spring) and then I may have found the Little Tern that instead fittingly fell to Årnestangen stalwart Erling Hobøl.

When the message on the tern ticked in just before noon I actually got twitchy, did a u-turn and considered driving out for it but my senses got the better of me and an empty stomach was rewarded with lunch.  So what birding did I do today? Well as I was in breeding bird modus I was checking out Sørkedalen and close by areas.

A few nights ago a Corncrake with a strange song was reported singing. The consensus seems to be that this is the song of a female (which has only recently been properly understood). A couple of days later her far from dulcet tones had attracted three! males to vie for her affections. Early returning birds can often be easier to locate and see because they sing intensely and the grass has not yet grown high. I also thought that the gloomy conditions today would actually mean there was more likelihood of birds singing during the day so set off after the girls were despatched to school with moderately high hopes.

The area where the birds had been reported turned out to be surprisingly small and urban with a main road, large car park, kindergarten and a couple of farms surrounding it. The fields all had crops only a few centimetres high but an area of waste ground right by the kindergarten had a lot of lush grass, nettles and sedges and it was clearly here I would find the bird(s). One was singing when I got out of the car and I positioned myself in a good place and waited and hoped that there would be some activity. It is my experience that singing birds often are visible or at least their head is and it is just a matter of being able to locate them -which I did.

My best ever views of Corncrake ensued although I had to call it a day as the worsening rain threatened the future of my cameras.  After this I went into Sørkedalen where among other exciting species I had Red-backed Shrike and Common Rosefinch. The highlight though was 4 quite large young Lapwings and four adults. Breeding had failed on this field last year (making Maridalen the only place in Oslo with successful breeding) and although some small young had been seen here earlier this spring there have been no other reports and the farmer has since sown the field so another failure was assumed – but no four young of this size is very promising!

In Maridalen however things do not look so promising (after a good breeding season last year). I believe there were 3-4 pairs attempting to nest this year at Skjerven but today I could only see 2 adults in the long grass and no indication of any young. Five birds were feeding at Kirkeby which is not a good sign as if they had young then I would have expected them to be with them.

Tomorrow I am guiding in Hedmark for some very specific and exciting birds – hopefully I have been kind to the bird gods recently. 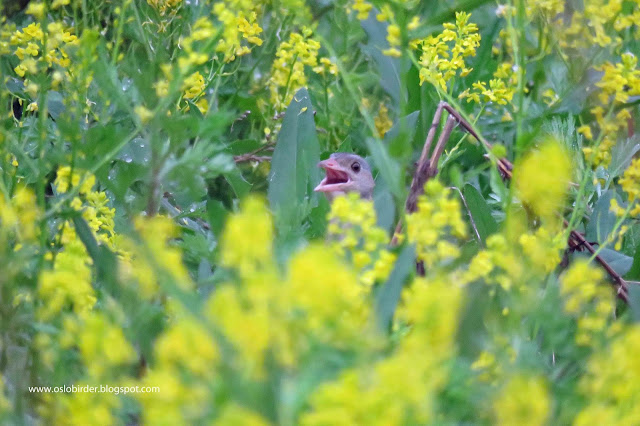