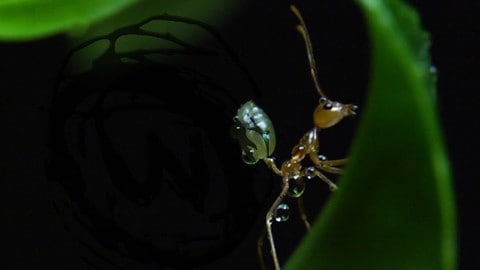 Recently Melbourne researchers have found that green weaver ants memorise the odour of other green ants and use this to sniff out rivals and do battle.

What an interesting reveal, especially when this “whiff” propagates amongst media news frenzy and a global run on the subject, goes a-wire!

How much more could one tell about these whiff encounters?

How about if “Mother Nature” intervened by simply deploying a natural event as a situation deodoriser?

Well, I went on, investigating and soon enough, there it was …  the case of two equally distant founding colonies and yes they were all engaged into another smelly battle while one of the queens was found to be “gassed out” and dying of unknown reasons.

As all the team supporters battled for whatever fragrant odours they approve the most, I stood aside and watched. Finally, the answer before my lens, If these ants and including their respective ant nests are sprayed with enough forceful water in this case natural tropical heavy downpours, the result is also somehow quite remarkable and fascinating. (hopefully I will get recognised with a “PhD” Pure hard Documentary as accuracy to my findings)

The dead queen is ousted from the nest, (rotting smells are obviously not approved) and overnight, all ants re-grouped (larvae and all) and joined as “One”, the newest and immediately sizeable founding nest.

Amazingly, after all this “smelly commotion”, just a few dead ants where found after this amalgamation.

So Green Weaver Ants may memorise their opponents by smell and do battle, but as the say goes, “Water Washes All Sins” and appropriately smells!!