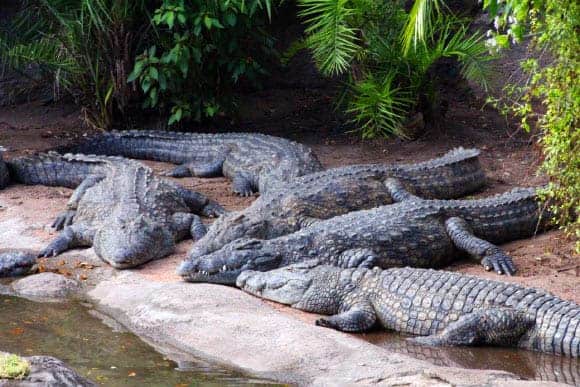 Studying predatory behavior by crocodiles, alligators and caimans in the wild is notoriously difficult because they are ambush hunters, have slow metabolisms and eat much less frequently than warm-blooded animals.

In addition, they are mostly nocturnal and often hunt in murky, overgrown waters of remote tropical rivers and swamps.

Accidental observations of their hunting behavior are often made by non-specialists and remain unpublished.

He also looked through diaries of scientists and conducted more than 3,000 hours of observations himself.

All that work produced just a handful of observations, some dating back to the 19th century.

Still, the observations had something in common – coordination and collaboration among alligators and crocodiles in hunting their prey.

For example, crocodiles would swim in a circle around a shoal of fish, gradually making the circle tighter until the fish were forced into a tight bait ball. Then the crocodiles would take turns cutting across the center of the circle, snatching the fish.

“A larger crocodile repeatedly chased fish towards the shore with powerful splashes of its tail, while smaller, more agile crocs waited in the shallows, ready to snatch the cornered fish,” Dr Dinets cited an observation of cooperative fishing in estuarine crocodiles (Crocodylus porosus) made by the renowned 19th century explorer, anthropologist and biologist Nicholas Miklouho-Maclay.

Dr Dinets also cited another observation, made in 2011 by Chip Campbell in the Okefenokee National Wildlife Refuge, Georgia: “one morning in early May, we arrived at work to find approximately 60 American alligators (Alligator mississippiensis) gathered in our boat basin. This gathering demonstrated the most consistent and seemingly coordinated behavior I have yet observed. The animals appeared to alternate between two strategies: the ‘driving’ phalanx described about and something I called the ‘purse seine’ approach – the phalanx would ease itself into a loose semi-circle and then close in, pushing the fish into the shallows and against the bulkheads.”

“Hunting behavior was almost constant, but at any given time, 1/3–1/2 of the animals seemed to be resting and ‘waiting their turn.’ When an alligator captured a fish, it would swim over and join the ‘resting’ gators after swallowing its fish – and one of the previously dormant gators would slide out to join the active hunting group.”

“This continued until about lunch time, at which point most (not all) of the alligators began to break away and disperse. They did it again the following morning – about the same number of alligators and for about the same length of time.”

In other example, a huge saltwater crocodile scared a pig into running off a trail and into a lagoon where two smaller crocodiles were waiting in ambush – the circumstances suggested that the three crocodiles had anticipated each other’s positions and actions without being able to see each other.

“All these observations indicate that crocodilians might belong to a very select club of hunters – just twenty or so species of animals, including humans – capable of coordinating their actions in sophisticated ways and assuming different roles according to each individual’s abilities,” Dr Dinets said.

“In fact, they might be second only to humans in their hunting prowess.”

Dr Dinets reports his results in the journal Ethology Ecology and Evolution.

“More observations are needed to better understand what exactly the animals are capable of,” Dr Dinets concluded.

This article was first published by SciNews.com on 14 Oct 2014.