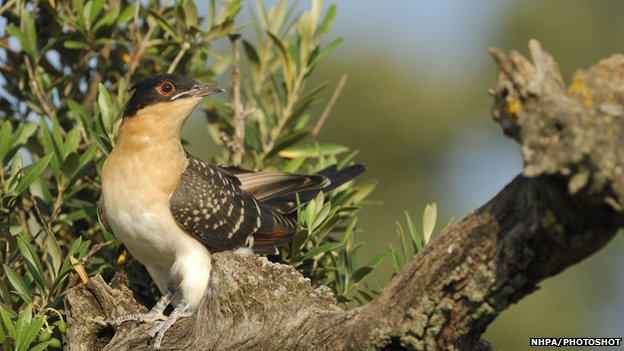 Great spotted cuckoos lay their eggs while magpie mothers are still sitting on their nests, a study has shown. Cuckoos are known for deceiving other birds into raising their young by depositing their eggs into host nests. It had been thought female cuckoos waited until host birds left the nest before secretively laying their eggs.

But researchers were surprised when they recorded female cuckoos forcing magpies out of the way as they sat incubating their eggs.

The scientists, from Spain and Belgium wrote: “Great spotted cuckoo females entered the nest more frequently when the magpie female was incubating than when the nest was empty.

“This implies that great spotted cuckoo female behaviour is not secretive at all.”

Details of their findings are published in the journal Ethology.

They had expected to observe great spotted cuckoos (Clamator glandarius) using secretive behaviour around the nests, such as working in pairs to distract the magpies into leaving their clutches unattended.

Instead, they discovered female cuckoos endured attacks from incubating magpies and forced them out of their nests so they could speedily lay their own eggs in the clutch.

This egg-laying tactic appeared to work every time. And after the cuckoo had left, the magpie incubated the imposter egg along with its own.

“In spite of the violent attacks by magpies, they never succeeded in preventing the cuckoo female from laying her egg,” the researchers observed.

The video recordings could offer new insight into the “arms race” between “brood parasite” birds and “host” birds – where species adapt and counter-adapt to try to succeed over each other.

The researchers suggest the magpies may have evolved the defensive behaviour of remaining sitting on their nests in response to cuckoos’ attempts to distract them.

“Cuckoos then are forced to adopt the only possible solution: to lay their eggs facing the risk of being attacked by the incubating magpie,” they wrote in the study.

Female great spotted cuckoos may lay up to 13 eggs in a single host’s nest.

This article was first published by BBC Nature.

Very interesting; I wonder if the magpie ever gravitates towards certain babies more?

Thank you really very interesting. Where there's a will there's a way with the cuckoo.

that is quite interesting observation. Myth is blasted !