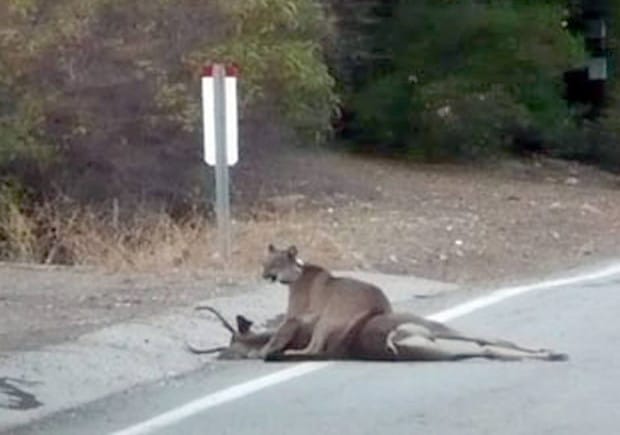 Known for its scenic vistas, Mulholland Drive intersects the city of Los Angeles and is popular with residents and tourists for its splendid views. But one view you don’t usually encounter is a mountain lion eating a deer. Irv Nilsen, who took these amazing photos, happened to be riding his motorcycle on Mulholland this past Sunday and became the first person to discover the mountain lion.

Soon after, cyclist Danny Benson pedaled by and also received a big surprise. As he told CBSLA News last night, at first he just thought the deer was roadkill.“I saw there was this dead deer, and thought, that’s awful. Then I saw the deer moving. And I moved forward and realized, ‘Oh my goodness. It’s a mountain lion pulling the deer,’” said Benson.

Mulholland Highway runs through the Santa Monica Mountains Recreation Area and the National Park Service biologists could easily identify the lion from her collar. Kate Kuykendall, a spokesperson for the National Park Service (NPS), described the lion. “P-23 is a young female who recently dispersed from her mom. This is one of the first kills she has made on her own. We’ve been following her since she was a kitten.”

And is it normal to see a mountain lion on this road? According to Kuykendall, this is a rare sighting and park rangers have spent their entire careers in this area and never seen one. Although the road runs through urban Los Angeles, this isn’t an unusual spot, however, to have a wildlife encounter. “Despite the fact that this happened on our very well-known highway in L.A., it was a remote section and a very natural area (and actually NPS land).”

For now P23 appears to have finished her meal and has moved away from the area. So those driving along Mulholland will have to return to being content with the views of the Santa Monica Mountains and the Hollywood sign.

And might this be a possible mate for P22, the “Lion King” of Griffith Park in Los Angeles? Stay tuned!

I had a chance this afternoon to talk with the cyclist in the photo, Danny Benson, who had the surprise of his life when he stopped to see what he thought was a dead deer on the roadside, but then realized a live mountain lion was dining on it.

When did you realize you were seeing a mountain lion?

I had left home that morning when it was dark but it was clearly light by then. I ride that same 45 mile route most Sundays, and ride by the ocean and up into the hills. I pedaled around the corner and thought I saw a deer on the side of the road. I kept going. The reason I got as close as I did is that I saw the gentleman up ahead of me who had stopped on the side of the road with his big motorcycle and I was trying to figure out what he was doing. He is the one that took the photos.

Then all of a sudden I realized the deer was moving, and I thought, “Oh, you have to be kidding me. There is a mountain lion dragging the deer!”

I moved to the other side of the street pretty quickly.

Were you afraid when you saw the mountain lion?

No, I wasn’t really all that afraid. It was mesmerizing. I was more alert than afraid. The mountain lion stared me down for a moment but then went back to the deer. I did not really feel threatened as long as I did not move forward. She was not going to give up her deer .

What did you do to move past the lion?

There was no way I was moving past the lion by myself. I waited until a car came and waved him down. He did not see the lion at first. He drove next to me and was nice enough to take me a half a mile past the lion. The mountain lion stayed tight before we were at least 10 feet away then she bounded down the hill.

What other wildlife have you encountered on your rides?

I have been road and mountain biking for twelve years here in the Santa Monica Mountains, and I’ve seen bobcats and skunks and coyotes and deer. This spring coming up Latigo Canyon Road I saw a much bigger mountain lion run across the street.

This is your second mountain lion sighting?

Yes. I think I really don’t need to see another one. But seeing them makes you respect wildlife. It makes you realize even in riding on Mulholland Highway you need to be respectful.

This article was written by Beth Pratt for Wildlife Promise.