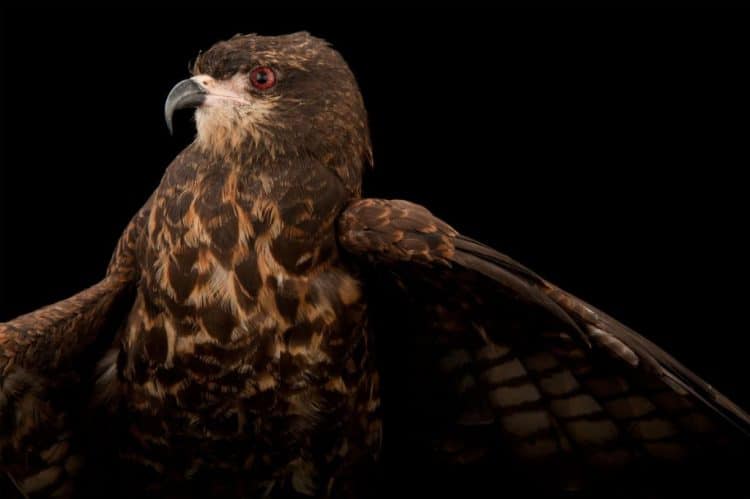 It’s not easy to make a living as a bird of prey, especially if you’re a Florida snail kite. Once at risk of starvation due to declines in its favored prey, the endangered bird is now facing a terrifying threat: a deadly disease that drives birds insane.

True to its name, the foot-long snail kite eats only snails—its hooked beak is the ideal shape for plucking muscular morsels from whorled shells. But an adult raptor must find and eat dozens of snails every day to survive, more if it’s feeding babies.

Unfortunately for the birds, Florida’s native apple snails aren’t doing well. Half of the Everglades wetlands are now developed and riddled with canals and levees, leaving water unpredictable in their habitat. Droughts alternate with floods to desiccate eggs and drown adult snails.

Since ecologist Phil Darby from the University of West Florida began monitoring the snails in the mid-1990s, their population has declined tenfold. “The native snails are just gone,” he says. The kites started following suit, hitting a population low of 800 birds in 2008.

Then an unlikely savior arrived: exotic apple snails from South America. The golf ball-size invasive snails, dumped into Florida’s waterways from home aquariums, are bigger than their native relatives. They can survive drought and flooding, they lay more eggs, and they live longer.

Perhaps most importantly, snail kites readily devour them. Since the exotic snails became prevalent, the kite population has climbed to over 1,700 birds as of 2014.

“If it wasn’t for the exotic snail, we would have come real close to losing snail kites in the United States,” says Ken Meyer, executive director of the Avian Research and Conservation Institute in Gainesville.

Meanwhile, across the Florida border, University of Georgia ecologist Susan Wilde has been tracking a mysterious lethal disease known as avian vacuolar myelinopathy, or AVM. The disease’s sole physical traces are microscopic brain lesions, visible in birds only after they go mad and die.

Because the disease is difficult to observe, Wilde doesn’t actively track afflicted birds. Instead she follows the disease’s cause, a toxic species of blue-green algae that grows on aquatic plants. It has a particular fondness for hydrilla, an invasive plant that was also unleashed into U.S. waterways by aquarium owners.

When waterfowl such as coots and ducks eat algae-covered hydrilla, they can be infected with the brain disease. Sick birds become lethargic, eventually losing the ability to fly or forage. Their odd behavior attracts the attention of bald eagles and other raptors, and when they eat infected waterbirds, the predators develop the disease too.

“Once they get to the point where you would be able to notice that they’re clinically impaired, they’re almost dead,” Wilde says of affected eagles. Most sick birds die within days or weeks.

In the last decade, Wilde has collected toxic algae-coated hydrilla in Arkansas, Georgia, both Carolinas, and Texas. In 2009, at the behest of the Florida Fish and Wildlife Conservation Commission, she headed to Florida to hunt for AVM’s cause in the hydrilla-infested lakes where snail kites forage and breed. The algae is invisible to most people, but not to Wilde.

“I have looked for it so much, so obsessively, that I can tell even with the naked eye if it’s there or not,” she says. As she road-tripped from Gainesville south to the Everglades, sampling lakes along the way, she grew increasingly concerned about the endangered kites. She found the algae in seven of the 25 lakes she visited, including the Kissimmee Chain of Lakes, Lake Istokpoga, and Lake Toho (short for Tohopekaliga).

Lake Toho in particular worried her. Filled with exotic apple snails, the lake was a major breeding site for snail kites as they recovered. The lake is also lush with hydrilla, and the invasive snails thrive on the plants, feeding on its leaves and scaling its stalks for a breath of fresh air at the surface.

During her sampling efforts, Wilde found algae-covered hydrilla growing around the lake’s border, appearing in high densities in some places. While kites don’t eat the plants, they do snatch up snails from the lake, upping their chances of coming into contact with AVM.

She brought Lake Toho hydrilla back to Georgia for a series of experiments on chickens, a laboratory stand-in for wild birds. She fed algae-covered hydrilla to exotic apple snails, and then fed those snails to chickens to see if they developed AVM.

Within two weeks, three of the five chickens began acting strangely, she reports in a study in the April edition of the Journal of Wildlife Diseases. After a necropsy, all five birds had the microscopic brain lesions characteristic of the disease.

To date, no snail kites are known to have died from AVM. But to diagnose the disease, a dead bird has to be found and necropsied within a day, before the brain lesions decompose. If a snail kite dies of AVM while perching over Lake Toho, its body will fall straight into the water, never to be found or diagnosed.

Meanwhile, the disease has killed thousands of waterbirds, as well as nearly 200 bald eagles and a handful of geese, hawks, owls, killdeer, and probably more avian species. That makes Wilde and Meyer worried about the snail kites.

“We know it’s on the hydrilla, and we know it’s in the snails in Lake Toho, the place where most snail kites have been for the last bunch of years,” says Meyer. “So it would be very hard to believe that they’re not dying from it.”

Later this year, Meyer plans to track the birds by radio, and if any stop moving, he’ll bring the bodies to Wilde for a definitive diagnosis. If they do find AVM in Lake Toho’s birds, conservationists will be faced with a difficult decision. To protect birds from the disease in the long term, they’d need to control the algae by cutting down the thick underwater forests of hydrilla.

That means uprooting the plants that support and elevate exotic apple snails, the very reason for the kites’ continued survival. To Meyer, the choice is clear.

“We’re talking about a disease … that’s killing other birds too, I’m sure,” he says. “We’ve got to control hydrilla.”

This article was first published by National Geographic on 18 May 2016.