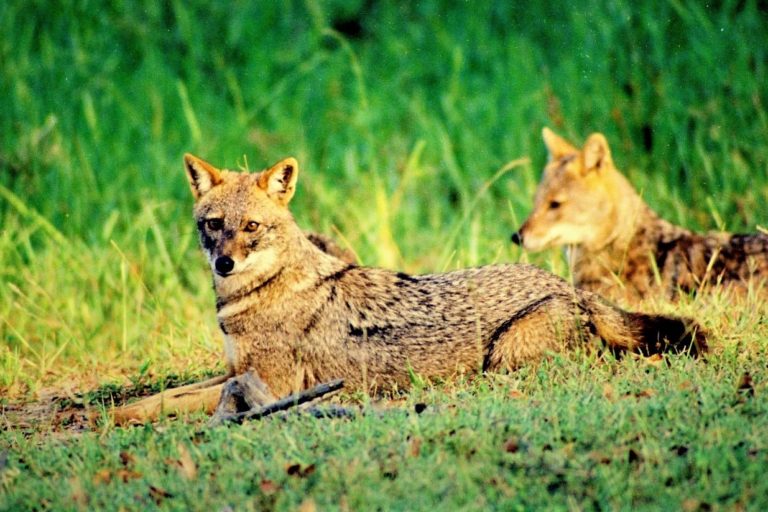 COLOMBO — Gayan Chamila, a resident of a village near Horana in western Sri Lanka, recalled rushing to his backyard in response to hearing an animal cry. There, he found a golden jackal (Canis aureus naria) chasing his dog. The jackal then turned on Chamila, snarling. The villager managed to grab a wooden pole to defend himself, beating the jackal until it was dead. A necropsy carried out later confirmed villagers’ fears: the jackal was rabid.

Tales of attacks by rabid jackals began emerging a few weeks earlier, in Millaniya, a village about 20 kilometers (12 miles) north of Horana. Two villagers there were attacked by jackals and died of rabies, a viral disease that causes inflammation of the brain.

One of the victims was an 8-year-old girl, Kavini Nethsara, who died Sept. 9. Her mother told media that a jackal had chased and caught the child by her dress, and she fell and injured her leg. According to the mother, doctors didn’t administer any anti-rabies shots because they were told the jackal didn’t bite her. A week later, however, she developed symptoms of rabies and died. It’s now believed the saliva left by the jackal after biting her dress had passed into her open wound.

The second victim was bitten on the face when he bent to pick up a stone to hit the jackal. Rabies mainly attacks nerves, and the wound’s proximity to the brain can speed up the contraction process.

While both deaths were tragic and avoidable, the subsequent news reports and sensationalized videos prompted panicked villagers to demand that jackals be killed. Videos emerged of villagers armed with sticks and knives carrying out night patrols around their homes.

“There is a problem in the two identified locations, Millaniya and Horana, as several rabid jackals have been attacking people,” said Tharaka Prasad, the director of wildlife health at Sri Lanka’s Department of Wildlife Conservation (DWC). “We identified at least five rabid jackals and a few have been already killed by villagers while others were found in a weak state and died a few days after, while in our custody.”

A number of cattle in these villages have also tested positive for rabies, he added.

Prasad told Mongabay there are sporadic cases of jackals contracting rabies, but this is the first time that reports of a widespread rabies outbreak among the jackal population has been reported to the DWC. He said the disease may have spread initially from a rabid dog in the area.

The Sri Lankan subspecies of the golden jackal (Canis aureus naria) is a beautiful animal with a reddish-brown coat of hair with long black tips at the end; the “gold” shading is not always visible. Image courtesy of Harsha Matarage.

Vaccination is the main weapon to control rabies outbreaks among dog populations, but the COVID-19 lockdown has slowed or put on hold what used to be routine matters. This includes the anti-rabies campaign, which may have contributed to the current situation, Prasad said.

Chandana Sooriyabandara, the DWC’s director-general, told Mongabay there have been public requests to catch jackals from many areas, including places where the species is found but where attacks by rabid animals have not been reported. Sooriyabandara said that while a rabid jackal may be put down, it was impractical to kill jackals everywhere or try to translocate them away from human settlements. “The fears are fueled by speculative media reports that sensationalize when reporting a handful of incidents,” he said.

Some media outlets have quoted villagers claiming packs of 20 to 30 rabid jackals are prowling near their homes, and that entire villages are under siege. However, DWC teams carrying out night patrols in those locations failed to find any jackals posing an open threat.

“It is not about jackals, but a consequence of poor rabies control,” said Nalinika Obeyesekere, a senior veterinary surgeon and founder of veterinary NGO the Blue Paw Trust. “Rabies is a viral infection that primarily impacts dogs, and if not controlled through vaccinations, there could be a spillover to other species, as in the case of these jackals,” Obeyesekere told Mongabay.

According to the World Health Organization (WHO) dogs are the main source of human rabies deaths, accounting for up to 99% of all rabies transmissions to humans globally. Available data show that rabid dog bites account for about 96% of all animal bites in Sri Lanka, while another 2% come through domesticated cats. Wild animals accounted only for 2% of reported cases.

Domestic animals such as cattle, buffalo, pigs, sheep and goats can also be vehicles for rabies, but because they don’t tend to bite, the transmission opportunities to human or other animals remain minimal.

In Sri Lanka, even an elephant bitten by a rabid dog has died of rabies.

However, reported cases of rabies in different species in Sri Lanka from 2005 to 2014, based on data from the government’s Medical Research Institute (MRI) and the Department of Animal Production and Health, don’t include the golden jackal in their list of 18 animals. This underscores that numbers of rabies transmission by jackals is negligible.

The jackal is the only wild canid living in Sri Lanka. It’s an omnivorous opportunistic feeder, able to adapt to a wide variety of habitats and also able coexist in human landscapes. In the absence of vultures, the main cleansing role in Sri Lankan wilderness areas has been carried out by jackals.

Given that the leopard (Panthera pardus kotiya) has restricted distribution, the jackal is the top predator in most of Sri Lanka, controlling populations of herbivores. The island’s other key predator with a wide range, the fishing cat (Prionailurus viverrinus), feeds primarily on fish.

Removing jackals from the ecosystem would create an ecological imbalance that may trigger an increase in pest species, said Devaka Weerakoon, a professor of zoology at the University of Colombo.

One such example is the expansion of peafowl populations, a major pest in many areas.

“Though scientifically unproven, it is possible that reduction of the jackal population contributes to range expansion of the peafowl,” Weerakoon told Mongabay. “There could be more such services jackals silently perform, but the absence of research does not support a scientific conclusion.”

The golden jackal’s conservation status is categorized as being of least concern on Sri Lanka’s 2012 National Red List; a revision of the list is currently underway. “Lack of research on jackals is a problem in understanding the species and their status,” Weerakoon said.

Once a frequent sight

Sampath De Alwis Goonatilake, senior program officer with IUCN Sri Lanka, grew up near the Bellanwila-Attidiya wetlands, about 12 km (7.5 mi) from the heart of Colombo, Sri Lanka’s commercial capital. He recalled jackals being frequently sighted in the 1970s and early ’80s. “But jackals cannot be found in the area now. Likewise, there are lot of known local extinctions indicating population decline,” Goonatilake told Mongabay. He attributed habitat loss as the main reason for the decline.