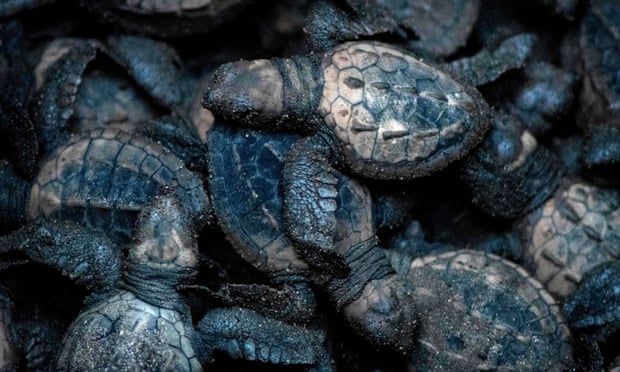 Decoy eggs made by a 3D-printer and fitted with satellite tags have been placed in sea turtle nests on beaches in Costa Rica to track the illegal trade of their eggs.

A quarter of the fake eggs put among 101 turtle nests on four beaches in Costa Rica were stolen, with some eggs successfully tracked as they moved from thief to trafficker to consumer.

The egg decoy, dubbed the InvestEggator, was developed by the conservation organisation Paso Pacifico to track the illegal raiding of eggs from nests buried in the sand for trafficking and sale to restaurants, bars and individuals as a delicacy.

Researchers found that the decoys did not damage incubating embryos and could successfully track the illegal trade of green and olive ridley turtles eggs and identify trafficking routes, according to a study published in Current Biology.

The early evidence suggests that the eggs do not travel far from the beaches where they are snatched. One of the fake eggs was taken close to a nearby residential property, another travelled 2km to a bar, while the farthest-travelled went 137km inland, spending two days in transit.

In one case, the discovery of the transmitter-egg led to useful intelligence. Eleven days after the decoy stopped responding in Cariari, a town 43km from the beach, the researchers received photographs, sent from Cariari, of the dissected egg. They also received evidence about where the egg was purchased and how many had been exchanged – useful intelligence for the local authorities seeking to protect the eggs.

Helen Pheasey of the University of Kent and lead author of the study said: “Knowing that a high proportion of eggs remain in the local area helps us target our conservation efforts. We can now focus on raising awareness in the local communities and direct law enforcement to this local issue. It also means we know where the consumers are, which assists us in focusing demand reduction campaigns.”

According to Pheasey, it is less important to find the people who take the eggs from the beach than identify those who are trafficking and selling the eggs, often door to door, and identifying handover locations. “As trafficking is a more serious crime, those handover points are far more valuable from a law enforcement perspective than catching someone taking a nest,” she said.

Not every decoy was successful at deceiving the thieves. Six fake eggs were recovered on the beach, suggesting they had been swiftly discovered and discarded by collectors. Out of the decoys that remained in untouched nests, 32% failed, probably because moisture penetrated the seals and damaged the transmitter.

Although the decoys were set to transmit every hour, some also failed to transmit because they were moved to areas where they could not obtain a signal. Researchers said this would improve as infrastructure developed on the Caribbean coast.

The decoys were designed by Kim Williams-Guillén for Paso Pacifico after she was inspired by the tracking devices used to monitor drug dealing in Breaking Bad and The Wire.

She said: “In one episode of The Wire, two police officers plant an audio device in a tennis ball to surreptitiously record a suspected drug dealer. Turtle eggs basically look like ping-pong balls, and we wanted to know where they were going – put those two ideas together and you have the InvestEggator.”

Williams-Guillén said she hoped the technology could be used to protect more turtle populations, as well as potentially be adapted to monitor egg thefts from crocodile and parrot nests, as well as track shipments of shark fins.

But she said to eradicate the turtle egg trade it must be part of “a multi-pronged conservation approach that uses education, building better economic opportunities, and enforcement to help fight sea turtle egg-poaching”.