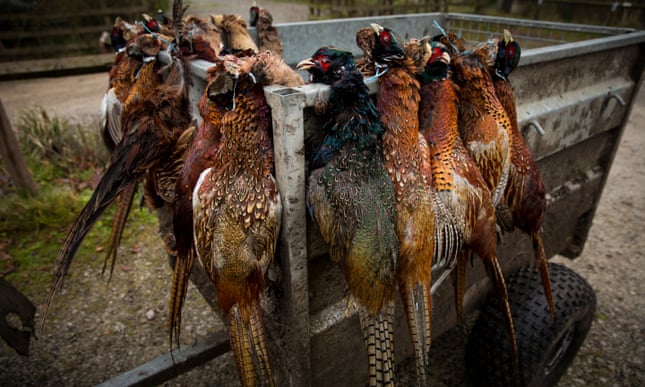 Environmental campaigners have issued a legal case against the government to try to halt the release of more than 50m non-native game birds this summer, saying the birds could damage Britain’s most important wildlife sites.

Wild Justice, a campaign group led by the environmentalists Chris Packham, Mark Avery and Ruth Tingay, said the annual release of 47m pheasants and 10m red-legged partridges was “unlawful” without a proper assessment of the ecological impacts the animals have on protected areas.

At their peak, these birds, mainly imported from France, Belgium, Spain and Poland, represent half of the UK’s total bird biomass. Wild Justice lawyers have asked for a judicial review because they believe the Department for Environment, Food and Rural Affairs (Defra) could be in breach of the EU habitats directive by allowing the release of these birds in the countryside.

Although game birds are not allowed to be directly released at Special Areas of Conservation (SACs) and Special Protection Areas (SPAs), they are allowed to be released nearby. Wild Justice believes this indirectly affects rare and protected wildlife.

Defra has three weeks from 24 February to file papers with the court. Then a judge will decide whether this issue should go to court and how long it should take.

Avery said: “Pheasants go wherever they want. They turn up on nature reserves where they’ve never been released … This is a very serious ecological assault on the countryside which government is failing to assess and regulate.”

Only 30% of recreational game birds are shot, killed and retrieved. The others die of other causes and provide winter food for scavengers such as foxes, carrion crows and rats, whose populations remain artificially high as a result. Conservationists are concerned that these scavengers will eat more vulnerable species such as curlews and lapwings nesting at nearby nature sites.

Avery said: “These non-native game birds go around gobbling up insects, other invertebrates and even snakes and lizards, they peck at vegetation, their droppings fertilise sensitive habitats which no farmer would be allowed to fertilise, and they provide prey and carrion that swell the populations of predators that then go on to prey on other threatened species.”

Tingay described the lack of regulation on released game birds as staggering. “The government doesn’t seem to know or care how many are released each year and even the figure of 60m game birds may well be an underestimate.”

Defra has previously acknowledged that the release of game birds might require assessment and has pledged to review the way it measures the birds’ impact. It said it would not carry out an assessment this year as it was neither “reasonable nor realistic to expect measures to be taken before summer/autumn 2020”.

Lawyers for Wild Justice are calling for immediate action, however. Packham said: “Defra has been dragging its feet on this issue since we first raised it. It is time to sort this out and Wild Justice is fully prepared for a court battle on behalf of UK wildlife.”

Defra declined to comment on the latest legal action, but said it was reviewing the number of game birds released and their impact on protected sites.

Alexander Lees, a senior lecturer in biodiversity working at Manchester Metropolitan University, said it was important to interrogate the ecological impacts of releasing large numbers of non-native birds. However, he said game management could benefit wildlife.

Lees said: “The rapid rise in the number of pheasants and red-legged partridges released follows the collapse of populations of native lowland game birds like grey partridges – species decimated by agricultural intensification and habitat loss. If shooting interests can refocus on recovering populations of our native game species through habitat restoration … then they would find many more allies among conservationists.”

Until December, the UK government has to abide by the EU’s habitat directive. “We are afraid that some of this protection will be diminished in the future [when the UK’s Brexit transition period ends],” he said.

The conservationists’ legal action follows a successful challenge made by the campaign group last year to get the government to reassess the “general licences” system that allowed people to shoot “pest species” of birds. Their legal action led to the introduction of more restrictive temporary licences.

This article was first published by The Guardian on 26 February 2020.