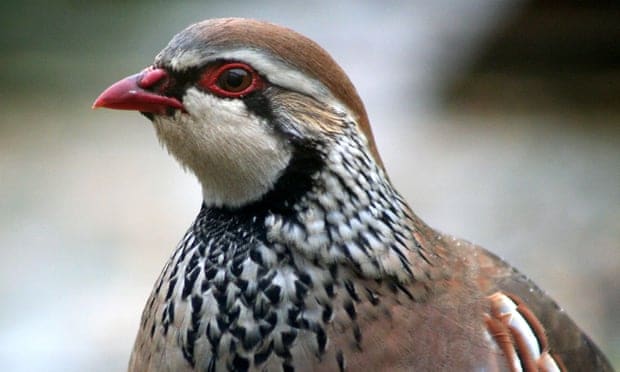 The annual release of more than 50 million non-native game birds into the countryside with no environmental assessment is to be reviewed by the government after campaigners announced a legal challenge.

Chris Packham, Mark Avery and Ruth Tingay, of the campaign group Wild Justice, argued that the massive and unregulated increase in the number of pheasants and red-legged partridges put into the British countryside for shooting each year – up from 4 million in the early 1970s – contravened the EU habitats directive.

Under these laws, the impact of game birds on the biodiversity of protected areas must first be assessed. Pheasants and partridges can prey on native reptiles and amphibians, while recent scientific evidence has shown an association between game birds and higher numbers of foxes and avian predators such as crows, which in turn prey on rare species such as curlew.

The Department for Environment, Food and Rural Affairs (Defra) has confirmed there will be a review of the way game birds are released on or near protected areas such as special areas of conservation in England.

The review will not affect this year’s pheasant and partridge shooting season, which begins on 1 October, but Wild Justice claimed its second successive victory since it was established this year.

In the spring, the group’s challenge to the government’s system of general licences, which permits the shooting of “pest” species such as pigeons, prompted the authorities to hurriedly withdraw the general licence and issue new, more limited permissions to shoot certain species.

“What Defra have done shows that Wild Justice were right,” said Avery, who is also a blogger and researcher. “It’s an admission that Defra have been asleep on the job and numbers of non-native game birds released into the countryside have increased year on year, and it takes a bunch of part-time nature conservationists to say you should be looking at this.

Avery said an essential first step was for the authorities to ensure the shooting industry accurately counted the number of game birds being released, with latest estimates putting the annual release of captive-bred pheasants and red-legged partridges at 57 million. The government must also examine the cumulative effects of these populations on and close to protected areas to reveal how wider biodiversity is affected, he said.

Defra said it “accepted in principle the annual release of non-native game birds, specifically the common pheasant and red-legged partridge, can be considered a ‘plan or project’ requiring appropriate assessment within the meaning of the habitats directive”.

Andrew Gilruth, the director of communications at Game and Wildlife Conservation Trust, said: “It is already the case that you can only release game birds, on land listed by the EU, with permission from the government conservation agency Natural England.

“Ground-nesting birds may welcome this challenge because, unlike shooting, no such assessment is made of those walking dogs, running or mountain biking during the breeding season.”

This article was first published by The Guardian on 12 September 2019.