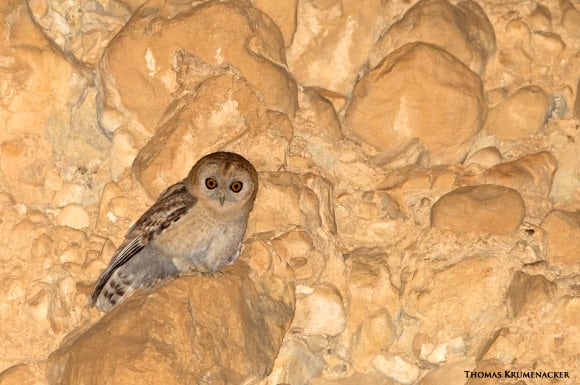 A group of ornithologists led by Dr Manuel Schweizer from the Natural History Museum of Bern in Switzerland has described a new cryptic species of owl that inhabits the desert areas of Israel, Egypt, Saudi Arabia, Jordan, Oman and Yemen.

It is a medium-sized owl, 30 to 33 centimeters long, and weighing 140 to 220 grams. It resembles the Hume’s Owl (Strix butleri) and the Tawny Owl (Strix aluco) in plumage pattern and proportions.

“It is a special pleasure to name this bird for Hadoram Shirihai, a much-valued colleague and collaborator for 20 years,” Dr Schweizer and his colleagues wrote in a paper in the journal Zootaxa.

“Although Hadoram’s ornithological interests are staggeringly wide-ranging, his name is arguably particularly synonymous with this wonderful owl of wild places in the Middle East. He discovered, when still a young boy, a live but poisoned specimen (of the Desert Tawny Owl) in En Gedi, which became the first individual to be held in captivity and is now a skeleton in the Tel Aviv University Museum.”

The bird lives in the Eastern Desert of Egypt, from Wadi Rabdeit, close to the border with Sudan, north to Mons Porphyrites, northwest of the port of Hurghada, as well as the Sinai Desert, e.g. around St Katherine’s Monastery, through southern and eastern Israel, in the Negev and Judean Deserts, to Jordan, where apparently confined to the eastern fringe of the Jordan Valley and the Rum Desert in the southeast of the country, thence south across western and, more locally, northern, central and northeastern Saudi Arabia, apparently throughout Yemen, and east to southwest Omani Dhofar.

“Strix hadorami occurs in rocky desert areas with ravines, cliffs and small caves, particularly in deep wadis with crevices for nesting and roosting and some vegetation. It is most frequent in limestone cliffs, but also occurs in granitic and basaltic regions of Saudi Arabia, and sandstone regions of Jordan,” the scientists wrote.

Analysis of pellets in Israel reveals that the diet of the bird mostly comprises rodents and small insectivores (gerbils, jirds, mice and shrews), geckos, some passerine birds, and arthropods such as scorpions, grasshoppers and beetles.

The breeding season is March-August in Israel, but earlier in southern Oman, where pairs generally cease vocalizing as early as March.

“Egg-laying in Arabia is estimated to occur from early February to late April,” the scientists wrote.

“Nesting data are scant: just one pair has been studied in detail in Israel, a total of five eggs was laid between 6 and 14 May, with an incubation period of 34–39 days; eggs hatched on 10-21 June and the fledging period was 30–40 days; another clutch, in eastern Saudi Arabia, numbered three fresh eggs on 25 February.”

The Arabian population has been estimated at about 3,000 pairs and in Israel there were about 200 pairs in the late 1980s.

Recent surveys in Israel suggest a decline, with some former territories occupied now by the Pharaoh Eagle-Owl (Bubo ascalaphus).

This article was first published by Sci-News.com on 25 Jan 2015.