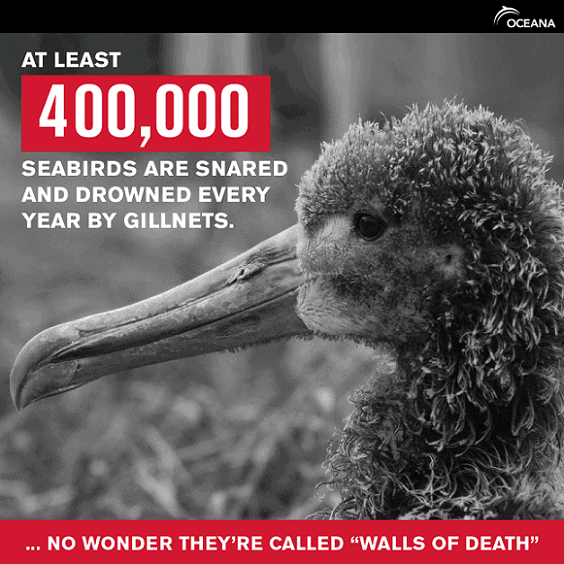 “Walls of death.” Gillnets have often been described in this haunting way due to their devastating ability to catch all kinds of fish, as well as sea turtles, seals, dolphins, and even whales. Marine creatures of all sizes and species are indiscriminately snared and drowned in these death traps, and a recent report reveals that even birds are being killed by these sea nets. A study in the journal Biological Conservation reported that fishing vessels that deploy gillnets snare and drown at least 400,000 sea birds around the world every year. The actual figure could be even higher.

The New York Times explains that the study uncovered reports of 81 different species of birds killed by gillnets, “including penguins, ducks and some critically endangered ones like the waved albatross.” One of the three authors of the report, Cleo Small, considered the 400,000 statistic to be a “bare minimum,” stating that data on the deaths were either nonexistent or too outdated to be useful in many areas.

Gillnets are mesh nets that dangle with a float along the top and weights at the bottom.Anchored in the water by weights and buoys, or unanchored and drifting wherever the current might take them, gillnets are nearly invisible to seabirds diving for fish. In the past, birds were able to see the nets from above and avoid them, but modern nets made of monofilament are practically invisible to the diving seabirds they entangle and drown.

Other academic studies have estimated that a minimum of 160,000 additional birds are killed each year by another insidious fishing gear – longlines. Longlines, which dangle thousands of deadly hooks on fishing lines up to 50 miles long, are widely used in commercial fishing. Approximately 1.4 billion baited hooks are set inlonglinefisheriesevery year. Longlines and gillnets are quickly making seabirds a prime victim of bycatch — the unintended catch of non-target marine life during commercial fishing activities that often results in huge amounts of fish and marine wildlife being thrown back into the water, dead or dying.

Seabird populations are declining faster than other types of birds, and researchers believe that gillnets may be the primary culprit. As the New York Times reports, huge drifting gillnets were estimated to kill 500,000 birds annually before a United Nations moratorium on large driftnets took effect in 1992.

Reducing seabird deaths is difficult, though many fisheries in the U.S. have taken significant efforts to do so. California fishermen have sharply cut the death toll by banning gillnets in some shallow waters, though gillnets are still permitted throughout the majority of state waters. Fisheries in Alaska have employed innovative methods to reduce seabird mortality, such as attaching streamers onto longlines or weights onto the lines that prevent seabirds from easily diving for baited hooks. Other efforts, such as setting gillnets at night with lights and sonar-style “pingers” on them, have shown varying success in reducing seabird deaths. Many of the options available to reduce bycatch can be expensive and place an additional economic burden on local fishermen, who are major users of gillnets, according to George Wallace, a vice president at the American Bird Conservancy. However, reducing seabird bycatch is required under the U.S. National Plan of Action for seabirds, which also states that these birds must be protected as valuable indicators of overall ocean health. Fisheries managers and the fishing community must not shy away from doing what is smart for the oceans, even if it seems difficult.

Most fishermen do want to reduce bycatch if it is economically possible, Mr. Wallace said. “Fishermen want to catch fish,” he said. “That’s what they can sell. They don’t want to tie up their lines with seabirds and sea turtles.” Bycatch provides no benefit to the fishermen who toss these creatures back, injured or dead and is threatening the future of populations of fish, marine mammals, and seabirds around the world. Join Oceana in our fight to end the use of devastating fishing gear like drift gillnets in California, and to reduce all forms of bycatch across our oceans.