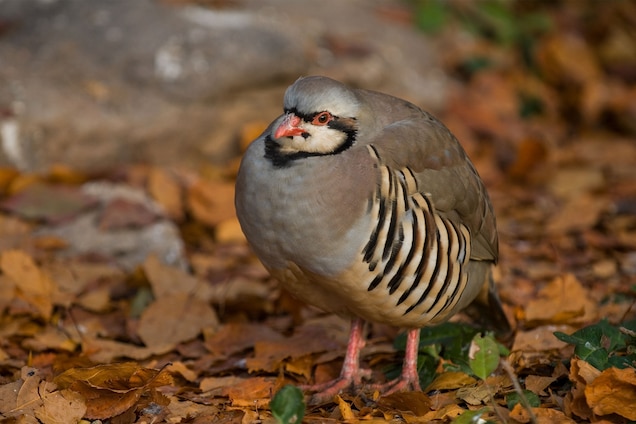 The lucky recipient in the classic Christmas carol “The Twelve Days of Christmas” got 23 birds over the course of the holiday season.

Hopefully they didn’t live in a studio apartment.

In the yuletide spirit, we’re taking a closer look at the birds immortalized in the English folk song, first published around 1780.

There are eight species of swans worldwide, and the most common species in England is the mute swan. The classy birds, inspirations for European fariytales, are popular exports and are often seen a-swimming in park lakes in North America.

Generally “swans mate for life,” and couples have an endearing “habit of swimming side-by-side,” says J.V. Remsen, curator of birds at the Louisiana State University Museum of Natural Science.

It’s unknown which geese the song refers to, although several species live in England, including pink-footed geese, barnacle geese, and Canada geese, a non-native species introduced from the U.S.

Geese eggs can provide quite a feast—the eggs of a wild Canada goose, for example, are more than three inches long, while a regular chicken egg is a little over two inches. Domestically a jumbo chicken egg weighs in at 2.5 ounces, while the egg of a Embden goose, a popular domestic breed, is nearly 6 ounces.

Noisy by nature, and with amazing eyesight and hearing, domestic geese have been trained to guard police stations in China.

Though most of us sing “four calling birds,” the correct word is actually “colly,” according to a 2016 blog post by the Library of Congress.

The word colly is an Old English adjective used to describe something black, like coal. So colly birds likely refer to blackbirds, according to the library. Twenty more and you’ve got a pie.

There is, however, a caveat for those of us in North America, Donald Kroodsma, retired ornithologist at the University of Massachusetts, Amherst, says via email.

“The blackbird of English literature is a close relative of our robin,” which are both part of the thrush family, Kroodsma says, whereas North American blackbirds are part of the icterid family.

And if you prefer calling birds, we asked Kroodsma, author of Listening to a Continent Sing: Birdsong By Bicycle From the Atlantic to the Pacific to choose a favorite.

“What’s sweeter than a cardinal song?” he says.

Most of the birds mentioned in the song are wild species, except for the French hen, “which is probably a breed of chicken and hence not wild,” says Kathi Borgmann, an ornithologist at the Cornell Lab of Ornithology.

The song may refer to the Favorelles chicken, a breed named for the region in France from which they originated in the late 1800s. These large, colorful birds have feathery ear muffs and beards—even the females have beards.

Must be hipster chicks.

The European turtle dove, a beautiful bird with pink and chestnut colors, is in no way related to turtles, quips Remsen.

Their scientific name is Streptopelia turtur—the latter of which means “turtle” in Latin. “So this is truly a curious situation.”

Some people believe their reptilian name comes from their call, which makes a “turr, turr” sound.

Possibly the most famous avian in the Christmas diddy is the partridge.

To most, a partridge probably brings to mind something like the plump little chukar, a partridge native to Eurasia and introduced to North America as a game bird.

There are 92 known species of partridges, which are relatives of quail and live in grasslands the world over.

Sadly, though, the birds are ground nesters, and not “likely to roost in pear trees,” says Michael Ward, avian ecologist at the University of Illinois.

Next thing they’ll be telling us reindeer don’t get air miles.

This article was first published by National Geographic on 23 Dec 2017. Lead Image: A chukar – a type of partridge – walks around the Riverside Zoo in Nebraska. Partridges are ground birds, and would not nest in pear trees. Photograph by Joel Sartore, National Geographic Creative.