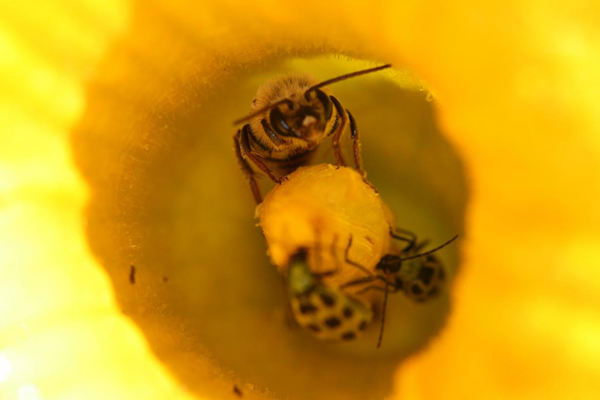 Sprinkled with pollen, buzzing bees fly from one blossom to another, collecting sweet nectar from brilliantly colored flowers. Bees tend to symbolize the pollination process, but there are many wild insects that carry out the same function. Unfortunately, wild insect populations are in decline, and, according to a recent study, adding more honey bees may not be a viable solution.

“All around the world people are looking for ways to make agricultural production more efficient,” said co-author Saul Cunningham, a researcher with the Commonwealth Scientific and Industrial Research Organization in Australia. Cunningham was one of fifty researchers from across the globe that contributed to the study published recently in Science.

“At the same time there is global concern that biodiversity loss is continuing at a dangerous rate,” Cunningham continued.

But as the number of adjacent habitats has declined, so has the abundance and diversity of the wild insects that once lived there, resulting in fewer crop visits. According to the study, the pollination of crop flowers by wild insects is a vulnerable service.

Honey bees have long been viewed as a substitute for vanishing wild pollinators. Some crops like almond, blueberry or watermelon are routinely stocked with a high number of bees to promote and improve pollination, a tradition that crosses continental boundaries. However, the idea of honey bees replacing abundant and diverse wild insects is not well understood.

“Our study challenges the widespread assumption that crop pollination services provided by wild insects can be replaced by a single domesticated species, the honey bee, without a loss in crop production,” said Rachael Winfree with Rutgers University in New Jersey, a contributing scientist to the study.

The researchers analyzed data from 600 fields, hitting every continent on which food is grown. The group observed 41 crop systems, ranging from annual and perennial fruits, seeds and nuts to stimulant crops like coffee. Some fields contained an assortment of crops while others were monocultures with only one crop.

The insect species and abundance were also diverse. Several crops were stocked with a high number of honey bees; others had a variety of wild insects. The researchers measured flower visitation for each species of insect and calculated pollen deposition.

“The results were impressive,” said Lucas Garibaldi with the Universidad Nacional de Río Negro in Argentina, lead researcher of the study. “We found that wild insects consistently enhanced the number of flowers setting fruits or seeds for a broad range of crops and agricultural practices on all continents with farmland.”

Based on the study’s findings, wild insects pollinated crops more effectively due to more visitations. In fields with a low number of wild insects the fruit set was also much lower.

Managed honey bees supplemented the pollination process, but did not take the place of the wild insects. In fact, relying on a single pollinator like the honey bee could be detrimental to the crops if pathogens, predators or pesticides ravage the insect population, which has been observed during the Colony Collapse Disorder of honey bees in the U.S. and Europe.

If wild insect pollinators continue to decline in agricultural landscapes, crop harvests may be negatively affected. The study suggests that farmers move to more sustainable management practices that include both honey bees and diverse wild insects, such as the conservation or restoration of neighboring natural habitats to promote natural pollinators.

This article was written by Lacey Avery and published by Mongabay.com