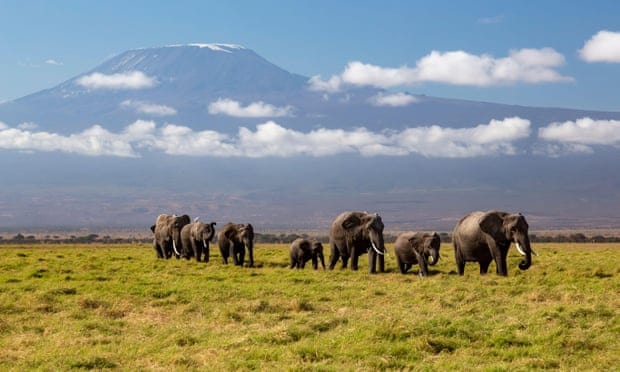 Kenyan elephants risk a slow extinction in a bleak, ever-shrinking “ecological island” in one of the country’s most picturesque and photographed landscapes, according to a government report.

The animals face a grim future as habitat loss is exacerbated by the pandemic’s impact on tourism, which is pushing landowners to sell off areas for development, and a growing trend towards a sedentary lifestyle among the pastoralist Maasai people, says the new 10-year management plan.

Increased and unregulated grazing in the Amboseli national park is destroying plant and animal diversity, aggravating conflicts between humans and wildlife and intensifying the negative effects of climate crisis with flooding and drought.

If nothing is done urgently to secure the ecosystem, the report says, the park risks becoming an “ecological island”, confining the 1,800 elephants that live there into a tight circle of five animals to each square kilometre as opposed to their basic survival threshold of one elephant to every square kilometre.

Amboseli includes the 39,200 hectare national park – one of the most photographed landscapes in Africa, where elephants and other wildlife are framed by the backdrop of Kilimanjaro – and seven group ranches belonging to the Maasai community that cover 506,329 hectares.

It is the constant subdivision of this land into smaller parcels and their possible change of use into commercial ventures that conservationists fear will lead to loss of wildlife dispersal areas and close corridors used by animals to visit adjacent conservation areas, such as Tsavo and Kilimanjaro.

“Isolation of the park from the rest of the ecosystem would have adverse impacts on wildlife populations and tourism in the area. If the park is isolated, there would be less wildlife species diversity, which would necessitate a reduction of elephant numbers, while 15% biomass potential of wildlife in the ranches could be lost,” says the management plan.

It is not just the elephants that face imminent danger. Four other inhabitants of Amboseli: the Maasai giraffe, lion, cheetah and hippo are on the International Union for Conservation of Nature (IUCN) Red List of threatened species. Amboseli is also one of the 62 important bird areas (IBAs) in Kenya and a member of Unesco’s global network of biosphere reserves. Of the 503 bird species recorded in the park, 17 are on IUCN’s Red List.

According to the management plan, elephants in Amboseli act to balance the larger ecosystem, boosting the survival of diverse species. For example, the elephants have traditionally used a southern corridor to connect with others on the northern slopes of Kilimanjaro. But it is closing fast as commercial farming increases, with the report warning of “imminent extinction of species”.

“Connecting Amboseli national park and Kilimanjaro forest on the Tanzanian side is a narrow strip of land, the Kitenden Corridor, which allows wildlife movement, and particularly elephant movement, between the two protected areas. The Amboseli populations may act as an important gene pool, particularly for the small population of eland in the moorland and alpine zones of Kilimanjaro, which might be prone to natural extinction if passage through the corridor is blocked,” says the plan.

Jackson Mwato is the executive director of the Amboseli Ecosystem Trust, an umbrella body which is championing the cause of more than 27,000 landowners, but with an eye on sustainability. In February, Mwato brought together conservation officials and landowners to discuss the development of an action plan, a measure they hope will lead to the survival of the wildlife animals and improve Maasai livelihoods.

“These people are central to the survival of the Amboseli ecosystem,” Mwato told the Guardian. “They have grazed their cattle in the midst of wildlife in land that was collectively owned for decades. Now they are subdividing the land and getting individual land ownership documents. What happens next will make or break conservation.”

Mwato says that for local people to benefit economically from the land, a programme where specific blocks are earmarked for grazing, conservation and tourism, cultivation, human settlement and other forms of infrastructure needs to be in place. However, for some owners the money has been too tempting and they’ve opted to lease their newly registered land to big commercial enterprises from outside the area.

Driving along the dirt road leading to Amboseli national park, giraffes forage on acacia shrubs while a herd of impalas rests in the shade beneath. A lone zebra stands motionless, oblivious to the whistling of a Maasai boy herding cattle into nearby lush pasture grounds. This illustrates the harmonies of life in Amboseli. On the opposite side of the road is a fenced farm – about 1,000 acres – where dozens of employees are hard at work sorting horticultural produce for the export market. Refrigerated trucks taking fresh produce from here to the airport in Nairobi, 240km away, are now more common than the tourist vehicles that used to throng the area before Covid. For local Maasai who feel they benefited little from the proceeds of tourism despite the wildlife on their land, leasing land to such businesses seems a viable option.

“Such landowners feel that leasing their newly registered parcels of land to investors makes sense. For example, a person with 60 acres in a wildlife conservancy might earn 30,000 Kenyan shillings (£200) a year in lease fees. In the current situation where there is only a trickle of tourists due to coronavirus, even that amount may not be guaranteed. But in comparison, leasing out the land for commercial farming brings the same amount of money per acre. That is why some will opt to lease out their land for such activities,” says Mwato.

Still, conservationists feel that if land subdivision is handled well, it can breathe some life into the endangered ecosystem. Evan Mkala, the International Fund for Animal Welfare’s (IFAW) programme manager for the region says: “The Maasai have always opened up their land to wildlife despite the amorphous group ranch arrangement. With direct ownership of the land, they have legal authority to set up wildlife conservancies, create proper governance structures and lay the groundwork for community infrastructure development.”

Since 2010, IFAW has been signing land lease agreements with pastoralists to safeguard a wildlife corridor between Amboseli and Kilimanjaro. Mwato and his team at Amboseli Ecosystem Trust hope that more landowners will embrace the conservancy model and save the fragile ecosystem.

“No tourism investor will come when all the space for wildlife has been converted to agriculture,” says Mwato. But what if more of Amboseli is turned over to agriculture? “We can say goodbye to conservation. We will have to describe how an elephant used to look to our future generations.”

This article was first published by The Guardian on 11 March 2021. Lead Image: The 1,800 elephants of Amboseli national park are being forced to live in a smaller and smaller area. Photograph: Ronald S Phillips/Alamy.