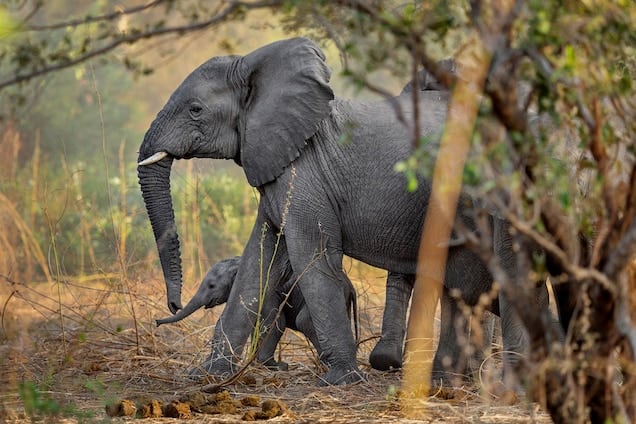 A routine aerial surveillance flight over the western part of Chad’s Zakouma National Park has uncovered the deaths of two female elephants and their calves in what officials say is the first poaching incident there in more than three years.

The loss of any elephants in Zakouma, a 1,158-square-mile preserve in southern Chad not far from the border with Sudan and the Central African Republic, is particularly worrying because the park’s population—ravaged by poaching in the first decade of the 2000s, when the numbers fell from about 4,000 in 2006 to some 450 today—had finally stabilized.

After more than four years with almost no births—a sure sign of herd stress—babies are again being born in Zakouma, as Bryan Christy and photographer Brent Stirton highlighted in the September 2015 cover story of National Geographic.

The incident came to light on August 11, when a pilot doing a routine surveillance flight chanced upon a herd of 30 elephants, massed in a defensive position, and spotted two men and their horses nearby.

According to African Parks, the organization that manages the park with the Chadian government, an anti-poaching patrol of park rangers was sent to the area immediately.

By the time the team arrived, the men had vanished, leaving behind the carcasses of two adult females, one with her tusks removed.

Two calves, orphaned by the killings, were nearby. The patrol flew the younger one, likely less than two months old, to park headquarters. Staff hand-fed the baby, but the trauma apparently was too great, and he died.

The other calf had moved off before it could be rescued and is presumed to have died, being still too young to survive on its own.

Efforts to find the poachers are continuing, but heavy rain and rough terrain in the western part of the park are hampering the operation.

Zakouma’s elephants tend to use this area briefly every wet season. It could be that the poachers either knew and took advantage of this or were there to hunt bush meat, with ivory a side attraction.

“Bush meat hunting and trading is not common around Zakouma,” says park manager Rian Labuschagne. “Individuals doing this business usually stand out in the communities, so we hope to still find more clues which can lead to their arrest.”

African Parks is reaching out to surrounding villages and has offered a reward for information leading to arrests. So far, the hottest trail is to the south, where a gang with four horses was seen trading buffalo meat in a village.

In the National Geographic story, writer Christy noted that during the height of the Zakouma killings, large groups of Sudanese poachers camped inside the park for months at a time.

That shifted in 2008 with the introduction of a surveillance plane. As poachers adapted, introducing smaller squads and one-day hunts from outside the park, enforcement also intensified.

Zakouma seemed a bright star in the constellation of African parks: It hadn’t lost a single elephant since 2012—until now.

While Sudan has become what Christy calls an elephant poaching “super state,” evidence in this instance points to a local Chadian gang.

Rangers determined the poachers used an AK 47 and ammunition of Russian and Chinese origin. The casings came from different batches, which likely means they bought them piecemeal from Chadian military personnel.

In contrast, ammunition used by Sudanese poachers can usually be traced to factories in Sudan or Iran.

This incident, Labuschagne notes, “shows a hole in our system that should be plugged, and we will take immediate actions to do so.”

According to Labuschagne, smaller gangs are harder to detect but also devastating to the elephants.

To achieve the goal of increasing Zakouma’s herd to more than a thousand, Labuschagne says, “We always have to remain one step ahead of the poacher.”

But, as Christy notes, “as long as foreign demand for ivory continues, no elephant population is safe, even populations as remote and well-protected as Zakouma’s.”

This article was first published by National Geographic on 01 Aug 2015. Lead Image: Rampant poaching in Chad’s Zakouma park put its elephants under such stress that they stopped breeding. But with beefed up security, and no poaching deaths since 2012, more than 40 calves have been born. Last month, poachers killed the mothers of two of those babies. One was rescued but died; the other wasn’t found and is presumed dead. Photography by Brent Stirton, National Geographic.