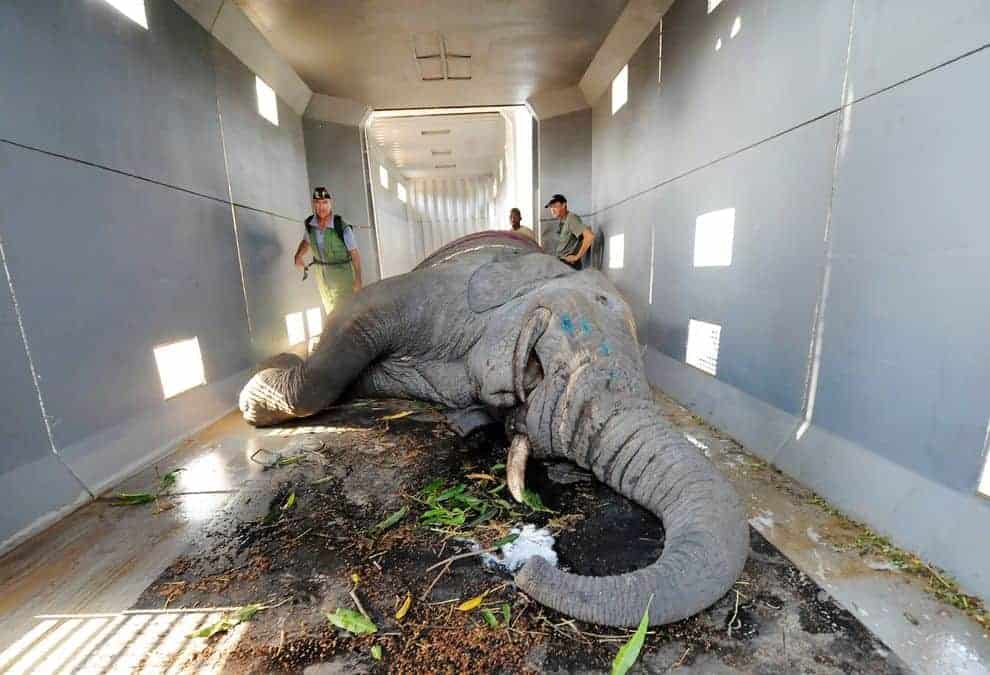 The challenging relocation was conducted to relieve growing conflict between the large animals and villagers in Daloa, a town near the elephants’ home in Marahoue National Park.

Four of the elephants made it, two of the rare mammals died—a loss that’s high but “not surprising” for this type of risky operation, said Joyce Poole, co-founder of the conservation group ElephantVoices.

Not only is it hard to move one of the largest animals in the world, it’s also difficult to find the notoriously shy African forest elephant (Loxodonta cyclotis), which was recently recognized as a distinct subspecies of African elephant (Loxodonta africana).

One of the rarest subspecies on the continent, there are an estimated 60,000 to 150,000 African forest elephants left in the wild, according to Cornell University. The International Union for Conservation of Nature lists the species as vulnerable.

Translocating elephants [as a] solution is only used as last resort—the operation is risky and very expensive –  Céline Sissler-Bienvenu, Director, IFAW

“Instead of killing these elephants, which are the country’s national emblem, they wanted to find a humane solution, and knew we had moved elephants in Malawi before,” said Sissler-Bienvenu.

Deforestation in Marahoue National Park is one reason that conflicts escalated between elephants and humans. According to Sissler-Bienvenu, an estimated 80 percent of the park has been converted to agriculture since the Ivorian Civil War began in 2002.

Without homes or food, the restless and hungry elephants began to roam, becoming dangerous neighbors for the residents of Daloa and other surrounding villages: The animals have stomped three people to death and eaten much of the local crops. (Listen to an interview about living with lions in the Serengeti.)

When villagers threatened to kill the encroaching species, the Ivory Coast government intervened in April 2012, asking the IFAW to help resolve the conflict.

So, to protect the pachyderms, the IFAW translocated four males, tranquilizing them and transporting them in trucks about 310 miles (500 kilometers) from Daloa to Asagny National Park, a federal wildlife reserve that consists of 19,400 hectares (47,938 acres) of forest and wetlands along the Gulf of Guinea.

The reserve is protected on three sides by natural borders such as rivers and oceans, which should significantly limit the elephants from wandering and help prevent interaction with humans.

“These elephants are shy and usually try to escape from humans. I don’t think they will try to go back to the contact of human beings,” said Sissler-Bienvenu.

Of the estimated 12 elephants in the area, a predominantly male herd, the IFAW captured six and successfully translocated four.

One elephant died when it drowned after it was tranquilized and fell into a swamp near Daloa, and the second passed away from a heart attack.

The IFAW staff was shocked and saddened by the deaths, Sissler-Bienvenu said on her blog.

If translocating the elephant was not an option, the elephant would become yet another fallen victim of human-elephant conflict. Céline Sissler-Bienvenu, Director, IFAW

“Even with all of our protocols that have been scrupulously followed, even having the best translocation professionals in the business, we know that the risk of losing an elephant exists,” she wrote.

“If this elephant were to stay in Daloa, if the alternative of translocating the elephant were not an option, he would soon become yet another fallen victim of human-elephant conflict.”

Poole, who is also a National Geographic grantee, agreed: “The loss on this operation was very high, but it was probably due to very difficult circumstances.” She explained that immobilizing an elephant is extremely difficult, and even more so in thick vegetation.

The IFAW, which has been involved in numerous elephant translocations in southern and eastern Africa, is “known for putting the animal’s welfare first, and I’m sure they did everything possible to avoid a situation like this,” Poole said.

According to the IFAW, Ivory Coast government officials monitored the death of the elephants and handled the disposal of the bodies.

How to Move an Elephant

The translocation project took more than 18 months to plan and ten days to implement.

The first obstacle, and arguably the most challenging, was finding the animals. Villagers provided tips on where to find them, and then the team used a helicopter to locate the animals.

After an elephant was found, it was tranquilized by dart, either from the ground or the helicopter.

It’s safer to dart elephants from a helicopter because there’s less threat of being chased by a startled elephant. “Which did happen on occasion,” said Sissler-Bienvenu.

While the tranquilizer took effect, in about five to ten minutes, the team followed the drowsy elephant. “During this process, we paid particular attention to where he fell asleep. If it was a dense forest area, we had to clear some of the vegetation for the trucks to have access to the elephant,” said Sissler-Bienvenu.

Once the area was clear, they used a crane to lift the elephant onto a truck. The truck delivered the elephant to a platform where it could mosey out of its sleepy stupor and into the transport crate.

Then came the easy part. According to Sissler-Bienvenu, when groggy elephants wake up, they naturally walk backward rather than forward. So the team placed the cage behind the animal, using “that natural instinct to our advantage.”

The transport crate containing the elephant was then loaded onto a truck for the 10- to 13-hour drive on dirt roads to Asagny National Park.

After the team spent hours capturing and loading the elephants onto trucks, they were excited to release the animals into the wild.

“The release was an emotional moment for us, but a fast one,” said Sissler-Bienvenu. After the crates’ doors were opened, it took only five minutes for the elephants to stride away into their new terrain.

“It was a long trip for the elephants. We were usually stuck in the mud for hours at a time. They were very happy to go out,” explained Sissler-Bienvenu.

The physical transportation of the elephants to Asagny National Park ended here, but their journeys do not. According to Gail A’Brunzo, the IFAW’s wildlife-rescue manager, the elephants now have to adjust to their new habitat.

The team placed tracking equipment on the elephants to monitor their behavior over the next few months.

“I personally feel,” added Sissler-Bienvenu, “we have completed the impossible.”

This article was written by Angie McPherson for National Geographic.