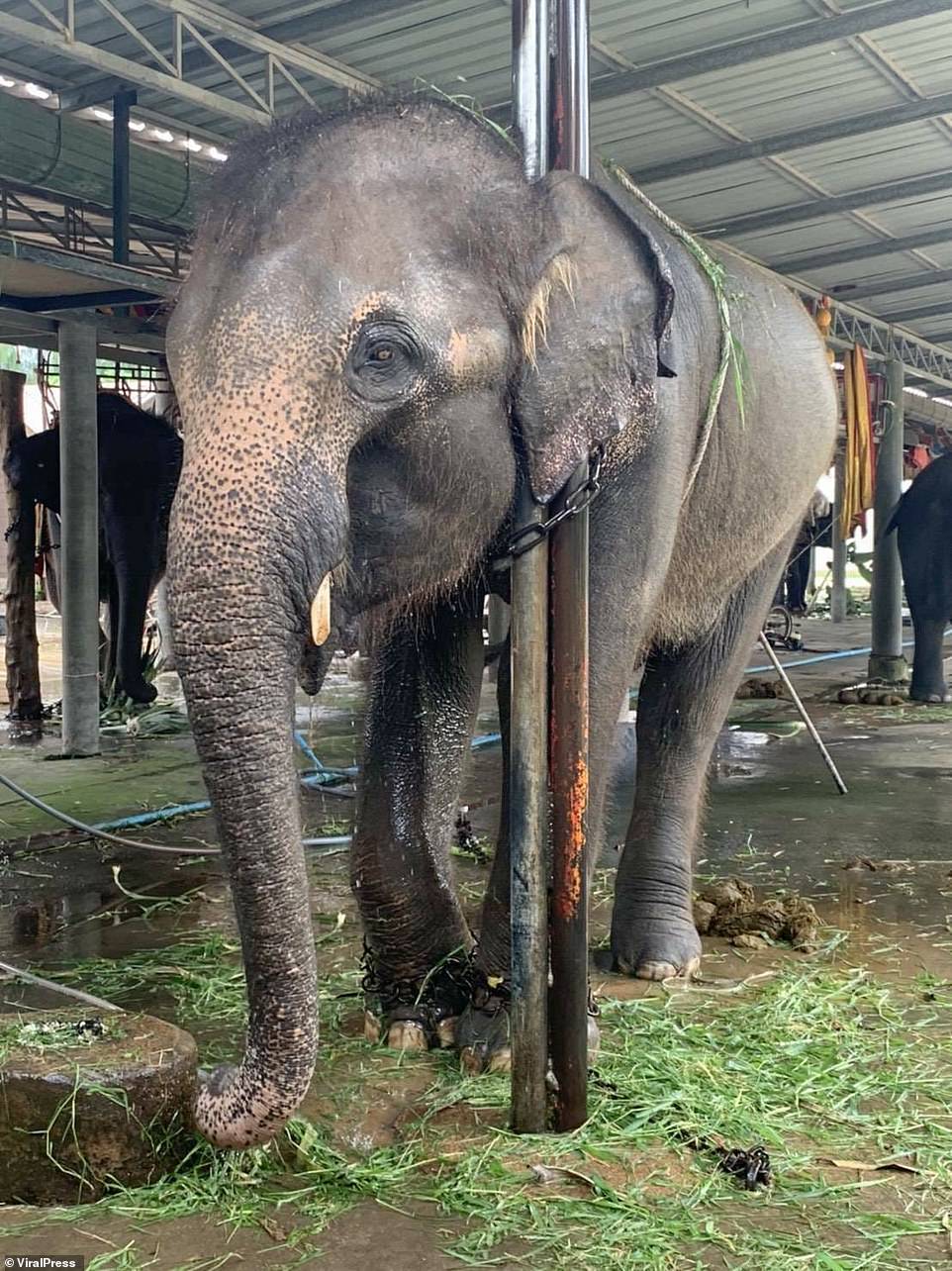 Exhausted elephants believed to be so weak that they were held up by chains around their necks have been discovered at an animal camp in Thailand.

The emaciated jumbos were discovered by outraged tourists visiting Chang Puak Camp, which offers elephant rides and shows, in Ratchaburi province on June 15.

The three elephants – Plai See Dor Thong Pool, 15, Plai Boon Mee, 15, and Plai Kham Kaew, 45 – were reportedly so weak they had to be held up by chains around their necks.

Harrowing video footage and pictures showed the thin elephants slumped over the metal poles as they struggled to stand up and were unable to move freely.

The animals are believed to have been suffering from neglect after the Covid-19 pandemic killed international tourism in Thailand – decimating up to 20 per cent of the country’s GDP.

But the elephants were finally found on June 18 by officers from the Department of Livestock Development (DLD) after the animal camp was reported to authorities.

The elephants were unchained and taken away to be checked, before they were returned to the animal camp, where they remain now.

A DLD spokesman said: ‘We visited the camp after receiving reports to confirm and saw the animals tied using chains. We are now investigating the mahouts why they had to do that.

‘We have also warned them not to repeat it or they could be charged with violation of our animal protection laws.’

Authai Saetang, regional officer from the Department of Livestock Development (DLD), added: ‘The team visited the elephant camp on June 18 and removed the chains from three elephants. They were checked by our vet and then returned to the owner.

‘An official warning was made and he agreed not to keep the animals in that condition. We will check again in the future and if the elephants are being neglected he will be prosecuted and the elephants will be confiscated.’

Camp official and mahout Thavorn Parnkaew apologised after the incident and denied that they were being cruel to the animals.

He insisted that the elephants had been chained up due to ‘safety concerns’ and added that he will tell the mahouts not to tie the animals by their necks anymore.

The elephant trainer continued: ‘Many of our mahouts were laid off because of the Covid-19.

‘The camp could not shoulder the cost of paying them while sustaining food for the elephants so we had to retrench some of them.

‘We now face a shortage of mahouts to take care of the elephants so we had to chain them for safety concerns. We always take good care of them like our family.

‘We apologise and will instruct all of our mahouts at the camp not to tie the elephants by their necks again. We hope for everyone’s understanding.’

Animal rights groups, including People for the Ethical Treatment of Animals (PETA), have campaigned for the country to ban the use of elephants in the tourist industry.

The organisation’s Asia boss Jason Barker said: ‘Elephant camps, which have profited from elephant suffering for decades, should rehome elephants at reputable sanctuaries like BLES immediately before they die from neglect and starvation.

‘Elephants like this emaciated one are living a life of torment for Thailand’s ‘entertainment’ industry. The COVID-19 pandemic is a chance for any facility that exploits elephants and other animals for profit to reflect on what the future holds.

‘There is a growing recognition that elephant rides, forcing elephants to perform other ‘tricks’, and keeping them captive for profit is ethically indefensible.

‘PETA urges everyone who genuinely cares about elephants to never support any facility that exploits these majestic animals and instead donate to campaigns that actually protect elephants in their native habitats.’

In February, rescuers battled to save a starving elephant that was found ‘days from death’ after it was neglected at a Thai tourist camp closed by coronavirus.

The male jumbo named Khun Pan, 50, had been working at the Chang Siam Park in Chonburi, eastern Thailand, giving rides to tourists until the Covid-19 pandemic hit, with holidaymakers banned from visiting.

Tragically, the elephant was left to starve – becoming so thin that his bones were protruding from his skin.

Khun Pan was found covered in sores from where he had been laying on hard, dusty ground, while his long ivory tusks had started to weaken and crack.

Medics from an animal hospital in nearby Pattaya arrived at the Chang Siam Park and found the elephant was too weak to stand on its own as it was just a few days from death.

They had to hoist the elephant up with leather straps which was attached to a nearby tree to help it stand. The medics gave an IV drip with saline solution to rehydrate the jumbo.

An estimated 2,000 elephants are living in the wild in Thailand and a similar number in captivity, where they live in sanctuaries, zoos or work privately for hire at weddings and festivals.

Restrictions on travel due to the Covid-19 pandemic have meant that elephants in Thailand’s tourism industry have suffered, with many sanctuaries and camps that use them struggling to pay for their upkeep.

In the wild, they roam through the deep jungle and in the country’s protected national parks but often encounter humans on roads and in villages.

The national animal are protected by laws and killing them carries a maximum prison term of up to three years and a fine of 1,000 baht (25GBP).

This article by Kate Dennett was first published by The Daily Mail on 22 June 2021. Lead Image: Exhausted jumbos were found chained to poles by their necks (pictured) by tourists visiting Chang Puak Camp, which offers elephant rides and shows, in Ratchaburi province on June 15.