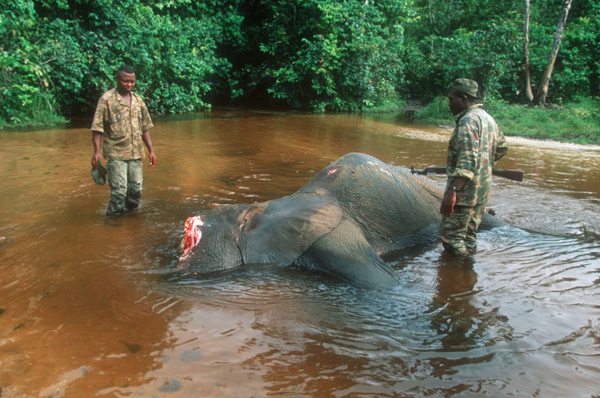 WWF and the Wildlife Conversation Society (WCS) are issuing an immediate call for action as they report that poachers are killing sizable numbers of forest elephants near the Dzanga-Sangha protected areas in the Central African Republic (CAR). The two large conservation groups have evacuated their staff from the area after a government coup, but local rangers are still trying to determine the scale of the killing while defending remaining elephants. In total the conservation groups believe the parks are home to over 3,000 elephants.

“The elephant poaching crisis—driven by insatiable ivory demand—is so severe that no area is safe, not even the World Heritage Site Dzanga-Sangha where both WWF and WCS have now worked for the conservation of elephants for decades,” Jim Leape, WWF Director General said. “Heroic rangers are standing firm in the face of immense danger, but they alone cannot safeguard the special species and places the world treasures.”

The crisis is believed to have been kick-started by the ousting of long-time president, François Bozize. Poachers appear to be taking advantage of the resulting governmental chaos, while the Associated Press reports that the rebels may be connected to the elephants poachers.

Although the conversation groups don’t know yet how many elephants have been killed, according to a press release they believe the number “may be extensive.” Patrols through the forest have stopped due to instability, and the groups report that elephant meat is being sold in the area openly.

“Given the total absence of any type of law enforcement and rule of law in the area, there is elephant meat all over the place,” Bas Huijbregts, WWF policy head against poaching in Central Africa, told the AP.

WWF and WCS have jointly called on the Central African Republic (CAR) government and neighboring states for increased security in the region not just for the elephants, but to protect locals from worsening lawlessness and conflict.

The slaughter of elephants for their ivory has escalated in recent years as demand for ivory has shot-up in East Asia. Estimates predict that some 30,000 elephants are being killed annually for their tusks. Forest elephants have taken the brunt of the illegal trade. A recent study found that poachers, working in increasingly sophisticated networks with heavy gunnery, have killed an astounding 62 percent of the world’s forest elephants in the last ten years. According to some scientists, forest elephants (Loxodonta cyclotis) are a distinct species from the more well-known bush elephant.

To deal with the continent-wide elephant crisis, governments are meeting next week to discuss ways to stem the killing.

“When meeting next week, Central African governments must urgently join forces against this criminal activity that is also threatening the stability and economic development of their countries,” says Leape. “I encourage them in the strongest terms to take a stand against wildlife crime and together declare that poaching and illicit trafficking will not be tolerated.”