A mysterious disease is wiping out one of the world’s smallest bats, the aptly named “little brown bat,” which has an extensive range across the United States and Canada. But these tiny mammals, which are classified as an endangered species by the IUCN and Canada’s Species at Risk Act, are turning out to be more tenacious than previously thought. New research shows that little brown bats (Myotis lucifugus) could be fighting off the disease through genetic resistance.

The disease, white-nose syndrome, comes from a fungus called Pseudogymnoascus destructans, often abbreviated to Pd. This pathogen is believed to have originated in Asia or Europe, although researchers haven’t been able to pinpoint a specific source. It was first detected in Albany, New York, in 2006, and since then, it’s spread across North America — from southern Texas to the western seaboard of Newfoundland — killing millions of bats in the process. Some experts refer to white-nose syndrome as one of the deadliest wildlife diseases in modern times.

Pd grows in cool, moist places, such as caves, which are exactly the environments in which little brown bats and other bat species like to hibernate.

“When bats hibernate, their body temperature drops so low that they’re basically the same temperature as the cave surface,” Giorgia Auteri, Ph.D. candidate at the University of Michigan, told Mongabay. “So the fungus grows on them.

It’s growing on their noses and on their wings, and it’s possibly inhibiting their breathing a little bit since it’s going over their face.

They wake up to clean it off when they’re supposed to be in a sustained deep hibernation, and every time they do wake up, it takes up a pretty big portion of their winter energy budget. From all of these arousals, they run out of fat reserves too early before the winter ends.”

The syndrome gets its name from the visible white fuzz that often develops on a bat’s nose and wings.

However, the fungus isn’t always detectable on an infected bat, and researchers sometimes need a microscope to identify Pd on a bat’s skin.

This debilitating disease doesn’t just affect little brown bats. In North America alone, 12 additional bat species, including the gray bat (Myotis grisescens), Indiana bat (Myotis sodalis) and northern long-eared bat (Myotis septentrionalis), have been infected with white-nose syndrome, according to an informationalsiteproduced by the U.S. Fish and Wildlife Service. Pd has also been detected in a further eight species, although these bats haven’t shown any symptoms of white-nosed syndrome. Numerous bat species in Europe and Asia are also being decimated by the fungus.

In a recent paper in Scientific Reports, Auteri and her co-author, L. Lacey Knowles, draw from previous studies to note the little brown bat population has declined by more than 90% due to white-nose syndrome.

Gregory Turner, a biologist at the Pennsylvania Game Commission, says he has also seen a sharp decline in bat species since the onset of the disease.

“My state saw an overall 98% decline for all 6 species we have here that hibernate, with 2 that exceeded 99%,” Turner told Mongabay in an email. “Those were the two most abundant and ubiquitous species at that time.”

In a report published in Science in 2010, Turner and his colleagues predicted that the little brown bat would experience a “rapid regional extinction,” despite being one of the most widespread bat species in North America. While no bat species have yet gone extinct from white-nose syndrome, Turner says the danger is still imminent.

“While mortality has ameliorated since its arrival, remaining population levels are very small for some of these species, and so any additional stresses or threats could be catastrophic until some recovery occurs,” Turner said.

If species like the little brown bat disappear from North America, local ecosystems could be thrown out of balance. Bats act as pollinators and seed dispersers, and also help with pest control, according to Auteri.

“Little brown bats are insectivores, so they exclusively eat insects,” Auteri said. “And since they are a smaller species, their diet is a lot of smaller flying insects like flies and mosquitoes.”

In their new paper, Auteri and Knowles offer a glimmer of hope: little brown bats were found to have significant differences in at least three genes, and certain individuals appeared to have the ability to fight off the disease due to these gene variations. Bats that survived white-nose syndrome due to genetic resistance should pass on their genes to their offspring, Auteri said, which can theoretically strengthen the population.

The team got their data by going into mines and natural caves in Michigan, and collecting tissue samples from deceased bats.

“We went and looked for bats that we could identify as adult little brown bats, so we knew that they had survived at least one winter while hibernating in this area where the disease was all over the place,” Auteri said.

In the summer, they also collected DNA from living bats by catching them in thin nets, extracting small tissue samples from their back wings, and then letting them go. 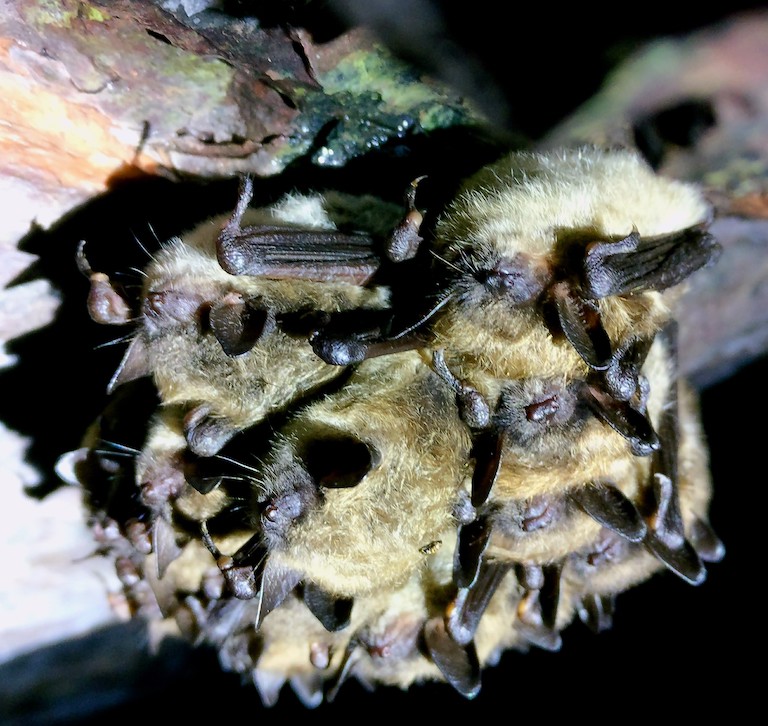 While previous studies have suggested that bats could be surviving white-nose syndrome through genetics, this is the first study that uses genetics to find a direct correlation between genes and survival, Auteri said.

“[W]e’re finding the hint that there could be these genetic changes that are occurring that might provide some type of survival in the future,” Knowles, a professor at the University of Michigan, said in a statement. “So as these variants increase, there’s some hope that these bats are not all going to die from the disease itself.”

“Eventually the population might be able to survive on their own without a lot of human intervention, and that helps inform the tempo and pace of conservation decisions,” Auteri said. “There are a lot of people and nonprofits … working to protect the species and put up bat boxes, and there’s even people working on developing vaccines for the disease to be administered to wild bats. So this research that there are genetically resistant individuals helps to inform those efforts.”

According to Turner, bats are also changing their behavior, perhaps in response to white-nose syndrome, which may improve their chances of survival.

“These colder temperatures likely help the bats save energy by lengthening the amount of time they stay in torpor (reducing the number of times each winter they exit torpor and spend energy on warming their body), and thus not running out of stored energy reserves as quickly,” Turner said. “So, with some changes on their end, and a few management techniques we are working on currently that I hope have promise, I do have hope that these species will persist.”

This article by Elizabeth Claire Alberts was first published on Mongabay.com on 14 May 2020.