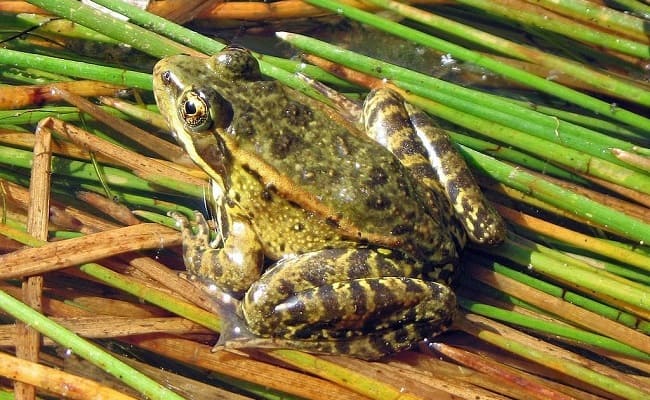 After losing their homes last fall during the devastating Camp Fire that destroyed most of the town of Paradise, Calif., many residents are anxious to rebuild.

Hundreds of them, however, will have to wait. About 800 properties are located near a waterway that’s the home of endangered frogs and other species. Before clean-up efforts can begin, state and federal officials must make sure the work doesn’t cause harm to the environment and wildlife.

Many people aren’t happy about the delay. The situation is “truly absurd,” California Sen. Jim Nielsen (R-Tehama) wrote on Twitter. “Survivors and rebuilding efforts must have priority over frogs.”

But isn’t it just as absurd to be upset over this temporary hurdle, especially since the frogs and other wildlife made this area their home long before those houses were originally built? It may be easy for Nielsen to dismiss them since they’re frogs, but they’re a vital part of the ecosystem.

Among other benefits, frogs eat insects that destroy crops and transmit diseases, like West Nile Virus. They’re also a food source for birds, snakes and other animals. The disappearance of frogs could “disturb an intricate food web with cascading effects felt throughout an entire ecosystem,” warned biologist Maureen Donnelly.

Among the species that inhabit this area of Paradise are the endangered California red-legged frog, foothill yellow-legged frog and Western pond turtle, along with several bird, bat and fish species, according to a list provided by the California Department of Fish and Wildlife (CDFW), the Sacramento Bee reports.

California red-legged frogs are the largest native frog in the Western United States. This species is famous for being the subject of the classic Mark Twain short story, “The Celebrated Jumping Frog of Calaveras County.” But they’ve now lost 70 percent of their former habitat in Calaveras and other California counties. Potential threats to these frogs, according to the U.S. Fish and Wildlife Service (FWS), “include elimination or degradation of habitat from land development.”

Foothill yellow-legged frogs could also once be found in streams and rivers from Oregon to Southern California, but due to factors like urbanization, climate change and pesticide use, they’ve disappeared from their southernmost habitats and are also in decline in Northern California.

“Protecting these frogs will also benefit other wildlife and many river and stream ecosystems in California that we already love and rely on for recreation, open space and drinking water,” said the Center for Biological Diversity’s Jenny Loda in 2017, after the organization successfully petitioned the California Fish and Game Commission to advance these frogs as a candidate species under the California Endangered Species Act.

To protect these and other species, California’s Fish and Game Code prohibits clean-up crews from altering streams or waterways, using any materials from waterways and disposing any debris in a manner that could make it end up in waterways.

Several agencies, including the CDFW, FWS, National Oceanic and Atmospheric Administration, and CalRecycle are working together on a protocol to safely deal with the environmental concerns in Paradise, California Office of Emergency Services (Cal OES) spokesman Eric Lamoureux told the Sacramento Bee. As of May 10, he said the plans were close to being finalized.

“We are trying to balance the need to get these properties cleared as quickly as possible but also protecting our environment out there,” Lamoureux said. Elsewhere in Paradise, 141 debris removal crews are clearing over 100 properties each day.

It’s understandable that survivors of the worst wildfire in California history want to start rebuilding their homes—and lives—as quickly as possible. But as for the vulnerable frogs whose lives could be impacted in this process, once they’re gone, they’re gone for good, with no chance to start over. Here’s hoping a protocol is soon finalized that leads to a safe, peaceful co-existence for all species involved.