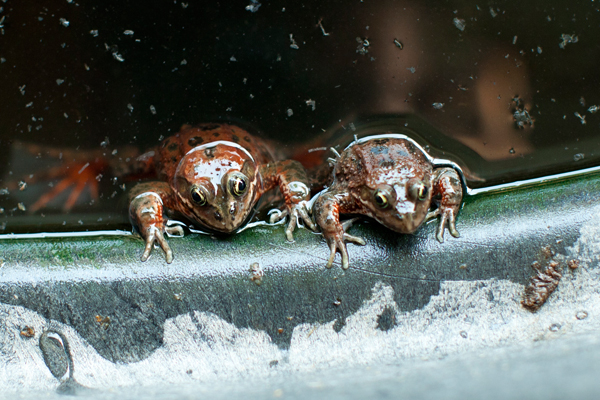 Perhaps it does not seem cause for celebration that the Oregon spotted frog, a four-inch-long amphibian that prefers the Pacific Northwest’s dwindling marshy spots, is to be considered this year for federal protection as an endangered species. Tell that to the frog. It has been languishing for 22 years — since 1991 — awaiting its day in the bureaucratic sun.

The eastern massasauga rattlesnake has been a candidate for protection since 1982, a legless bridesmaid, never a bride. Ditto the elfin-woods warbler. Like them, the Dakota skipper butterfly, a cucumber-bodied flier that zips unusually fast (for a butterfly) over the Minnesota and Dakota prairies, is dying out as development shrinks its habitat. It nevertheless has hung on, its candidacy deferred since 1975.

Belatedly, the Interior Department’s Fish and Wildlife Service is giving them all — and 258 more — a thumbs up or down for protection under the Endangered Species Act, the 1973 law that was among the early triumphs of the environmental movement.

It is evidence of the law’s travails that it took a federal judge to get them to this point.

Under a 2011 settlement of two lawsuits by conservation activists, the wildlife service has pledged to decide the fates of all the backlogged species by 2018. A schedule issued by the service on Feb. 8 promised to decide by September whether to add 97 species to the endangered list, including 70 covered by the lawsuit settlement.

Moreover, the service has finished preliminary work on more than 550 other potential candidates for the endangered-species list, almost all of which will be further evaluated after the backlog is erased.

“They’ve dramatically increased the number of decisions they’re making — both positive and negative decisions, but the vast majority of decisions are positive,” said Kierán Suckling, the executive director of the Center for Biological Diversity, an Arizona conservation organization that is a party to the settlement.

It is the most feverish activity on imperiled wildlife in two decades, an improbable feat amid ferocious attacks from conservative critics and in an economy with little money to spare for environmental frivolities.

The wildlife service, the steward of most of the 1,400 species on the endangered list, casts the settlement as an opportunity to get back to its mission.

“We accomplished what we wanted to do through the settlement negotiations: to really reduce the litigation so we could have more control over our priorities and focus our limited resources on the species that need attention the most,” Gary Frazer, who heads the agency’s endangered-species unit, said in an interview. “We definitely see it as a good thing.”

The hundreds of backlogged candidates have waited “an unacceptably long time” for final consideration, he said.

Skeptics might ask whether any species that can wait decades for listing was endangered to begin with. The answer, experts say, is that some aren’t; the wildlife service is likely to remove some from consideration after re-evaluation. But most of the rest are probably in declines lasting decades that would not be arrested without outside help.

“Extinction is not an event. It’s a process,” said Patrick A. Parenteau, an expert on the law at the Vermont Law School in South Royalton, Vt. Habitats slowly shrink, populations wither, inbreeding increases and a species weakens until some outside force — a storm, a fire, a dry spell — administers the coup de grâce. The Interior Department said in 1990 that 34 species had gone extinct while awaiting decisions on listing.

The reasons for the backlog vary. Past lawsuits by conservationists forced the wildlife service to spend time and money on tasks like designating protected habitats for already listed wildlife instead of considering new candidates, Mr. Frazer said. Outsiders say chronic budget shortages, past mismanagement and, most recently, politics have also added to the delays.

Under President George W. Bush, “a lot of the management of the program was taken out of the Fish and Wildlife Service and put in hands of political appointees,” Jamie Rappaport Clark, president of Defenders of Wildlife and a wildlife service director under President Bill Clinton, said in an interview. One Interior Department official resigned in mid-2007 amid charges of politicizing the listing process.

Mr. Frazer, who also headed the endangered species program during Mr. Bush’s first years in office, was demoted to liaison to the United States Geological Survey from 2004 to 2008.

Conservationists say that President Obama is somewhat more supportive. But activists, not the government, are behind the law’s revival. During Mr. Bush’s presidency and early in Mr. Obama’s, the Center for Biological Diversity and a Colorado group, WildEarth Guardians, went on the offense, bombarding the wildlife agency with demands to consider hundreds of new species for endangered status.

When the Fish and Wildlife Service said it could not respond within legal time limits, the conservation groups sued to force a response, reaching the 2011 settlement after lengthy negotiations.

Should many of the 800-plus species listed in the settlement be granted federal protection, as seems most likely eventually, the endangered list could increase as much as 60 percent — and encompass more territory than ever before.

That could prompt a salvo of legal challenges to listings from businesses and conservative activists. They say that a greatly expanded endangered species list is almost certain to affect more areas and lead to more responses from affected industries.

“Once they start listing these critters, they’re going to set off reactions,” Mr. Parenteau said. “There’s no way they can insulate themselves from being challenged.”

The petroleum industry has already raised concerns about the potential listing of two species, the lesser prairie chicken and the Gunnison sage-grouse, whose habitats, stretching across the Great Plains and Southwest, have been carved up by farms, oil exploration and other development. The wildlife service is poised to decide by September whether the sage-grouse will join the endangered list and whether to declare more than 2,600 square miles of its range “critical habitat.” Such habitats can require special efforts to protect imperiled species, but large portions, including all existing developed land, are excluded.

In a November letter asking for a public hearing on the settlement, the Independent Petroleum Association of America warned that “the pure depth and breadth of these settlement agreements could harm our membership” and slow oil and gas exploration.

A spokeswoman, Julia Bell, added, however, that the industry and state governments were making voluntary conservation efforts in hopes of heading off federal action.

Developers are increasingly anxious over the possible listing of more than 400 mussels that live in rivers close to urban areas, mainly in the Southeast.

“You’re looking at a doubling of species in areas that are economically stressed” from the collapse of the housing market, Michael Mittelholzer, an assistant staff vice president at the National Association of Home Builders, said in an interview.

Developers who build near endangered species can be required by the Clean Water Act and other measures to acquire federal permits and to avoid adversely affecting imperiled wildlife. Mr. Mittelholzer said acquiring permits is lengthy and complex, and the definition of adverse impact vague.

“Put that in the context of an industry trying to show some green shoots, and it could be very difficult,” he said.

This article was written by Michael Wines and published by the New York Times on March 6, 2013.