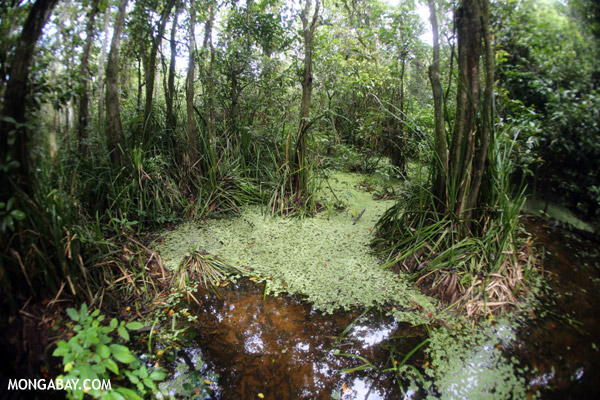 What happens to animals when their forest is cut down? If they can, they migrate to different forests. But in an age when forests are falling far and fast, many species may have to shift to entirely different environments. A new paper in Folia Primatologica theorizes that some 60 primate species and 20 wild cat species in Asia and Africa may be relying more on less-impacted environments such as swamp forests, mangroves, and peat forests.

“Where primates and felids face forest habitat disturbance, they may need to shift habitats, diets, activity patterns,” author of the paper Katarzyna Nowak with Princeton University told mongabay.com. “In areas with swamp forests—like areas with hard to reach mountaintops—these taxa can find safety and shelter in the flooded forest, which may be less disturbed than the adjacent upland forest.”

However, such areas have often been neglected by conservationists, in part due to the difficult terrain, but also because such environments are not usually considered prime habitat for most primates and cats. But remarkable discoveries have already been made: in 2006 the Wildlife Conservation Society (WCS) discovered 125,000 lowland gorillas living in a swamp forest in Lake Télé in the Democratic Republic of Congo (DRC). Nowak argues that more surveys are needed in these often-overlooked ecosystems.

In her paper, she identifies 47 possible sites across Africa and Asia where primates and cats may be taking refuge, including 21 sites in Africa and 26 sites in Asia.

“For primates, Petit Loango in Gabon is certainly a prime mangrove forest site where most of the resident species exploit mangroves,” she says. “We could certainly conduct a more detailed behavioral study of mangrove use here. Less known populations of primates and felids may be found in mangroves of Rio Ntem o Campo in Equatorial Guinea, and Conkouati-Douli National Park in Congo.”

Aside from likely extending refuge to some mammals, these lesser-known forests provide a wealth of ecosystem services. For example, mangroves are known as key fish nurseries, important carbon sequesters, and buffers against tropical storm damage. Despite their huge importance, less than 10 percent of mangroves worldwide are protected and mangroves are vanishing at incredible rates: around 35 percent of the world’s mangroves were lost in just twenty years (1990 to 2010). There has also been rising concern over the loss of peat and swamp forests as well, especially due to carbon emissions and biodiversity decline.

“We must extend our protection of forests to flooded forests, especially mangroves. These may still be less threatened than freshwater swamp forests because of their low nutrient levels and impenetrability. The value of mangroves as important wildlife areas needs to be fully assessed, while mangrove-oriented nature tourism such as wildlife viewing trips in traditional dung-out canoes could help encourage mangrove restoration and even ‘mangrove plantations’ for honey and carbon credits,” says Nowak who also points out that “mangrove reserves are often un-named, designated simply as ‘mangrove forest reserves’ unlike terrestrial protected areas which have distinct names, identities and are immediately recognized.”

Now is the time to start surveying and protecting these “relatively neglected” ecosystems, argues Nowak, who points to new technologies such as remote camera traps that could give scientists an inside look at life in the world’s extreme forests.

This article was written for Mongabay.com and re-posted n Focusing on Wildlife.