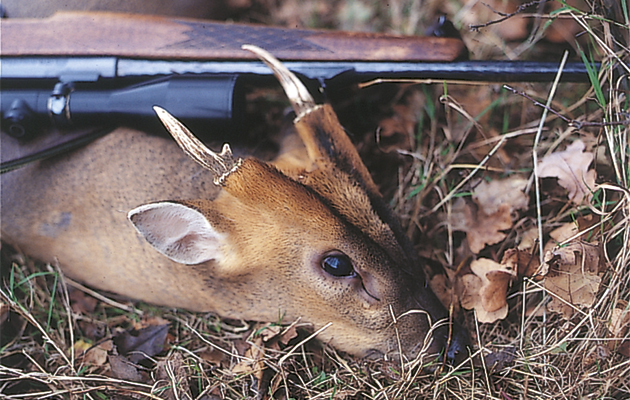 Hunters have been condemned by English Heritage over pictures they took posing with dead muntjac deer at one of the organisation’s properties.

Officials said that some of the hunters were not “respectful” to the deer, which were shot as part of a cull at Wrest Park, in Bedfordshire.

The group were believed to have paid to visit the park and shoot muntjac, which are an invasive species. They then posed, grinning, with the animals with the stately home as a backdrop.

Photographs of the hunt were then shared widely on Facebook, and condemned by local animal rights groups. Their shoot was not illegal, as it was licenced, but English Heritage said posing with dead animals is not respectful.

The group said: “For a national charity this really is quite grubby and we should expect better from them. They may seek to protect the national heritage but there are parts of it that should be consigned to history – such as all these blood ‘sports’ that they embrace e.g. killing innocent animals for fun and money.”

A spokesperson for English Heritage said the organisation was “shocked and saddened” by the pictures, adding that while culls take place on the land, shooting “for sport” is not allowed.

They added: “In accordance with relevant legislation, in some places we need to work with third parties to manage some animal populations. It’s important to us that this is done humanely and respectfully.

“We’ve started a full investigation and can assure you we’re taking this matter extremely seriously.”

Stalking groups in the area charge hunters from £100 per deer.

The small deer was an import from China, and was first introduced to nearby Woburn Abbey at the start of the 20th century. It rapidly spread across South East England, and further releases, deliberate and accidental, established the population nationwide.

They are subject to culls because they are notorious browsers, stripping the ground of vegetation and impeding the growth of plants and trees.

Last year, conservationists warned that bluebell woods were at risk from the mammals, which munch all the green shoots before the flowers have a chance to bloom.

James Sutcliffe, BASC deer officer, said: “Muntjac are an invasive, non-native species in the UK. They can do a lot of damage if not correctly managed. Their population is widespread and they are increasing in both number and range. The management of muntjac is necessary to reduce the significant negative impact they can have on native woodlands, for example.

“Some people may have a rose-tinted view of managing fragile landscapes, but these areas are absolutely best protected by the lawful and essential management of invasive species such as muntjac.”

This article was first published by The Telegraph on 11 May 2021. Lead Image: The muntjac is surprisingly sporting quarry.