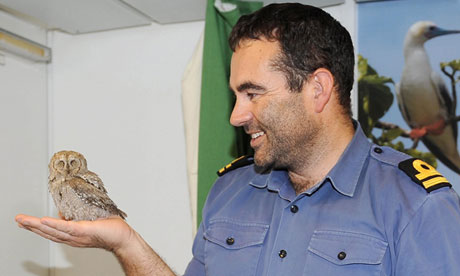 A tiny owl was discovered sheltering on board the Royal Navy’s helicopter carrier HMS Illustrious. The Eurasian scops owl was found cowering under the ship’s crane on the flight deck while the Portsmouth-based warship was off the coast of Yemen during a training exercise.

Leading Airman Mikaele Mua picked up the exhausted bird and passed it on to be looked after by the ship’s meteorology forecaster, Lieutenant Chris Patrick, who calls himself an avid twitcher and who belongs to the navy’s birdwatching society.

Patrick, 44, from Weymouth, Dorset, said birds of the species would be migrating south towards sub-Saharan Africa around this time of year.

He said: “It was clear the poor little thing had literally run out of steam. It must have seen the ship and took refuge. It looked as though it was simply waiting to die.”

He said the small bird would have stood no chance of survival if it had remained out on the deck where the temperature had been averaging more than 40C (104F), and given that strong winds were forecast.

He decided to take the creature to his cabin where he made a comfortable cage, gave it water and tried to feed it small pieces of meat to build up its strength.

After two days, improvements in the bird’s condition were apparent as it became more alert and even tried to fly in the cabin.

Patrick said: “I knew the owl needed to eat live food it had caught itself. With no insects or bugs on board HMS Illustrious, it was clear to me I needed to get it ashore as soon as it was fit enough. The opportunity arose when the ship neared the Oman coastline.”

After giving the owl a final check, he released it. “The bird looked in good condition when it left and it was heading to shore with the prevailing winds. We all hope it made the journey safely.”

This article originated from the Press Association and was published by the Guardian.

lets hope the little fellow made it.