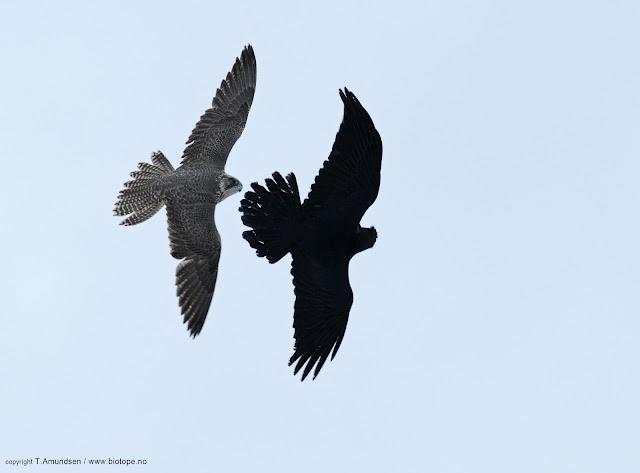 Scientists have strapped tiny video cameras to the heads and backs of falcons to learn how the birds hunt their prey.

Footage from the on-bird cameras revealed the strategy the predators used in flight as they chased down crows and closed in for the kill.

Rather than head straight for their target, the falcons kept their quarry in a fixed position to one side, allowing them to close in on the prey in the stealthiest way possible.

The strategy exploits an effect called motion camouflage, where the predator does not seem to be moving from the point of view of the prey. Done well, the only clue that the bird is approaching is the gradual increase in its size.

“To the crow, the falcon will look as though it’s hovering motionless, and except for this looming effect – the change in size – it won’t appear to be homing in,” said Suzanne Kane, who led the study at Haverford College in Pennsylvania.

Kane worked with falconers in Britain, the US, the Netherlands and Belgium. They attached miniature cameras to eight birds, including six peregrine falcons, and two hybrids that were mixes of Saker and gyrfalcons. Gyrfalcons are the largest of the falcon species, and have adult wingspans of more than one metre.

The cameras were attached to backpacks strapped on to the birds, or to helmets with eye holes that the birds wore. “They look like they’re wearing the kinds of helmets that fighter pilots used to wear,” Kane said.

The scientists analysed video footage from falcons flying in Pennsylvania, Arizona and Wyoming in the US. The footage from the falcon in Britain was cut short after the bird was shot out of the sky by a farmer.

The striking footage gives a falcon’s-eye view as the birds select and go after crows in mid-air. “They come in very, very fast and use their talons and the force of impact to kill the bird, or they very quickly break its neck,” said Kane. “Which isn’t very nice to think about.”

The research project arose from Kane’s interest in how birds that are preyed upon evade their predators. But before she could investigate that, she needed to understand more about the strategies predators use to catch them.

The work could inspire research on flying robots, but Kane said she hoped it might eventually lead to better ways to prevent birds from clattering into wind turbines, buildings and other manmade structures. ” Their way of experiencing their environment is fundamentally different to the way we experience ours,” she said. Details of the study appear in the Journal of Experimental Biology.

This article was written by Ian Sample for the Guardian.