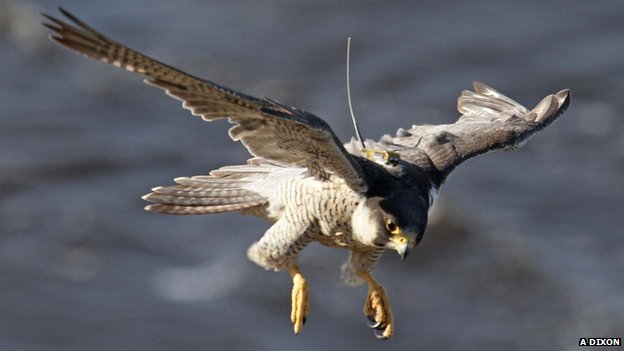 Falcons rapidly evolved their renowned hunting skills, a study has found. Scientists from Cardiff University have sequenced the genome of peregrine and saker falcons for the first time. Research revealed that compared with other species, these birds of prey have been subjected to fierce competition and pressures, leading them to adapt quickly in order to survive.

Investigation of the genes responsible for the birds’ unique beaks highlighted this rapid development. The name falcon comes from the Latin word falco, meaning hook shaped and refers to the birds’ strongly curved beaks.

“We have been able to determine that specific genes, regulating beak development, have had to evolve to withstand the pressure of impacting their prey at a speed of up to 300 kilometres an hour,” explained Professor Mike Bruford, who authored the paper published in the journal Nature Genetics.

“The shape of the falcon beak has also had had to evolve to be capable of tearing at the flesh of its prey.” The hunting skills of falcons are well known, with the peregrine falcon often referred to as the fastest animal on Earth due to the impressive speeds at which it plummets through the air to catch prey.

Researchers worked with experts at the Beijing Genomics Institute in China to obtain the genome sequences of the birds. They discovered the “revelatory” evidence of the falcons’ evolutionary history when comparing their genomes with those of other birds that have had their genomes sequenced: chickens, turkeys and zebra finches.

Through DNA sequencing, they were able to identify the genes behind the birds’ exemplary predatory adaptations. These adaptations include hard skulls to allow the birds to survive collisions with their prey and highly efficient circulatory and respiratory systems to cope with the extreme air pressure encountered during their high-speed dives.

Tracking when and how these genes developed, the scientists identified that the process was very rapid and theorised that this was due to intense competitive pressures experienced by the birds as they sought prey. “Evolution seems to be pushing the genome sequence in an unusual direction,” said Prof Bruford.

“If we had found this just in the peregrine, that would have been interesting, but we also sequenced the saker falcon and it shows the same pattern, leaving us with the most likely explanation that it is their predatory lifestyle [that is responsible].” Saker falcons are found across Central Asia and the research team were able to understand more about how they developed to live in arid environments.

The birds are listed as endangered in the wild and conservationists from International Wildlife Consultants, Carmarthen, who co-funded the project hope an improved understanding of their history will help safeguard the species for the future.