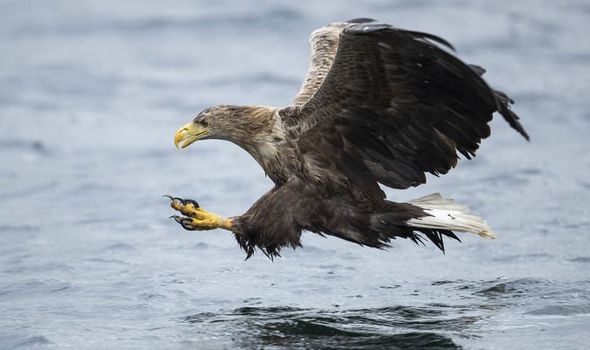 A PLAN to reintroduce white-tailed eagles into the East of England has triggered concerns the birds of prey may swoop on piglets, lambs and even pets.

Natural England has granted permission for this species of large sea eagles to be released in Norfolk, with the hope that a breeding population can be established by 2026 at the earliest. A spokesman for the National Farmers’ Union described worries about the threat to agriculture. He said: “The likely range of these birds is home to around half of the country’s outdoor reared pigs and poultry, and is also an area with a significant amount of sheep grazing. Farmers are worried sea eagles will prey on livestock including lambs, piglets and free-range poultry.”

White-tailed eagles, which can have a wing-span of up to 2.5 metres, were exterminated as a breeding species in the 18th century but over the past 40 years breeding populations have successfully re-established in Scotland and Ireland. They are considered Britain’s largest birds of prey and, according to the RSPB, require 500-600g of food a day while rearing their young in breeding season.

Roy Dennis, an ornithologist and wildlife consultant who is involved in the plan to re-introduce eagles to Norfolk, said a similar project on the Isle of Wight had not resulted in livestock deaths.

In fact, he said, there was enormous public excitement at the sight of the great birds.

He said: What we found, particularly in lockdown, was the incredible enthusiasm of the English public… People have been just thrilled that something so big and wild can again be seen in their countryside, so all we’re getting is intense enthusiasm.”

The Department for Environment, Food and Rural Affairs wants to see a “wilder Britain”, and minister Rebecca Bow said the eagles were not expected to endanger livestock or pets.

She said: “The evidence strongly suggests it is most likely that the birds will feed on a range of wild prey and carrion – fish, birds, rabbits and hares – usually around the coast or waterbodies. The areas surrounding the proposed release site will provide ample wild prey for the birds.

“There appears to be no evidence of livestock or pet predation elsewhere in Europe with the exception of some lamb predation in Scotland where husbandry conditions are very different to East Anglia and there is a lower abundance of wild prey.”

However, Sir Greg Knight, the Conservative MP for East Yorkshire, is concerned about the prospect of the eagles returning to England and has asked the Government what assessment has been done of the risk to both livestock and pets.

He said: “These birds are Britain’s largest bird of prey, and experience from their reintroduction to Scotland shows that they can, in some circumstances, prey on livestock, such as lambs.

“While ministers and Natural England have given assurances that these birds will not pose a threat to livestock in England, both the National Sheep Association and the National Pig Association have expressed disappointment at the decision to grant a licence. I therefore believe that effective on-going surveillance is required to ensure that these birds do not harm wildlife, and Natural England should have in place, and maintain, robust plans both to monitor the situation, and to take action where necessary if livestock is threatened.”

Dave Slater of Natural England defended the decision to grant a licence to release eagles at Norfolk’s Wild Ken Hill.

He said: “Our experts have carefully assessed the project… We are satisfied that there are no significant risks associated with the project, and that the applicants have demonstrated a responsible, well-managed approach that makes a positive contribution to nature’s conservation.”

This article was first published by The Express on 22 May 2021. Lead Image: Fears are rising white-tailed eagles will kill piglets (Image: Getty).