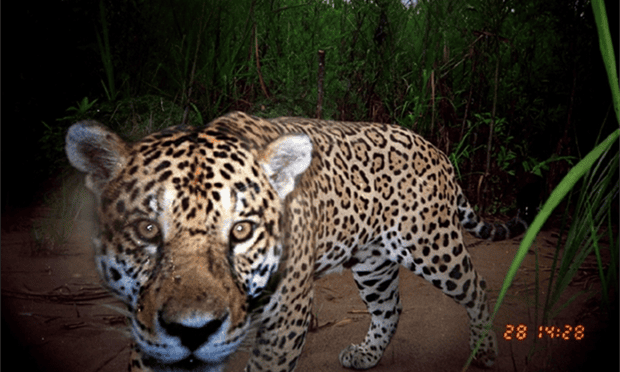 Elizabeth Unger was a 25-year-old biology graduate working as a PhD research assistant for big cat and climate projects in Latin America when she heard about the Bolivian authorities intercepting dozens of packages containing jaguar fangs sent by Chinese citizens to addresses in China.

“I was really blown away as [the story] was completely under the radar,” she says. Six years later, she is making her directorial debut with a film about the trade, which is contributing to a decline in the population of Latin America’s iconic big cat.

There are between 64,000 and 170,000 jaguars left in the world, a fraction of their previous population number, earning them a place on the IUCN’s red list as near threatened. Habitat loss, human-wildlife conflict and local pet and skin markets, as well as trafficking, have all contributed to the drop in numbers.

I wanted people to relate to this animal. Its mysticism; the mystery, the poetry and the symbol for so many cultures
Elizabeth Unger, film-maker

Tigre Gente, which premieres at the Tribeca film festival this month, follows a Bolivian park ranger and a young Hong Kong journalist who goes undercover to investigate the trade in jaguar fangs.

The film moves from mist-shrouded jungle ravines in Bolivia’s mega-biodiverse Madidi national park to the skyscrapers and bustling commerce of Hong Kong and Guangzhou.

Unger, 31, told the Guardian that as well as telling the story of the jaguar trade, “I really wanted to make people feel they could relate to this animal. Its mysticism; the mystery, the poetry of the apex predator of the Americas and the symbol for so many cultures.”

One of the stars of the film is Marcos Uzquiano, director of Madidi national park, who leads a team of rangers on the hunt for poachers who kill jaguars for their teeth and pelts to sell for a few hundred dollars on the hidden market. Uzquiano, born and raised around the park, which has one of the continent’s healthiest jaguar populations, shares Unger’s awe and respect for the big cat. He calls it a “symbol of life and strength”, which holds a mythical status for the local people.

On the other side of the world in east Asia, the body parts of big cats have historically been used in traditional Chinese medicine. Today, jaguars and their body parts are still being trafficked in dangerously high numbers.

A study of jaguar trafficking between 2012 and 2018 published in the journal Conservation Biology last year found that “jaguar seizures increased over time, and most of the seized jaguar pieces were canines”. About 34% of the jaguar-part seizure reports were linked with China.

Investigative reporter Laurel Chor, 31, a Hong Kong native, secretly filmed the bustling wildlife markets in Myanmar and talked to Chinese citizens, including her own family, to examine the desire driving the rising demand.

“She is a badass,” Unger says of her female protagonist. “She had a history of trafficking investigations and research, and a deeper more nuanced look at the Chinese mentality behind the demand.”

There are some heart-racing action sequences; a boat chase along a river as the rangers pursue suspected poachers who try to ram their boat. The rangers also go undercover with secret cameras to track down traffickers.

“They really are heroes and they care,” Unger says of the park rangers she spent three years with making the film. “I was just so grateful they allowed us to follow them for so long, especially in situations when we were definitely in the way.”

Unger says she hopes the film, partially funded by National Geographic, will help to battle “western misconceptions” about Chinese attitudes to wildlife consumerism.

“There’s only a small subset of the Chinese populations that actively buys these things but that’s a large group of people because China is massive,” she says, adding that anti-trafficking laws are starting to have an impact.

Towards the end of the film, Chor gives a talk about conservation to children at a Hong Kong school. By bringing the film to the big screen, the film-makers hope it will add impetus to the fight for the jaguar.

This article was first published by The Guardian on 12 June 2021. Lead Image: A jaguar caught by camera trap in Madidi national park, Bolivia. Photograph: Courtesy of WCS.