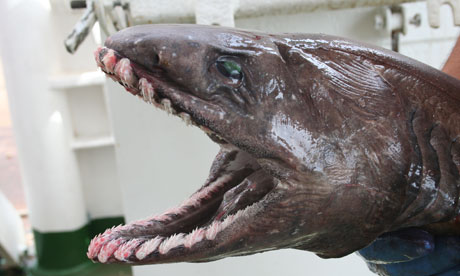 Fishing is expected to be banned near the Atlantic islet of Rockall after a rare methane gas vent in the seabed and two new shellfish species were discovered by British scientists.

The methane, which leaks through a so-called “cold seep” vent in the ocean floor, was found last year by scientists working with the government agency Marine Scotland. It is the first of its kind to be found near UK waters and only the third in the north-east Atlantic.

It was detected after Marine Scotland’s Scotia survey ship trawled up two new species of deep-water clam that have a “chemosynthetic” relationship with the methane: the clams’ food source is a bacteria that harvests the gas. That implies there may be a complex ecosystem around the mouth of the vent.

Francis Neat, the Marine Scotland scientist who oversaw the survey, said the site roughly four miles west of Rockall island was comparable to the complex habitats that build up around often exceptionally hot mineral-rich hydrothermal vents found on mid-ocean ridges.

The clams were “packed full” of polychaete worms that are also expected to be new to science, he said.

The International Convention on the Exploration of the Seas, an intergovernmental agency which polices fish stocks in the North Atlantic, has now recommended a fishing ban for the site (pdf), which is international waters, to protect it from highly damaging bottom trawling.

It has also requested additional fishing bans – adding to several already in place – at three other sites around Rockall to protect rare cold-water coral, sea sponge colonies, and sea fans or gorgonians which are being harmed by bottom-trawling.

The agency’s surveys around Rockall also caught a frilled shark, an ancient “living fossil” species of shark that dates back at least 90m years and is rarely seen in northern waters. They found unusually large adult cod – known as “buffaloes” by fishermen, and large ling, saithe and haddock, suggesting Rockall’s waters were very rich in food.

Two large areas around Rockall, the remote islet 230 miles west of the Outer Hebrides that adventurer Nick Hancock unsuccessfully tried to occupy this month, are already closed to fishing.

Hancock had hoped to beat an occupation record of 42 days set by three Greenpeace campaigners, who lived on Rockall in 1997 and renamed it the new micronation of Waveland in protest at potential oil and gas exploration in the area. The discovery of methane leaking from the Rockall basin is likely to interest the same energy companies looking for untapped sources of oil and gas in the Atlantic.

The Irish government has approved a seismic survey off its western coast, stretching southwards from the Hatton Rockall basin, but Greenpeace said the latest habitat discoveries should serve as a serious warning against any drilling in the area.

Charlie Kronick, a senior climate adviser at Greenpeace, said: “The discovery of new shellfish species in the unique ecosystem surrounding Rockall is yet another vindication of Greenpeace’s record-breaking occupation of this iconic crag 16 years ago. Nearly two decades later we’re still learning more about how precious this marine environment really is.

“Drilling for oil and gas in places like Rockall would damage this environment twice – by ravaging a seafloor home to unique creatures while also feeding our addiction to fossil fuel, which is disrupting the climate and wreaking havoc in every corner of the planet.”

Neat said the methane might be biogenic, caused by gas building up from rotting organic matter similar to vegetation in swamps, but at that depth and distance from shore, it was more likely to be from fossil hydrocarbon deposits in the rocks.

The cold seep was missed by a survey of the seabed by the then Department of Trade and Industry in 2005. Chiefly found in areas such as the Gulf of Mexico, Sea of Japan and off Africa and Costa Rica, the only other two cold seeps in the north-east Atlantic are off Norway and the Gulf of Cadiz.

Neat said Marine Scotland was trying to win funding from the DTI’S successor, the Department of Energy and Climate Change, and the Joint Nature Conservation Council, an independent scientific research agency, for a full-scale seabed survey of the area using a remotely operated vehicle (ROV) mini-submarine.

The Rockall basin was particularly valuable to marine science, he said, because it was the only major outcrop of subsea peaks west of the UK. He said it was equivalent to finding a submarine version of the Cairngorms. There were “fantastic feeding grounds for fish”, Neat said.

When sea levels were far lower in the last ice age, there was an archipelago of islands around Rockall, now all submerged except for Rockall’s 18-metre-high surviving peak. One which sits just below the surface, Hasselwood rock, is notorious for wrecking ships.

“We’ve got a submerged piece of continental land out there,” he said. “We’ve a few volcanic pinnacles and a great shallow area in the middle of the deep sea. It’s really quite special, having a lot of species we wouldn’t normally find that far offshore. It provides a shallow water habitat in what is otherwise a deep water environment.”

This article was written by Severin Carrell for the Guardian UK.

So rare a shark… they killed it, lets hope that a male and female survive, otherwise man has just made another species extinct!

So rare a shark… they killed it, lets hope that a male and female survive, otherwise man has just made another species extinct!