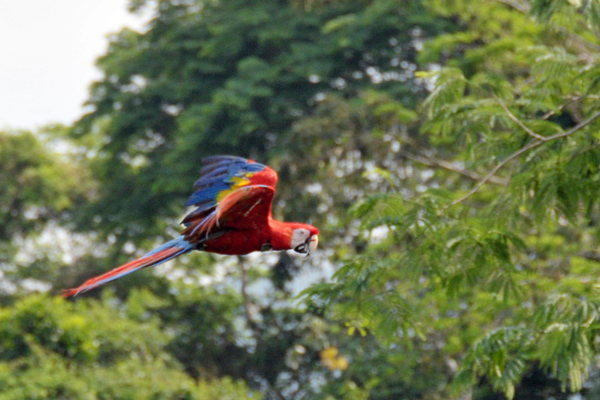 On April 21, 2013, the first flock of scarlet macaws (of many more to come) was released into the jungles of Aluxes Ecopark, nearby classified World Heritage Site Palenque National Park, as a part of a massive reintroduction project to restore the popular and culturally-significant bird to the well preserved rainforests of Palenque and the rest of its southern Mexico homeland—where the species has been extinct for close to 70 years. The highly anticipated release was the result of years of coordinated efforts between the conservation ecoparks Aluxes and Xcaret, the Institute of Biology of the University of Mexico (UNAM), and the Mexican environmental agency (SEMARNAT).

Despite being listed as Least Concern on the IUCN Red List, the brilliantly-colored scarlet macaws that were once a common sight across the southern range of Mexico have all but disappeared due to habitat destruction and the illegal pet trade. Now existing in a mere 2% of their former range, only 200 scarlet macaws are estimated to still linger near the Guatemalan border of Mexico, 50 in the mountain region known as Chimalapas, and just 200 more between Belize and Guatemala. But a decade of community-oriented forest restoration projects, conservation awareness campaigns, and supervision in Palenque—supported by SEMARNAT officials and even the Mexican Army—have all but eradicated tropical rainforest destruction in the region and the wildlife trade has rapidly declined.

“Important segments of forest still remain in the south via the presence of biosphere reserves, national parks and other types of protected areas,” says Alejandro Estrada, one of the leading researchers from the Institute of Biology of UNAM and president of the Scientific Council of Aluxes Ecopark, who helped design and implement the project. He and his colleagues believe the constellation of these remaining protected forest areas will provide sufficient habitat for the scarlet macaws, which possess both long-distance flight behavior and longevity, to thrive.

“Using reintroductions of the subspecies as a conservation tactic to avoid total extinction is an IUCN recommended measure for restoring extinct species within their historical range or for reinforcing very small populations,” Estrada goes on to explain, adding that in the long term, the reintroductions should “create a scarlet macaw corridor that will reconnect the remnant populations with the introduced macaws and will result in a region wide restoration of the scarlet macaw in its northernmost distribution in the Neotropics (Mexico).”

With apparently enough protection afforded to the scarlet macaws and their habitat, the next challenge for the project lay in organizing and gaining approval for the reintroduction. The idea to reintroduce the scarlet macaws to the region of Palenque originated in 2007 with CEO of the local Aluxes Ecopark Dr. Salomon Gonzalez Blanco and biologist Marco Lazcano, but didn’t move forward until a larger Aluxes collaboration took place in 2011 between the Mexican Caribbean Ecopark, Xcaret—the only known place where captive scarlet macaw breeding has been successful in large numbers—and UNAM to run the Aluxes-funded health and genetic analysis required to ascertain that the ecoparks had the historically appropriate scarlet macaw subspecies, Ara macao cyanoptera, to release into the wild. Next, the project’s release methods had to be consolidated to meet standards set by the IUCN, the 2008 multinational scarlet macaw reintroduction workshop, and SEMARNAT itself before the government agency would grant a permit.

“So far we have 100% success with the reintroduction,” says Estrada, noting that all 17 reintroduced macaws are still alive and accounted for, and are showing signs of adjusting to the wild with an apparent fondness for hanging out near the park’s manatee lagoons.

“A second flock of 10 is scheduled for release on June 23rd, and from here on we will be releasing small flock (about 10-12 each time) until we meet the quota programmed for this year of 60-70 macaws,” Estrada continues.

Such releases will continue into 2015, and if successful, would result in the doubling of the current population of scarlet macaws in the wild with numbers conducive to breeding.

Though stringent in the approval process, the Mexican government has offered significant support in publicizing the return of scarlet macaws to wild. Since May 2012, campaigns have helped to build local pride around the majestic bird with the government making available state radio and television systems for scarlet macaw project coverage, including interviews, progress updates, the implementation of a yearly Scarlet Macaw Festival, and invitations for the public to act as guardians of the beautifully plumed birds finally returning to their ancestral homeland known for its ancient Mayan ruins. Already, the community of Palenque appears to be captivated with the reappearance of the macaws; Aluxes Ecopark continues to receive reports of sightings from city dwellers—taxi drivers en route to Palenque National Park, especially—and indigenous communities alike. Estrada is hopeful that with growing pride accompanying the return of the scarlet macaws, concern for them will provide an umbrella effect of deeper interest over other species’ habitats as well.

With all the prohibitive hurdles overcome, the final challenge the scientists face is to ensure that the young and naïve captive-bred scarlet macaws successfully transition into living in the wild.

To prepare birds that rely heavily on learning and membership in flocks for their survival, the caretakers have engaged the birds in what is known as a “soft release protocol” coupled with intensive training. In the Aluxes aviaries located close to Palenque National Park, the birds are housed together for several weeks to promote flock formation, taught to recognize and find wild foods, and also drilled in predator avoidance. They’ve been introduced to potential predators like raptors, snakes, and other mammalian carnivores, as well as encouraged to avoid humans. The only human contact the birds have is during the few minutes a day a caretaker provides food and water, and during brief “poacher avoidance” exercises. Once released, the birds are trained to use the aviary area as a “safety base,” and are provided daily seed provisions in aerial platforms to supplement their diets as they adapt to foraging for wild foods.

The macaws will be tracked for years after their release in order to monitor how reintroduction efforts are going and follow their dispersal into the surrounding jungles. Along with micro-chipping, beak marking, leg bands, and a number of radio collars fitted on several macaws, plans to use conservation drones developed by Dr. Lian Pin Koh of the University of Zurich under way in tracking the macaws. Artificial nest boxes are also being set up in the release area for reproductive activity and presence monitoring.

With the Mexican municipal, state, and federal levels of government all on board and involved in ensuring the reintroduced macaws’ well-being, an involved community, and dedicated scientists, the fate of the scarlet macaws’ return looks hopeful. But perhaps the greatest measure of the scarlet macaw reintroduction’s success will be felt when the residents of southern Mexico can again look to the skies and see the rainbow-esque streaks of macaws soar by with normalcy that will still be nothing short of extraordinary.

This article was written by Patricia O’Neill for Mongabay.com