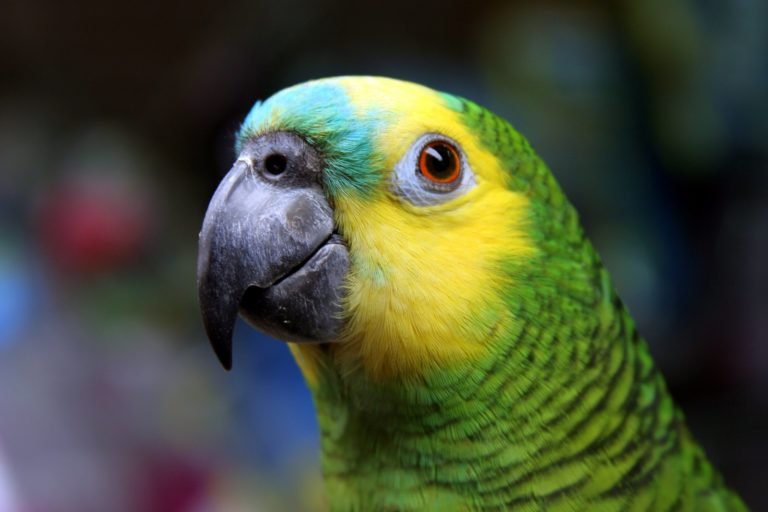 It’s a natural phenomenon that you could set your calendar by: every August, the turquoise-fronted parrots (Amazona aestiva) of Brazil’s Cerrado biome start laying their eggs. The chicks hatch soon after, and by November have left the nest.

The cycle is so constant that every year, for decades, poachers have been stealing eggs and chicks from the nests to supply the illegal pet trade. There are no precise figures for the number of birds that get caught or die in this process, but it’s believed to be in the thousands each year.

“In the São Paulo metropolitan area alone, undoubtedly more than 12,000 hatchlings are brought every year to supply illegal sales,” says Marcelo Pavlenco Rocha, president of the NGO SOS Fauna. Rocha has been following the illegal trafficking of turquoise-fronted parrots in the Cerrado for 18 years.

Gláucia Helena Fernandes Seixas, a researcher and coordinator of Projeto Papagaio-verdadeiro (Turquoise-fronted Parrot Project), says more than 11,000 chicks have entered the Wild Animal Rehabilitation Center (CRAS) at the Mato Grosso do Sul Environmental Institute (IMASUL) after being seized by state agencies over the past 32 years. And this is just the tip of the iceberg; most of the poached birds are never confiscated, Seixas points out.

“Considering the fact that many chicks die during the different phases of this illegal process, which involves taking them from their nests, holding them in unhealthy containers and transporting them inadequately, and that surveillance doesn’t manage to intercept most of the birds taken illegally from nature, it is estimated that the animals received at treatment centers represent a small portion of the number of turquoise-fronted parrots that are actually poached,” says Seixas, who has worked to conserve the species since 1992.

Turquoise-fronted parrots are classified as a near-threatened species on the IUCN Red List. “This category is given to species that are near to or have a strong probability of reaching the status ‘threatened with extinction,’” Seixas says.

The species is also among those included in the National Parrot Conservation Plan of Action, called PAN Papagaios in Portuguese, at the Environment Ministry’s Chico Mendes Institute for Biodiversity Conservation (ICMBio). It’s considered the most highly trafficked species among the six included in the PAN and, according to Seixas, also the most sought-after on the black market of Brazil’s 12 native parrot species. “This is due to its reputation as being the ‘best talker’ when compared to other species,” she says. “This is how it earned the nickname ‘true parrot.’”

But wildlife trafficking isn’t the only threat to these parrots. The turquoise-fronted parrot also suffers from the destruction and alteration of its habitat due to deforestation, fires, and conversion to pasture and farmland. They also face retaliatory hunting by farmers frustrated by the damage that the birds can cause to crops.

How the traffickers work

Outside the Cerrado, turquoise-fronted parrots are also found in the Caatinga, Pantanal and Atlantic Rainforest biomes. They’re found in Brazil’s northeast, southeast, and central-western regions, as well as in parts of Bolivia and Paraguay.

Much of the trafficking that occurs in Brazil today is in the Cerrado, especially the state of Mato Grosso do Sul, where officials consider the activity one of their main environmental problems. Gangs of poachers also work in the states of Mato Grosso, Goiás, Tocantins, Minas Gerais, Maranhão, southern Piauí and western Bahia.

In 1997, Seixas founded the Turquoise-fronted Parrot Project, today run by the Parque das Aves bird park and the Brazil Neotropics Foundation, in response to the poaching going on in Mato Grosso do Sul. Through research she carried out and read, she found that the birds typically lay their eggs in August, hatch them in September, and the young birds leave the nest by November.

This consistent schedule and the fact that turquoise-fronted parrots always seek out the same trees to lay their eggs and raise their young allow animal smugglers to plan their activities and steal the hatchlings with little effort. About a month before hatching, the traffickers converge on Mato Grosso do Sul’s border region with the states of São Paulo and Paraná, where they make deals with local landowners, squatters, workers and others about the price of each chick and details for their extraction. 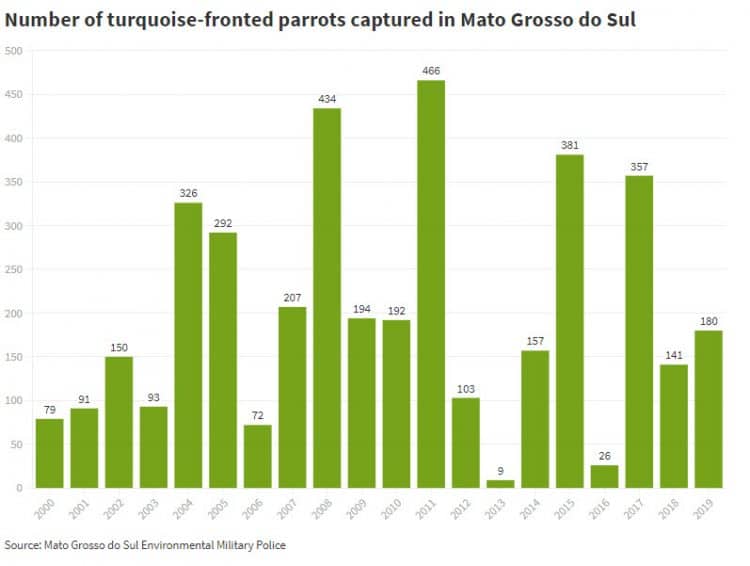 Rocha from SOS Fauna says the people doing the actual poaching receive between 25 and 40 reais ($4.50 to $7.25) for each chick. Ednilson Paulino Queiroz, a lieutenant colonel with the Mato Grosso do Sul Environmental Military Police unit, says the figure can go as high as 60 reais ($11). The hatchlings, many of them still without feathers and with their eyes still shut, are kept hidden in the forest inside camps or the homes of locals who participate in the trafficking. They’re then transported in batches — stacked in boxes with little ventilation or water — across state lines by car.

Queiroz says most of the chicks poached from Mato Grosso do Sul are sent to the São Paulo metropolitan area. A smaller number go to the state of Paraná. Rocha says the birds collected from the Cerrado in other states go as far afield as Rio de Janeiro, Belo Horizonte and Brasília. In the city of São Paulo, the birds are sold at street fairs and online for prices ranging from 200 to 450 reais ($36 to $82) each. A legally registered bird, raised by licensed breeders, costs more than 3,000 reais ($550).

Unhatched eggs are also trafficked, but there are no records of confiscation because they are more easily hidden by traffickers. These are generally sent overseas due to ease of transport; live birds are noisy and require more space and care than eggs.

The Mato Grosso do Sul Environmental Military Police unit has different strategies for tackling the trafficking. Its personnel visit areas where the parrots breed to encourage residents and neighbors not to become involved with smugglers looking for chicks. They also patrol any accessible nesting areas, form roadblocks on rural roadways, and maintain a database of residents who have previously worked with the traffickers to monitor ongoing activity.

Of the 330 environmental MPs in Mato Grosso do Sul, 25 are dedicated to fighting wildlife trafficking. Their projects are carried out according to studies done by the MP intelligence unit. “We also inform the Federal Highway Police and the Military Police in the region, who are fundamental during this period. While the environmental police work to prevent having the hatchlings removed from their nests, the local MP has managed to seize those which were taken,” Queiroz says.

Yet despite their years of work, large numbers of baby turquoise-fronted parrots continue to be trafficked out of the region.

Rocha is critical of the work being done to address the problem. “Nothing has changed. On the contrary, over the last six or seven years, it has only worsened,” he says. He blames it on a lack of coordination between the various governmental agencies and civil institutions involved. “A procedural protocol must be created that will vary from state to state. Also, the public institutions alone do not have the power to act alone because of the many lines of thinking within each institution,” Rocha says.

Seixas says the increased surveillance activity against the trafficking of turquoise-fronted parrots initiated in recent years in Mato Grosso do Sul is fundamental for tackling the problem in the most affected regions. “However, it is important that they are maintained year after year throughout the entire extension of the Cerrado and Atlantic Rainforest during the species’ reproductive period. If [surveillance] is continuous and effective, positive results in the medium to long term are possible,” she says.

Queiroz says there need to be stronger penalties in place for trafficking. Under Brazilian law, trafficking-related activities such as the capture, storage, transport and sale of animals without government authorization are classified as minor offenses punishable by six months to a year in jail. In practice, this means that perpetrators can typically be freed on bail and never serve time for their crime.

In these cases, the Public Prosecutor’s Office is also required to give perpetrators the option of paying a fine or performing community service. If the perpetrator accepts, the case doesn’t even go to trial. “To give you an idea, there was a poacher that we arrested three times in the same breeding season,” Queiroz says.

The consequences of trafficking

A shrinking turquoise-fronted parrot population is not only the consequence of traffickers’ constant removal of chicks and eggs from the wild. This species lays its eggs in cavities inside the trunks of trees like the macaw palm or queen palm, which are commonly damaged during poaching. This leaves fewer tree cavities available for the species to nest in with each passing year. “The result is that many natural turquoise-fronted parrot populations many be diminishing or aging,” Seixas says.

Fewer birds in their natural environment could also result in changes or imbalances in the ecosystem.

Another problem is the transmission of zoonoses — illnesses that can be transmitted from animals to humans. In the case of turquoise-fronted parrots, one problem can be psittacosis, or parrot fever, an endemic infectious disease in Brazil that is difficult to diagnose and can cause pneumonia in humans, leading to death.

A market driven by culture

Since the arrival of the Portuguese in South America in the 16th century, parrots have traditionally been kept as pets throughout Brazil. Their main attraction for people is their ability to mimic human voices. Until 1967, Brazil had no laws in place regulating the capture, sale and keeping of wild animals as pets.

Today, there are many legally licensed commercial breeders of turquoise-fronted parrots in Brazil. A 2019 report by the NGO World Animal Protection found that 74 of the 246 legal commercial bird breeders in Brazil raise and sell A. aestiva. But trafficking of the species remains intense: it ranked eighth among all species trafficked in Brazil from 1998 to 2018, according to a study cited in the report.

Maurício Forlani, a biologist and wildlife campaign manager at WAP, says legalized sales have not been effective in countering trafficking; the best-selling species in the legal trade also tend to be the best-selling species in the illegal trade. “A drop in demand for wild animals is doubtless one of the strongest forces against trafficking,” Forlani says, adding that legalized sales of wild animals for the pet market must end.

He says investing in environmental education is essential for helping people understand that liking an animal does not mean having to own it. “I don’t see [law enforcement] as an effective tactic to reduce trafficking of parrots, even if more effective legislation is passed. We need to reduce the demand for wild parrots and invest in programs that help people to appreciate nature in nature itself.”

Seixas agrees. She says efforts to sensitize local communities where trafficking occurs are essential, together with a society-wide mobilization to get people to stop buying parrots.

This article by Dimas Marques was first published by Mongabay.com on 1 September 2020 and translated by Maya Johnson. Lead Image: Turquoise-fronted parrot (Amazona aestiva) by Matt Watts.