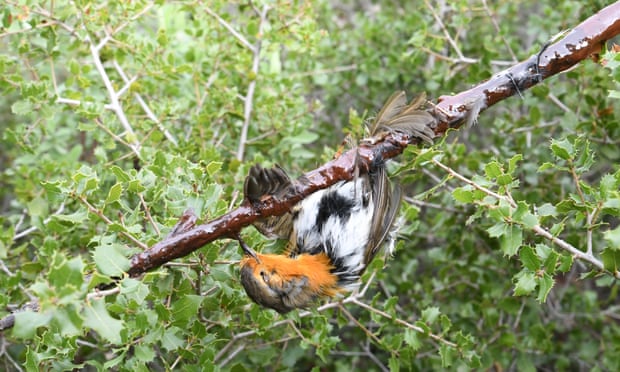 France’s highest appeals court has ruled that the hunting of songbirds with glue traps is illegal, saying an exemption that had permitted the practice was in breach of European legislation.

For generations, hunters mainly in the south of France have caught songbirds by coating branches of trees with glue, often using the singing of other caged birds to lure birds to land. Birds are caught for sport or food.

Hunters say the songbirds are later released unharmed, but critics say the technique invariably leads to the capture of a wide variety of birds that are often injured, including having their feathers damaged or torn off.

European law has banned the practice since 1979 as cruel and a danger to threatened species. France was the only EU country that provided an exception to the ban, under a 1989 decree allowing glue trapping as long as it is “selective, controlled and in limited quantity”.

In a statement on Monday, the court said it had cancelled the French legislation that allowed glue hunting, after the European court of justice ruled the practice was not selective and contravened EU rules.

Neither the government nor the French hunters’ federation had submitted “sufficient proof” that other birds than those targeted did not suffer from the practice, or that they were released without any physical harm, the court said in its ruling.

The EU court ruled that the birds captured, even if cleaned and released, can sustain irreparable harm.

Allain Bougrain-Dubourg, head of the French bird protection league, told AFP: “Finally we’re turning the page on this hunting practice from another time, and are entering the 21st century that is more respectful of the environment.”

He added, however, that other “unacceptable” hunting practices still needed to be banned.

But the president of the national association in favour of thrush hunting, Eric Camoin, said the council had “given in to the lobbying by the environment minister and by the enemies of hunting”.

France was the last EU member to continue allowing the traps with an annual quota of 42,000 birds, though President Emmanuel Macron suspended the hunt last August pending the EU court ruling.

Two campaign groups had brought a case against the French environment ministry, arguing that the “barbaric” practice constituted animal cruelty.

Activists say that 150,000 birds die annually in France from non-selective hunting techniques such as glue traps and nets at a time when Europe’s bird population is in freefall.

This article was first published by The Guardian on 28 June 2021. Lead Image: A European robin trapped with glue on a stick, in France. Photograph: Courtesy LPO.