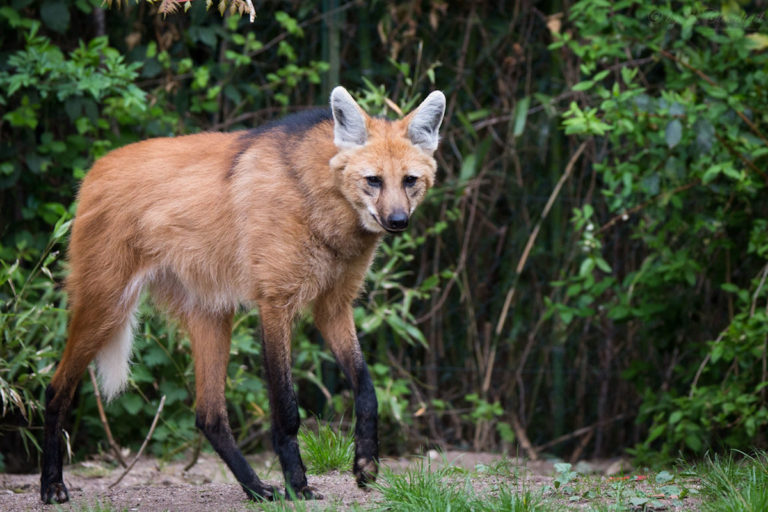 In a once-cleared patch of rainforest, four black-tufted marmosets scamper up to a pile of bananas lying in a plastic dish on the ground. Within the banana flesh are the seeds of a local native tree, hidden there by scientists. After briefly investigating, the marmosets (Callithrix penicillata) dig in. When they’ve eaten their fill, they dash away, eventually to poop out their fruity snack — and with it, the precious seeds that could help restore the recovering patch of Brazil’s Atlantic Forest.

That is a scene caught on camera trap as part of a recent study, published in the December 2020 Journal of Applied Ecology. It describes a potential new way to fill in that gap in the forest: enlisting fruit-eating birds and animals, called frugivores, to spread native seeds.

One of the most common ways to restore a forest is through directly planting seedlings or sowing seeds into the ground. These methods are quite expensive, which is a big obstacle for many restoration projects.

The new method aims to help. It “is very simple, very inexpensive, and quite effective,” said Cristina García, a plant ecologist at the University of Liverpool, U.K., and an editor of the journal that published the study.

“Instead of planting the trees, what you do is restore the ecological process that drives that natural regeneration,” which often works better than the laborious process of manually planting trees, García said.

Attracting animals with fruit isn’t new, but this study presents the fresh idea of using the animals already present in a forest to carry seeds back out into the environment.

Called “induced seed dispersal” (ISD), the technique recruits common animals to fulfill a role played by more specialized frugivores that may have vanished from those areas. Other studies have shown that animals that eat a wide variety of foods can still thrive in disrupted environments. For that reason, Brazilian ecologists suspected that ISD could work well in degraded or partially restored sites.

“Years ago, I placed a fruit feeder in the backyard of my campus office because I liked to see the birds coming to eat bananas and papayas,” Wesley Silva, an ecologist at University of Campinas in Brazil who led the new study, told Mongabay. One day while watching the birds, Silva said, he wondered: “Could they disperse some seeds [embedded] in the banana pulp?”

What started as a “funny pastime” watching birds eat bananas soon became a series of experiments involving Silva’s undergraduate and graduate students that eventually spanned a decade, he said.

The first tests were not very scientific. The team set out fruit feeders laced with amaranth seeds, then set up seed traps nearby to see if they could retrieve the seeds from bird poop. It turned out they could.

So, for the present study, Silva and his students took the experiment a step further with a systematic approach in a nearby 447-hectare (1,105-acre) site. The land is within the Atlantic Forest and surrounded by agriculture, suburban areas, and degraded forest patches. The study site itself was once cleared for cattle pasture, but has since started to grow back and now hosts a mix of native and exotic vegetation.

The team set up suspended feeders, consisting of fiberboard platforms atop wooden poles, as well as plastic dishes for ground feeders. They then embedded native Cecropia hololeuca seeds into a medley of fruits — such as bananas, papayas and avocados — first removing the seeds from any non-native fruits. C. hololeuca, a native pioneer tree with silvery-green parasol-like leaves and skinny elongated fruit known as “snake fingers,” was cleared from the site decades ago. It relies on birds and mammals to spread its seeds, making it an ideal candidate for reintroducing to the area. To avoid habituating animals to the feeders, the researchers only set out the fruit only once a week.

The researchers also set up camera traps near the feeders and seed traps around the study site to retrieve some of the seeds dispersed by the frugivores. After collecting the seeds, the researchers successfully germinated them in the lab, showing their potential to take root in the wild.

At least 24 species of mammals and birds visited the fruit feeders, from toco toucans (Ramphastos toco) and great kiskadees (Pitangus sulphuratus) to weasel-like tayras (Eira barbara) and black-tufted marmosets. Silva was even surprised to see a maned wolf (Chrysocyon brachyurus) make off with a persimmon, inspiring a new research project investigating the foraging behavior of wild canids in the area.

The ISD technique needs more fleshing out before reforestation projects can deploy it, according to one expert. Getting animals to scatter seeds across a wide area is critical, “but once they get there, there’s a whole host of other factors that limit whether the seeds establish,” said Karen Holl, a tropical restoration ecologist at the University of California, Santa Cruz, who was not involved in the study.

“If you want to say that your method is going to help restore forests,” Holl told Mongabay, “then you have to demonstrate that not only do you get the animals and the seeds out there, but the seeds actually establish, and you need to compare it with where you’re not using that method.”

Silva acknowledged the importance of measuring the impacts over time. His group is now designing a study to test out ISD across a larger landscape and to document whether the target plants do in fact regrow. To Silva, a key point of his current study is to show that complex ecological interactions among plants and animals are essential to restore or maintain a fully functional ecosystem.

With ISD, he said, “You can not only explore this amusement aspect, the joy of watching birds and animals getting food, but also make people aware of an important natural process like seed dispersal. It’s important to connect people to nature through a very simple and familiar thing.”

This article by Emily Harwitz was first published on Mongabay.com on 9 February 2021. Emily Harwitz is a science and environmental journalist. Find her on Twitter at @emilyharwitz Lead Image: A maned wolf (Chrysocyon brachyurus). The species was a surprise visitor to the ground feeder, inspiring the lead researcher, Wesley Silva, an ecologist at University of Campinas in Brazil, to design a research project on maned wolf foraging behavior. Image by Cloudtail the Snow Leopard via Creative Commons (CC BY-NC-ND 2.0).